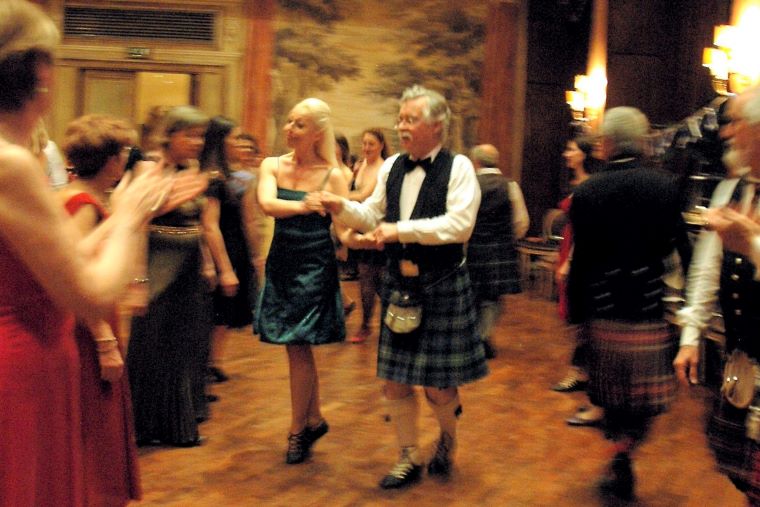 While he has been a resident of Italy for the last 45 years, dancer John Murphy is nothing if not a pure Scot. Exposed to a variety of Celtic arts from a young age, the septuagenarian’s first interest was playing and performing folk music.

“Initially, dance was just another school subject, and there wasn’t a lot of choice involved,” he recalls via email. “I was ten when I started dancing and then, as a teenager, I really only danced on special occasions, like weddings or parties. I was more interested in playing folk music at the time. Even though folk musicians and folk dancers were listening to similar types of music – albeit played in very different styles – the two worlds rarely saw eye to eye and therefore rarely met.”

After moving to Italy in his mid-20s, where he performed as part of a small folk band, Murphy’s interest in dance took center stage.

“It came as a surprise to me, but a lot of the people who came to listen to us play wanted to dance at the same time. That is when I started teaching simple ceilidh dancing.”

Simple ceilidh dancing (SCD) is a popular style seen most regularly at ceilidhs and other celebrations.

“There are essentially three ways of doing Scottish dancing: there is ceilidh dancing, where some know the moves, but many do not, and dances are simple, explained beforehand and called during execution. The results can be a lot of fun but tend to be chaotic. There is also Scottish country dancing, where people have generally taken courses in SCD, know the dances, and do them reasonably well. Then there is the Royal Scottish Dance Society (RSCDS) way – a rigorous approach that, at least among purists, quite possibly repels as many people as it attracts.

“The important thing is to dance to best of your ability. That is what most Scots do, and that is where I am.” 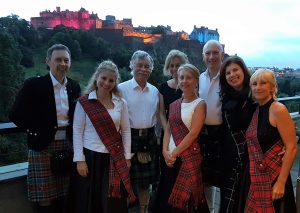 Murphy’s commitment to teaching dance was on and off until the early 90s, when he inherited the Milan St. Andrew’s Night from his friend and fellow dancer Jim Healy, who was moving home to Scotland. After witnessing dance lose traction in the months following Healy’s departure, Murphy grew more serious about his role as a dance teacher, and eventually opened his own company – the Milan Scottish Country Dancers ASD.

“Most of my students are Italian, with ages ranging from 36 to 73. We are a friendly group of people and have a lot of fun at our Monday evening classes. Our repertoire is now getting close to 100 dances, more than the basic 12 dances that I used to teach. I now concentrate on teaching the dances that I have chosen for our next Scottish event. So, the fall course leads up to St Andrew’s Night in November, the winter course prepares for Burns Night in January. And the spring course gets us ready for our Milan Highland Ball in May. Given that each event has around 16 dances, with only a minor degree of overlap, there is a fair number of dances in a year!”

He admits that is can be challenging to appease both his quick-learning students and the ones who prefer a slower pace.

“I have many students who wouldn’t mind the rigour of the RSCDS approach, while there are others who just want to enjoy themselves. Those who come once, even twice a week, and watch videos in the meantime, while others come every other week and do no homework at all. We also must reconcile experienced dances with total beginners. We have resolved some of these problems by splitting the course into three different sessions.

“At the end of the day, the biggest reward is seeing the smiles on people’s faces when they manage to do a new dance properly.”

Unsurprisingly, the ongoing COVID-19 pandemic has had an effect on Murphy’s efforts, with several upcoming performances postponed or cancelled.

“This year looks tricky, but I have reasonably high hopes about restarting in September. So, after months of lockdown, with zero dancing – and with food and drink as compensation and the kilos mounting up as a result – some of us are thinking of taking up Scottish step dancing. Maybe that could that be the solution?”