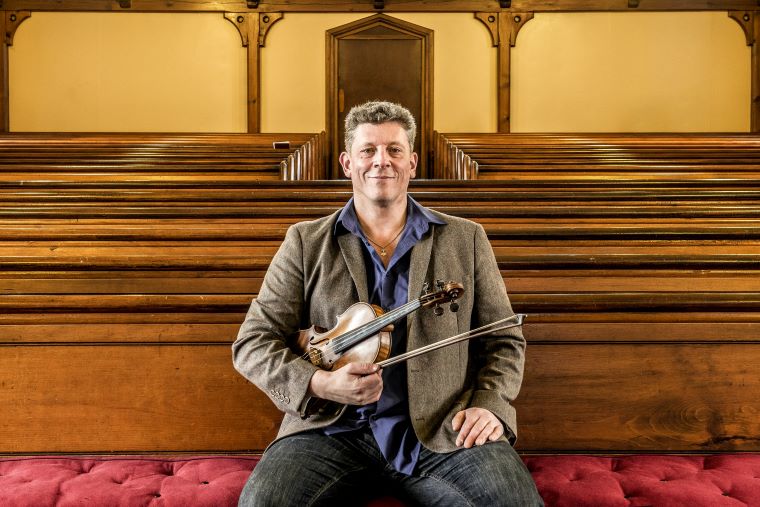 Paul Anderson’s introduction to the fiddle sounds like something out of a children’s book: while visiting his grandparents at their farmhouse in Mains of Kincraigie, near Tarland (the house he lives in today), the then-5-year-old boy explored every nook and cranny in the home before spotting a treasure beneath a spare bed.

“I found an old fiddle under there,” he recalls via email. “I developed a fascination with the instrument almost immediately, and regularly disappeared upstairs to pull it out from under the bed when visiting my grandparents. Eventually my granny said that if I learned to play, I could keep the fiddle.”

The instrument was a natural fit for Anderson, who came from a long line of four-stringers. His grandmother’s family, the Cromers, had connections to Peter Milne – known also as the “Tarland Minstrel” – teacher to Scottish musical legend James Scott Skinner.

Anderson – who has now been playing for over four decades – notes that the reasons he continues to play are the same as when he started.

“I love the sound of the fiddle. I also grew up with a strong interest in Scottish history and learning to play Scottish music was a large part of why I wanted to learn the instrument: it is an expression of my culture and heritage.”

He even plays the same instrument he found beneath his grandparents’ bed all those years ago. “It is a fine French instrument, made in 1893 by (Charles Jean Baptiste) Collin-Mezin and lends itself well to my traditional style and sound. 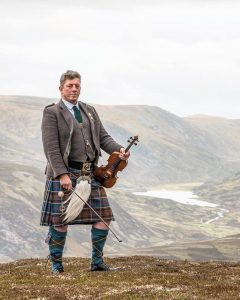 “I took lessons in Scots fiddle for six months from Angus Shaw of Banchory, a well-respected tutor, before studying with Douglas Lawrence, who was the most acclaimed pupil of Hector MacAndrew with whom I studied for several years. Hector was regarded as Scotland’s finest traditional player of the 20th century and could trace his musical lineage directly back to Niel Gow, the father of Scottish Fiddle Music. Hector even gave (violinist) Yehuidi Menhuin lessons in Scottish Fiddle. As a player with the Banchory Strathspey and Reel Society, I also played with great older players with whom I learned a lot from without realizing it.”

His career has been filled with several notable highlights, including a ten-week U.S. tour in 1992.

“It was quite an experience. We performed to audiences from between 250 to 12,000 and did 53 concerts in 29 States. I also won Scotland’s most prestigious fiddle competition, the Glenfiddich Scottish Fiddle Championship in 1995. I played at Sean Connery’s 80th birthday party in Edinburgh Castle, and have two collections of my compositions published. I have also performed regularly for the Queen and all the senior members of the British Royal family and, as she is the Head of State, that is a huge honour regardless of whether you are a Royalist or Republican.”

All these achievements have not gone unnoticed and, today, a life-size painting of Anderson hangs in Scotland’s beautiful Aberdeen Art Gallery.

Although he believes there are more young people playing today than ever before – noting the contemporary and distinctive styles emerging throughout Scotland – Anderson says more can be done to preserve Scottish culture at whole.

“What needs to be improved is support for the Scots language. It lags behind Gaelic. Other than BBC Alba, which features mostly Gaelic speaking artists, there are very few outlets for traditional Scottish music and song in the mainstream media. Thus, if you are not a Gaelic speaker, like most folk in Scotland these days, there are virtually no outlets other than a couple of weekly radio shows for hundreds of traditional musicians and singers. And, if you are from the North East or the Eastern half of Scotland, unless you perform in a trendier and more contemporary style there are virtually no conventional outlets. Unfortunately, that means that most people here are not fully aware of their own culture and heritage.”

As expected, Anderson’s live performances have been put on a temporary hiatus due to the ongoing COVID-19 pandemic. Nonetheless, he remains focused on connecting with his audience.

“I have been doing online concerts each week on Facebook, as well as a weekly fiddle workshop. I am also writing music and have started work on a second symphony to accompany my first based on the Poems of Ossian. I am due to perform in California in October but that is looking more unlikely. Things have been changing so quickly that it has become increasingly difficult to plan ahead. That said, I continue to play to preserve the past.”