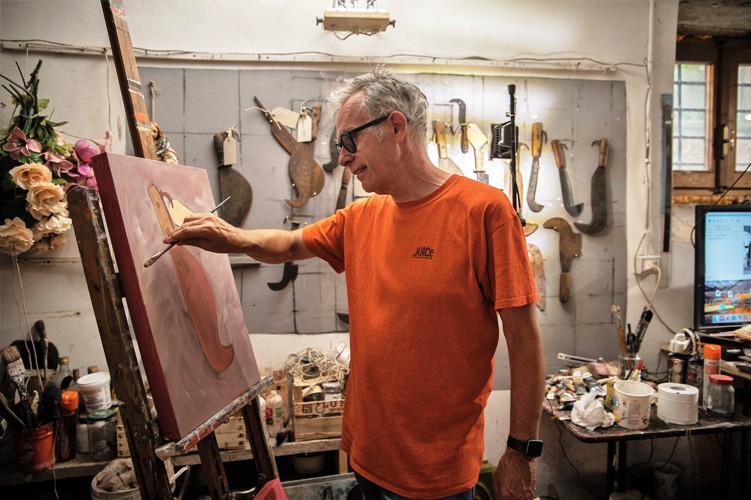 I first met the artist Keane quite by chance while enjoying a morning coffee at Aristodemo Casciani’s bar – known as Aristo’s – in Barga’s Piazza Salvi. It is remarkable how slowly the world turns under a hot Tuscan sun and striking up conversations with strangers is part of what breathes life into these medieval streets. I explained to him that I wanted to discover Barga’s history and its people. Keane sat back, took a sip of his coffee, and replied “Don’t go looking for Barga; it will come to you.” It did.

Aristo’s is considered by many to be the cultural hub of Barga, and the theatre of life plays itself out here for those who watch. As Keane and I chatted there was a steady flow of pedestrians through the small piazza: greetings were exchanged, pleasantries passed, stories told, photographs taken, and memories made. English is spoken widely, but after a while you begin to understand moments of Italian conversation too. I was to discover that it is his acute awareness of a ‘sense of place’ that defines Keane’s work. 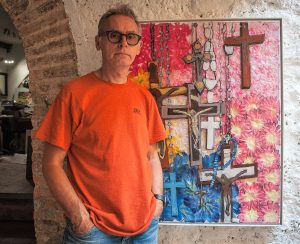 opened gallery, OXO Collection. It was here that I saw my first Keane artwork. It was a large, wrinkled canvas with a painted green border framing a big, black, Billy-goat. It is an angry piece: the horns and rough brushstrokes creating an aggressive dynamic and, even without eyes, the black head stares menacingly out of the canvas. In each corner of the painting was an eyelet with a piece of cord attached. Keane grasped one of the cords. “This piece was never meant for a gallery. It was intended for suspending over an outdoor space that belongs in my past. The goat is King Billy (William of Orange) and the green border is Ireland. I created this when I was an angry young man and, although it is about Northern Ireland, it was painted in 1983 when I was a Labour party activist living in England. It reflects the frustration and anger I felt about the political climate of that time. I left the U.K. shortly after that and – except for a few infrequent visits – have never returned.”

Keane was born in London in 1956; his parents hailed from Co. Kerry, Ireland. He left home at fifteen and, amongst other jobs, laboured on pig farms, chicken farms and wood yards across the south of England before managing a pub and restaurant outside Cambridge and, later, overseeing a Singer sewing machine shop in Redditch in the Midlands. After leaving Singer he enrolled in adult education classes studying pottery, ceramics, art, English literature and Sociology. He then attended Stourbridge College to complete a degree course in Fine Art. While studying art he explored the world of street theatre, learning the basic skills of fire eating, unicycling and escapology. After graduating, he returned to London, working briefly for a transport company before buying an old London ambulance and, along with five friends, converting it into a travelling theatre – Lord Lucan’s Travelling Box. It was the early 1980s and the group drove to Fontainebleau, Paris, where they practiced their act for two weeks before taking it on the road across France and Spain. He fell in love in Aix-en-Provence where he stayed for a time breathing fire for a living before eventually returning alone to the U.K.

In 1985 he moved to Tuscany. “I found cheap accommodation not far from Barga and I had enough money to stay for one year. I painted local landscapes and held my first exhibition at the end of that year.” He sold enough work to enable him to extend his stay another year – a pattern that would play itself out for the next seven years. In the village of Fosciandora he organized an art exhibition promoting female artists whose work he felt was undervalued at the time. One of the artists became his wife. By the early 1990s, Barga was growing and the couple moved into a house in the historic part of town. At first Keane hated the sense of enclosure and desperately wanted to move back to a rural lifestyle. However, two years later he made the decision that it was ‘Barga or me’ and embraced the town.

“I changed overnight. I realized the extent to which I am a community artist. Once I immersed myself in the town and its people, the inspiration and the art flowed.” 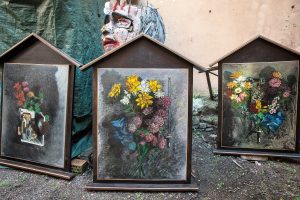 In another part of the gallery Keane addressed a large square canvas comprised of sixteen, smaller canvases – each depicting a traditional glass filled with varying amounts of red wine.

“When I first came to Barga, Aristo’s only served red wine in these glasses. Now it serves Aperol Spritz in fancy glasses to tourists. I painted this because none of these glasses is left here and we are losing part of our culture and identity. It used to be that you could identify a man’s politics from the way he ordered his wine. If he asked for black wine he was a fascist and if he asked for red wine he was emphasising that he was not an outright fascist sympathiser and probably leaned towards socialism – either way he got the same red wine in the same glass!”

We left OXO Collection and walked the short distance to Keane’s studio – a creative array of canvases, paints, brushes, objects and unfinished paintings.

It was a series of religious works incorporating plastic that caught my attention, however. Keane explained that these shrines and religious images were the result of a local man’s death in a tragic motorcycle accident last year.

“I noticed the place of the accident was marked with plastic flowers and that made me realize that so many of our roadside shrines have become repositories for plastic – be it flowers, candles, or other items of religious iconography. The same is true in some churches. What does that say about how we value life, death and religion?” It did make me ponder the essence of being, how we attribute meaning to objects and what plastic signifies.

On the wall of the studio hung a collection of curved knives called pennati. These local pennati have their origins thousands of years ago as traditional weapons and agricultural tools. With modern equipment, and less people working the land, the pennati is becoming redundant. Keane is borrowing these from local families to record them and create artworks before another piece of history is lost. He showed me a similar project he undertook using local spades called vanghe. These were once vital for turning soil to grow crops and had been used since Roman times. Inspired by his medieval surroundings, and the fact that Italy is regarded as the birthplace of Tarot, Keane recreated a series of oversized Tarot cards based upon the revered ‘Tarot of Marseilles’ deck dating to 1760. Painstakingly researched, these striking works were sold recently to a private collector. 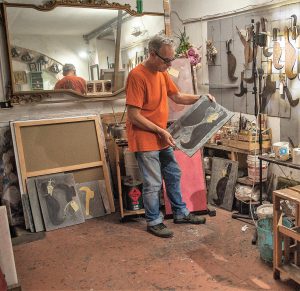 Keane’s work draws from the local community, strives to serve it, and also provides outreach through what he calls ‘intelligent tourism’.

In 1996, he founded the highly successful Barga News – an arts-based website that aims to educate visitors and inform locals. It was the first online news site in Tuscany, and is a work of art in its own right. Ten years ago, he was instrumental in getting informative QR codes – 2D bar codes that can be scanned and read with a mobile phone – installed at various locations throughout Barga. It was the first installation of QR codes in a historic centre in Italy. His photography – focussing on the special relationship between Barga and Scotland – has appeared in exhibitions at the Glasgow Royal Concert Hall and the Scottish Parliament in Edinburgh. Also, when he isn’t creating artworks he can be found playing the bodhrán in a local jazz/swing band called the Aristodemos.

And though Keane’s work may be founded in Barga, its depth and resonance reaches far beyond the boundaries of this small and very beautiful town.