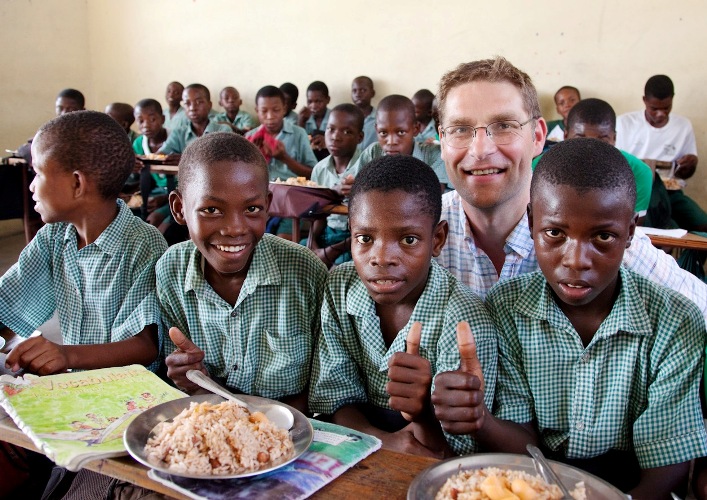 What was once a corrugated iron backyard storage shed is now the head office of an international charity called Mary’s Meals.

Located on the west coast of Scotland, the picturesque village of Dalmally (population 400) is an unlikely centre from which to launch a major humanitarian effort.

“None of us are doing anything very spectacular, but through many small acts of love hungry children are being fed,” points out MacFarlane-Barrow, while on a recent speaking tour of North America.

Each school day, Mary’s Meals provides a nourishing meal for children attending classes around the world; in Haiti, it is rice and beans; in South Sudan, there is sorghum and beans, and in Malawi students are served a vitamin-enriched maize and soya porridge. All food is prepared and distributed by community volunteers – 80,000 of them in Malawi alone – and, wherever possible, Mary’s Meals purchases produce from local farmers.

“Our goal is that every hungry child should receive a meal in his or her place of education.” 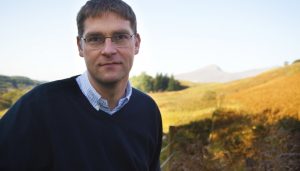 “As the program grows, I believe this vision is actually possible. To me it is baffling that children are dying of hunger in a world of plenty.”

MacFarlane-Barrow – a devout Catholic father of seven children – is both a “CNN Hero” and has been named to Time Magazine’s List of the 100 most influential people in the world. The laurels do not rest easy on the shoulders of a man who insists he was painfully shy when he began working with relief organizations.

“There have been occasions when I have felt a bit like a fish out of water. I am uncomfortable being singled out, when Mary’s Meals is the work of many people doing what we can. However, I am always grateful for an opportunity to tell our story.”

The simplicity of Mary’s Meals makes its effectiveness easy to gauge.

“After a short time we began to get reports from schools where we are serving meals showing that more children are coming to school and that daily attendance is better. Soon after, we received reports that academic progress was improving. It is not hard to understand that a child who is fed properly is going to do better at lessons.”

He adds that children who remain in school and receive a basic education become employable.

“These are the children who will ultimately pull their nations out of poverty, and it will happen because they were fed.”

In 1992 MacFarlane-Barrow and his brother, Fergus, met for a pint in a Dalmally pub after both had watched the horrors of war-torn Bosnia on television news.

“We decided to call for donations of supplies, and we would drive them to the people who needed them. It was the first time my brother and I ever hatched a plan in a pub that actually happened.”

Donations poured in from friends, neighbours and beyond, and the brothers took time off work to drive the goods to relief agencies in Bosnia.

“I thought we had done our one good deed and that would be the end of it, but donations continued to pour in.”

MacFarlane-Barrow prayed for guidance before giving up his job and selling his home to drive relief supplies to Bosnia fulltime.

“I decided I would do this as long as supplies kept coming in. I thought it would be for a few months, but the Scottish people are very generous to those in need. The donations were so great we had to set up a registered charity.” 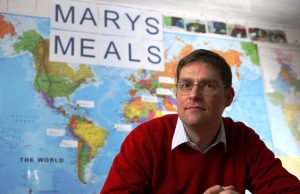 He made connections with a variety of local aid agencies, as well as with a young Scottish nurse who had also given up her job to bring aid to the Bosnians.

“I met my wife Julie driving a truck to Bosnia. If she didn’t share my passion for the work we’ve continued to do none of it would have been possible.”

After a decade of bringing aid to suffering people in troubled countries, which has included opening a home for orphans and setting up primary health care clinics, MacFarlane-Barrow was moved to change the focus of the international charity, renaming it Mary’s Meals in 2002. While staying with a priest in Malawi, he visited a mother who was dying of AIDS with her six children gathered round her.

“I asked her son, Edward, about his hopes and dreams. He told me that he would like to have enough food to eat and to go to school one day.”

The encounter crystallized something MacFarlane Barrow had witnessed throughout his aid efforts – children were staying out of school because of hunger.

“I began to see that with one simple act we could accomplish two things; we could meet the immediate need of a hungry child for food, and we could provide a much-needed basic education, which is the best tool for climbing out of poverty.”

From that first school to the thousands that have followed, community participation is an essential component.

“The school community must be willing to take responsibility for the operation of the program. We provide the funding but it must operate locally. Fortunately – as can be seen from our growth – that has not been a problem.”

It was MacFarlane-Barrow’s strong Catholic faith that first perked his interest in Bosnia back when it was a part of Yugoslavia. At 14, he was the youngest of a small group of teenagers to travel from Scotland to Medjugorje, following reports that the Blessed Virgin Mary was appearing in apparitions to teenagers.

“It was well before people began going there in large numbers to visit the Marian shrine. We stayed a week in a farming village and became very close to the people.” 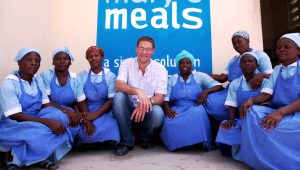 When he and his siblings returned home, their parents were struck by the impression the trip had made on their children and followed up with a visit of their own.

“After returning home, they converted the small hotel they were running to a retreat house, Craig Lodge House of Family Prayer, which still operates and remains a great support to Mary’s Meals.”

More than 25 years into relief work, and dealing with millions of dollars in aid annually, MacFarlane-Barrow is still touched that the majority of donations are relatively small.

“We get a great many donations from young children who don’t prevaricate when they hear our message. They are shocked that, in a world of plenty, there are children who go all day without a meal – and they want to be a part of changing that.”

MacFarlane-Barrow’s book, The Shed that Fed a Million, is another way that he has spread awareness about Mary’s Meals. It has also served to ensure that the organization remains true to its founding values and ethos.

“I believe that our work has just begun. There are still 66 million children out of school around the world because of hunger.”