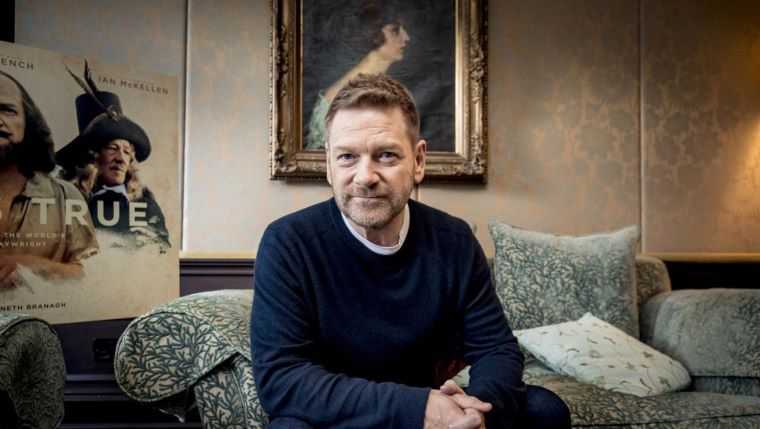 Kenneth Branagh has been thinking about making a film about his childhood in Belfast for a long time. But it took a pandemic for the 60-year-old director to realize it was time. “I found that this lockdown really triggered something for me that reminded me of a fragility in our lives,” he shares. “I felt obliged and compelled to finally revisit this moment.”

The moment was the summer of 1969, when an eight-year-old Branagh’s life was changed forever by the Troubles, the decades-long political conflict between Irish Catholics and Protestants in Northern Ireland. “In a way, innocence was lost, things would never be the same again,” he says, reflecting on that time. “It’s something I’ve been trying to understand, as I grow older, that it was a moment when the world tried to insist that you put away childish things and demanded that you are dragged into this perilous adulthood.”

Belfast, which will play at the Toronto International Film Festival on September 12 before Focus Features releases it in theaters November 12, recreates that moment in black and white and via a nine-year-old boy named Buddy (newcomer Jude Hill), whose idyllic childhood in Belfast is taken from him as his parents (played by Jamie Dornan and Caitríona Balfe) and grandparents (Judi Dench and Ciarán Hinds) attempt to protect their family among increasing violence and danger. And while the film includes plenty of drama and emotional moments, Branagh has sewn in moments of quick-witted humor and lightness that he says perfectly encapsulate his memories of that time.

The small-scale Belfast is a stark shift from Branagh’s signature directorial efforts, which, whether Shakespeare adaptations (Much Ado About Nothing, Hamlet) or giant crowd-pleasers (Thor, Cinderella), have largely been generously budgeted studio efforts. Indeed, after he started writing the script in March 2020, the first people he showed it to were his brother and sister, who had a very emotional reaction to it. “They were very supportive,” says Branagh. “But my sister said to me, ‘Wow, for a very, very private, quiet man, you really put it out there, haven’t you?’ So I guess I did. Sometimes it has to happen that way. Sometimes I think things have to come out.” 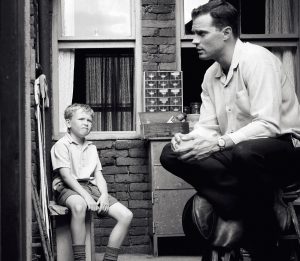 Belfast opens with a powerful scene in which Buddy is walking down the street in his quaint neighborhood, with all the neighbors greeting him warmly by name. It’s clear he’s beloved by the small community. Suddenly, around the corner comes a loud, angry mob, set on attacking the homes of Protestants living on the streets. Buddy is swept up in the mob until his mother is able to grab him and bring him into their home, just as the rioters light a car on fire and it explodes in a fiery blast. It’s an affecting scene that quickly establishes how Buddy’s safe existence has forever changed—and it’s pulled from Branagh’s memories. “I remember I thought I was hearing a swarm of bees, I didn’t understand why it should be so loud,” he says. “And then it was just this mob. Overnight, that security has gone.”

The town swiftly builds up a barricade manned by its residents, while many, including Buddy’s family, grapple with how to stay safe. Buddy’s father is away often, working in England, and coming home every couple of weeks. He wants them to consider moving out of Belfast, to either England or somewhere else for a fresh start. “The last time I really remembered, and thought that I knew who I was, was when I was back in Belfast,” says Branagh, who moved to Berkshire, England, with his family soon after the summer of 1969. “There was such a settled sense of identity, a sense of place, and a knowledge of your relationship to the world.”

Branagh focused on authenticity to cast his parents, bringing in Northern Ireland native Dornan—best known for the Fifty Shades of Grey franchise—to play his father. “He greeted the script like it was an old friend,” says Branagh. “You could feel the excitement in his voice, that he felt he knew this person.” And while Balfe, known for starring in the Outlander series, was born in Dublin, her family later relocated, and she grew up near the border with Northern Ireland. “So, she knew about the challenges of uprooting,” says Branagh.

Buddy also has a deep relationship with his grandparents, who he often spends time with after school. In casting his grandmother, Branagh turned to Dench, whom he’s worked with for years on films including 1996’s Hamlet, 2018’s All Is True, and 2020’s Artemis Fowl. Because of Dench’s vision loss, Branagh read the script aloud to her, and he says Dench gravitated toward it because she had earlier in her life traveled to Ireland with her own parents who had grown up there. “It’s this kind of eternal song of the Irish, the immigrant’s song, that has them moving away for various reasons. It just goes very deep in the DNA of the culture,” he says. Hinds, who plays Buddy’s grandfather, grew up down the street from Branagh’s childhood home, Branagh says. “He kind of recognized his own father in this character,” says the director. “That allowed each of them to make it quite personal.”

But even when he felt sure he had found the right actors to play his parents and grandparents, Branagh knew that the film rested on finding the right young actor to play his onscreen doppelganger. “It was always so clear that it couldn’t work if you didn’t find a way to connect very strongly with Buddy, who is so named, as a friend to the audience, to be the everyman who takes you by the hand through this story,” he says. Branagh was looking for someone who had energy and loved running around but was also a thinker and had a “slightly older head on his shoulders.” 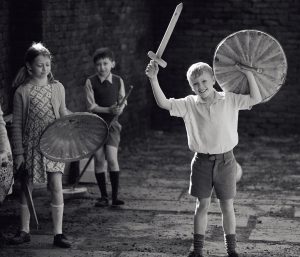 “He had to be very naturally himself, and then, paradoxically, also be very attentive about how to be specific with certain moments in the film,” says Branagh. He found that in Hill, a 10-year-old from Gilford in Northern Ireland. While Belfast is Hill’s first major production, Branagh says he was able to watch Hill’s talent blossom as shooting progressed. “He was very much a rough diamond across the audition process,” he says. “But I’ve rarely seen someone pick up what is required so swiftly, and with such alacrity.” Hill learned the most from his onscreen grandmother, Branagh says. “I felt as though Jude Hill at the Judi Dench acting academy was a sight to behold,” he says. “She asked him for tips about the accent, and he asked for just about everything else.”

Even as a period piece, Belfast includes an eerie number of parallels to our pandemic age: feeling unsafe to leave your own home, losing a previous comfortable reality, and the hard decisions that need to be made about how to keep your family safe. Says Branagh, “In this last 18 months or so, there’s been this profound disturbance to what, in retrospect, was this innate comfort of the routine, in what might’ve felt like normal lives. And suddenly, you live with this thing that human beings just don’t like: uncertainty.”

One of Branagh’s comforts during that time was moviegoing, and Belfast is also an ode to the movies. One of the few times colour is included in the black-and-white film is when Buddy and his family go to the movie theater. Branagh chose to feature films from his own childhood memories, including One Million Years B.C. and Chitty Chitty Bang Bang. “The cinema, for me, was one place where the screen engulfed you so totally that you could, for those moments, forget,” he says. “You could feel safe, away from the mayhem.”

It’s a feeling that many have been seeking as the emotional toll of the pandemic drags on. And it was that feeling that pushed Branagh to finally tell his story. “It felt like the movies, and that experience of big-screen movies, they gave me a new home—in fact, the home that I’ve been living in for a large part of my adult life,” says Branagh. “When I started to write this movie, it felt like it’s about time to go back to my real home.”