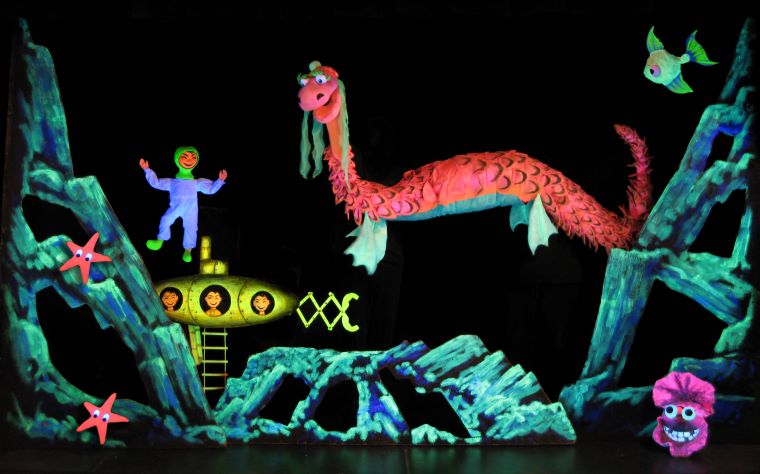 In an age of computers, tablets, smartphones, and sophisticated gaming consoles, you may be forgiven for thinking that the ancient art of puppetry must have succumbed to the onslaught of modern technology. However, a small, family-run puppet-theatre company in Scotland understands and appreciates that there is still a fascination with this old-school form of storytelling.

Biggar Puppet Theatre is the home of Purves Puppets and is the realization of a lifetime of dreams and effort by Ian Purves, aided and abetted by his wife Jill and their children Colin and Victoria. Purves can trace his fascination with puppets back to some of his earliest childhood memories. His parents were teachers; his father was Scottish and his mother English, and they spent some years in India prior to Purves’ birth in Islington, London. Soon after, the family relocated to Hawick in the Scottish Borders where they settled. It was there, at around the age of four years, that Purves started to take an interest in puppets, perhaps influenced by the Asian art and artefacts brought back from his parents’ travels that adorned the family home.

This was also an era of few television sets and families made their own entertainment rather than having it streamed into the home. With teacher parents, the Purves’ house was a place that inspired fun learning and imaginative exploration, and puppetry was a perfect outlet for the creative imagination of a young boy.

As a child Purves’ early puppets were made from just paper, cardboard, and string, but they would become ever more interesting and complex as time went on. His father built him a little stage from plywood complete with painted scenery and a miniature lighting set-up, while his mother helped him write storylines, and with a gramophone player providing suitable background music, they would put on shows.

It soon became the norm that a puppet show was part of the entertainment whenever friends and family gathered. 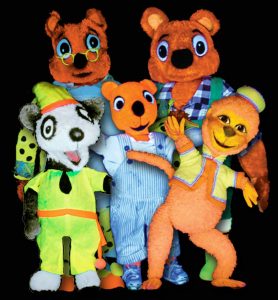 Meanwhile, future wife Jill had been born in Plymouth but brought up in Dunfermline before her family relocated to Hong Kong where she lived for three years. Like Ian, she was influenced by cultural traditions of the far east, developing a special enthusiasm for dressmaking before returning to Scotland.

They were destined to meet at Edinburgh University where Ian was studying for an honours degree in English Literature, while at the same time running a university puppet club. By now he was performing with his puppets at Edinburgh Fringe Festival, and their collective interests in puppetry and dressmaking made for a perfect combination as they began creating their own productions. They married in 1970, set up home in Edinburgh, and during the same year Purves Puppets was born as a professional enterprise. This would be followed by a son, Colin, and a daughter, Victoria. Ian initially worked as a teacher and in his spare time put his literature degree to good use writing his own puppet theatre scripts, including ‘I-don’t-know-what, from-I-don’t-know-where’ – an adaptation of a famous, Russian folktale. This became their first professional production and their respective parents assisted with the show. They soon made their mark on the Edinburgh scene and – on the back of appearances at the Fringe – it wasn’t long before the Purves Puppets name began to spread internationally.

The children were involved from a young age and travelled with them as they took their shows on the road in the U.K. and abroad. Under the auspices of the Queen Noor of Jordan Foundation that promotes cross-cultural links between countries they were invited to perform in Jordan and Syria. There were also invitations to showcase in Singapore, Hong Kong, and Taiwan, where they performed in the National Theatre in front of an audience of 2,500. Other countries included Spain, Italy, and Malta, and they were the amongst the first westerns to perform in Poland, behind the Iron Curtain. Although Ian wrote the scripts, he made sure that the accompanying storyline was recorded in the native language.

“It was important to us that our act was easily interpreted by whatever country we were performing in and relevant to that specific audience. For that reason, we avoided storylines or gags that might be interpreted as having a political slant.”

They learned over the years that interest in puppetry, like many forms of expressive art, can come and go and is subject to both changing national tastes and the influence of new things that come on the scene. As Jill explains, “Puppetry is a greater part of the culture of Slavic countries than here in the U.K., but when something like Jim Henson’s Muppets or the British satirical Spitting Image show comes along then there is a resurgence of interest in puppetry.”

Although the family had moved from Edinburgh to resettle in the village of West Calder in West Lothian, their desire to promote the art of puppetry was still driving them towards new goals – particularly the idea of establishing their own theatre. It was Jill who found a property in Biggar – a town in the former burgh of South Lanarkshire in Scotland’s Southern Uplands and, importantly, located midway between Edinburgh and Glasgow. The property was an attractive family home that also had an adjacent coach house that could be converted into a puppet theatre. They acquired the property and Biggar Puppet Theatre was created. 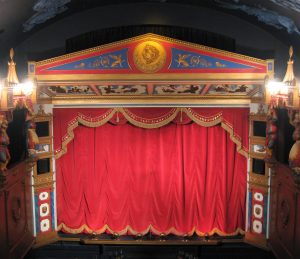 With experience in most types of puppetry, they now specialize in productions using Black Light where scenery and characters are illuminated using ultra-violet light and the operatives, clad in black, can move about unseen. For Ian it is a method that reflects vivid colours, draws viewers into imaginary worlds, and enhances the experience, “It is not without its problems though, as it is all too easy for black-clad puppeteers to trip over each other on a dark stage.”

Productions were family affairs with Ian and Jill writing the scripts together and all family members recording the voices. Jill and Victoria created stunning costumes for puppets, and Colin becoming increasingly involved in the technical side with special effects, lighting, and sound. Victoria is the Grand puppeteer, holding all the strings of the business together. Over the decades they have worked alongside some of the most famous names in Scottish show-business, including Andy Stewart, Jimmy Logan, and The Krankies. Purves Puppets has spent years promoting Scotland and aspects of its popular culture to international audiences. The Loch Ness Monster – Nessie – has been seen on stages across the world and Scottish music has been heard – and sung – by many foreign audiences. As a family they are cultural ambassadors and continue to entertain audiences worldwide. Now in their 80s, Ian and Jill have concentrated their efforts at Biggar Puppet Theatre, where they also offer puppetry workshops and tend to a shop, a tearoom, and a playpark.

Colin has taken the skills he inherited and has moved on to working with some of the biggest names and companies in film and stage productions. He has operated puppets in Star Wars, Jurassic Park, and The Muppets, but also works on other aspects of computer-generated imagery and special effects. He still lives locally and assists with family productions whenever possible.

As with many businesses, it has been a difficult period for Purves Puppets with the theatre closed due to COVID-19 lockdown. They have used their website and social media to continue reaching out to audiences with online theatre, backstage tours, and productions available for download. As the world starts to open up, Jill is excited to get back out doing what she loves most – entertaining audiences with puppet shows. Ian agrees enthusiastically, adding “We would love to have the chance to perform in North America. It is one corner of the world where Purves Puppets hasn’t yet been staged!” ~ Story by Tom Langlands