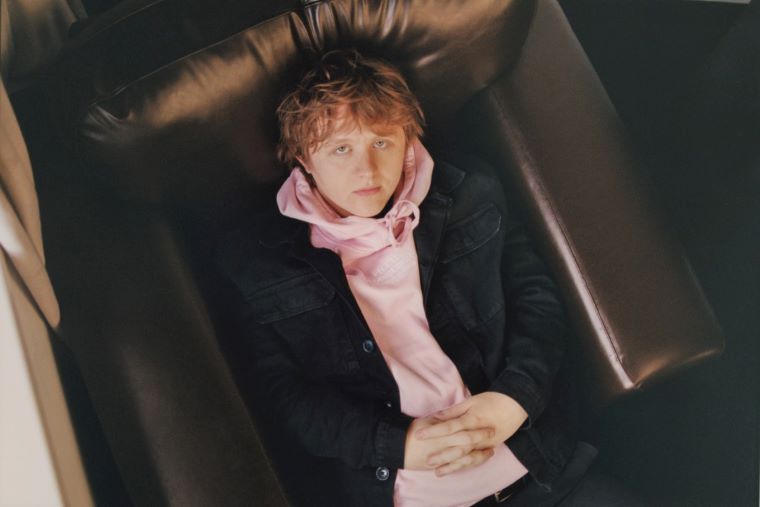 It’s been 12 months since Lewis Capaldi released Divinely Uninspired to a Hellish Extent, the wildly successful debut album that turned him into pop’s reigning prince of heartbreak and despair. In those 12 months, the 23-year-old Scottish singer-songwriter with the almighty bellow has played shows around the world, conquered the charts, and earned both his first Grammy nomination (Song of the Year, for the smash hit “Someone You Loved”) and the kind of ubiquity that makes you think his music was built into the foundation of every grocery store, pharmacy, and fast-casual restaurant in the world. Twelve months of all that, and now Capaldi is exactly where he should be: living at home with his mom and dad.

“I’m ready to literally fight my parents,” Capaldi says from his home in Bathgate, Scotland, a small town between Edinburgh and Glasgow. “It’s gonna come to a showdown between us before the end of this, and I’m quite glad for it.”

Are they ready to throw down, too? “Oh, for sure,” he says. “My dad’s been doing push-ups around the house. And then I saw my mum polishing some knuckle dusters. I thought, ‘Right, I better watch out.’ So I’ve been doing some squats.”

Back in March, days before the COVID-19 crisis forced him to start sleeping in his childhood bedroom with one eye open, Capaldi played a pair of sold-out shows at London’s Wembley Arena, two of the biggest of his career. Next, he planned to take a victory lap: a North American arena tour opening for Niall Horan, some U.S. headlining dates in July, and top billing at several major U.K. festivals (Isle of Wight, Parklife, Leeds). Pretty much all of that has now been scrapped or postponed because of the pandemic, and Capaldi figures that this has become his longest stint off the road in at least three years. But he notes that he was lucky enough to be at the end of his album cycle, as opposed to someone like Horan, who’d just released a new LP in March. And, he adds, “I’m more upset about my touring crew, not my own momentum — I’ve done well enough.”

With no shows on the horizon, Capaldi has offered up a new live EP, To Tell the Truth I Can’t Believe We Got This Far. Released last week to coincide with the one-year anniversary of Divinely Uninspired, it collects six performances that became fan-favorites on YouTube, and Capaldi calls it a “little thank you” to fans. But, he adds, the track list also reflects some of the pivotal turning points of his past few years, from a cover of Lady Gaga and Bradley Cooper’s “Shallow” during a BBC session a few days after the release of “Someone You Loved,” to a crowning performance of that latter track at the 2020 Brit Awards, where his signature hit also took home Song of the Year. 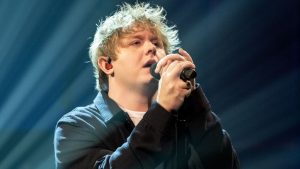 With Capaldi’s swift rise and huge success in mind, it makes sense when he says he’s come to view the current lockdown as a sort of “blessing in disguise.” Before COVID-19, Capaldi was preparing to embark on pop music’s equivalent to climbing Mount Everest with a swarm of murder hornets at your back: making a second album. If there are any nerves, Capaldi doesn’t betray them, but he does have a keen sense of the tension between expectation and the realities of a constantly churning music industry.  “I’m sorry you’ve had to put up with me for this long,” he cracked in a short video announcing To Tell the Truth. “If it’s any consolation to those that don’t like me, most people who have a very successful first album go on to have an absolute shocker of a second one.”

When we first spoke back in March, Capaldi paraphrased the old truism — sometimes attributed to Elvis Costello — that you have your whole life to write your first album, and then two years to write the second. (That’s if you’re lucky; Costello said it was just six months.) Capaldi had begun jotting down ideas for LP2, and he’d hoped to start writing while on the road. Now he’s been afforded the rare luxury of time to plot out his next move and reflect on the past few years of travel, pop success, and still more heartache. And he gets to do so at home, where he can comfortably chart out the next phase of his artistic evolution, while simultaneously exploring other areas of personal growth

Capaldi’s music career began when he started playing pubs around Edinburgh and Glasgow at the age of 11. It was just him and his guitar and his high-pitched voice, and the cute points came in at a steady clip, at least until puberty hit. “As soon as people have an idea that you may have some pubic hair, they start to get really suspicious,” he jokes. For years, Capaldi endured drunk hecklers as he performed sets of covers sprinkled with originals, figuring that if he could slot one of his own songs next to, say, the Killers’ “Mr. Brightside,” and it didn’t elicit a flying pint, he might be onto something. He also learned how to project over the din of the pub as he settled into his new voice.

In March 2017, after attracting the attention of his soon-to-be manager, Ryan Walter, with a handful of SoundCloud uploads, Capaldi released his first official single, “Bruises.” It was a swift streaming hit, quickly racking up tens of millions of Spotify plays. A record deal soon followed (Virgin EMI in the U.K., Capitol in the U.S.), and over the next two years, Capaldi — with the help of a handful of other songwriters — mined a difficult break-up to craft a collection of lovelorn laments and candid self-reflections. He began trickling out songs on two EPs, 2017’s Bloom and 2018’s Breach, before releasing Divinely Uninspired last May.

In the year since its release, Divinely Uninspired has amassed over 1.3 billion streams, according to numbers from Alpha Data, the data analytics provider that powers the Rolling Stone Charts. It peaked at Number 15 on the Top 200 Albums chart in January 2020, and it remains a steady streamer, with 20.7 million song streams for the week of May 8th through May 14th (putting it at Number 29 on that week’s albums chart). “Someone You Loved,” meanwhile, reached Number Four on the Top 100 Songs chart last October while accumulating 803 million total streams.

Capaldi’s appeal is easy to explain: It’s the voice, first and foremost, big and full with hints of his pulpy brogue and the rasp he’s long adored in singers like Joe Cocker and Sia. He lets it rip throughout Divinely Uninspired, and the production — minimal guitar and piano-based arrangements, bolstered occasionally with percussion, strings, and back-up singers — is very much designed to let him do so. But the control to make those moments count is there, as is the versatility to pull it off on power ballads like “Someone You Loved” and “Fade”; a blue-eyed soul tune like “Don’t Get Me Wrong”; or folk-pop and pop-rock tracks like “Maybe” and “Hollywood.” 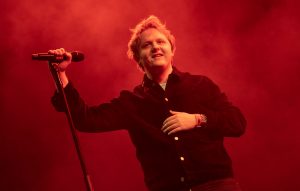 Lyrically, Capaldi isn’t out here re-inventing the wheel, but there’s a generosity and vulnerability to his songs — an ability to capture a break-up without taking sides, to get introspective in ways that are frank but not self-flagellating — that sets him apart in pop’s perennial challenge to pinpoint the right words to convey what it’s like to be young, dumb and in and out of love.

When it all coalesces — the voice, the words — it can be a remarkable thing. On “Headspace,” the wonderful Divinely Uninspired closer, Capaldi lays it all out in search of love’s cruelest comfort, the little lie: “If you got time enough for me/Sing me a song and send me to sleep/Slip into my headspace while I dream/Spin me a yarn, wrap it up around me.”

Listening to his songs, you might get an image of Capaldi as a brooding balladeer with a woe as wide as the Scottish moors. But Capaldi’s public persona is way less sad-sack than relatable goofball king. His social media pages are filled with self-deprecating jokes (“I’M MY OWN FAVOURITE ONE HIT WONDER,” he tweeted last fall), gleeful quips about bowel movements, and selfies taken at pointedly unflattering angles. He plastered one such photo on a big ad in a London subway stop to promote Divinely Uninspired, complete with a quote of dubious praise credited to himself: “The Scottish Beyoncé on a London Underground billboard. Finally famous.” Earlier this year, during a red carpet interview, Capaldi elegantly compared his first Grammy nomination to the bloated satisfaction of smashing an entire plate of chicken parmesan.

On the surface, there seems to be a disconnect between the heartache in Capaldi’s music and his sense of humor, which might appear relegated to the wry phrase he chose for his debut album’s title. But Capaldi sees less of a chasm there. “I’m trying to not make myself out to be an angel,” he says. “When you’re accepting that you’re maybe not the best and easiest person to love back, you have to have a sense of humor about it. Otherwise the songs would be way too closed-off. If you’re honestly going to analyze your own shortcomings as someone in a relationship, you have to have a laugh at yourself.”

Capaldi spent his first few weeks in lockdown doing a whole lot of nothing. Writing songs felt trivial and futile in the middle of the pandemic, a sensation surely heightened by the fact that both of his parents were leaving the house each morning with masks on, since both are deemed essential workers: his father works in food distribution and his mother is a nurse.

“Obviously you worry for them going out, but it’s just that thing of like, you have to,” Capaldi says. “My mum has to do it, and that’s her view of it: ‘This is my job and this is what I do.’ I think if she was more panicked, or my dad was, I probably would be a bit more worried, but their demeanor has been quite reassuring to me.” 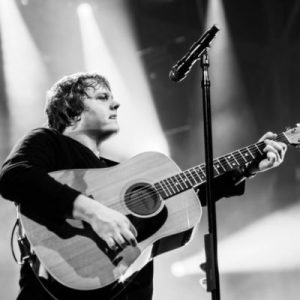 After a few weeks of being unsure of what to do with himself, he started to think about the several years’ worth of snippets and half-ideas he had recorded on his phone, then tried fleshing them out during virtual songwriting sessions with people in Los Angeles or London. He found a fresh comfort in working from home that he hadn’t expected, like the simple act of taking a 10-minute break to just putter around his house when he got stuck on a melody. He’s been listening to Australian rock bands like the DMA’s and Ball Park Music, as well as childhood favorites like Green Day and the Strokes — a quarantine diet that, combined with his desire to inject more pace into his live sets, has led to songs that are much faster than those on Divinely Uninspired. “Like, still really sad, but fast,” Capaldi quips. “Like you’re crying, but you’re running while you do it.”

Most crucially, staying home has given Capaldi the space to reflect on the whirlwind of the past two years and bring those experiences to his music.

“I’ve been writing songs about specific nights that I’ve had on tour and people I’ve met during my travels,” he says. “Don’t get me wrong, a lot of [the new] songs are still about how girls don’t like me — but how maybe an Australian girl doesn’t like me, as opposed to one from Glasgow. I’ve found in my travels that I am equally repulsive to women halfway around the world as I am to them in my hometown, which is a heartwarming thing.”