The Story of Glenmorangie Signet 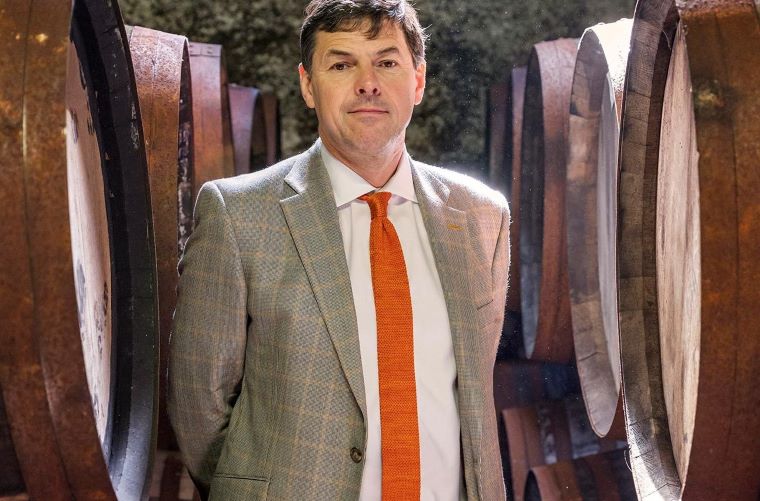 Everyone knows James Bond isn’t usually a whisky drinker. But menswear’s favourite superspy is still the inspiration for Glenmorangie Signet, one of the Scottish distillery’s most unusual products: a dark amber-coloured single malt that’s rich with notes of coffee and chocolate, and is unlike anything else currently coming out of the Highlands. Granted, you won’t find that provenance on the bottle or in any promotional materials.

Just how that came to be is kind of a rambling story, but as we came to learn over a week in Tain, so is pretty much every story. So pour yourself a glass and take note.

This one belongs to Dr. Bill Lumsden, Glenmorangie’s gregarious director of distilling. Dr. Bill, as he’s known, has been working in the malt whisky trade for more than 30 years, and has been with Glenmorangie since 1995 — a dream job for a man who very earnestly counts Glenmorangie Original as one of his all-time favourite drams.

And why shouldn’t he? The brand’s signature product has been produced more or less the same way, in more or less the same place, since 1843. (Before that, the site on the Tarlogie Springs near Tain, Scotland, was a brewery, and had been since roughly 1703.) Glenmorangie Original is nothing if not a crowd-pleaser. Matured in American white oak for 10 years, the final product is light and fragrant, with distinctive notes of citrus and a soft, comforting vanilla creaminess.

The whisky is quiet — totally unlike its distiller. Signet, on the other hand, is an expression much more suited to Dr. Bill. “I’m a passionate person,” he says, which is evident in his dedication to his craft. “And I’m a complete geek. When I get enthused about something, I have to know everything about it.” 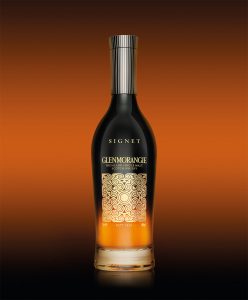 So back to that story. It begins in the 1980s, in Edinburgh, where the good doctor was studying for his PhD in microbial physiology and fermentation science at Heriot-Watt University. In addition to the beer and whisky that informed his studies, Lumsden developed other tastes.

“I was 24 years old; I was a student,” he says. “And young guys are assholes. (Sometimes that doesn’t change with age.) So my friends and I had ideas way above our station. I started imagining myself drinking the finest of wines and the finest of whiskies, even though I couldn’t afford them. So instead, I started to become interested in tea and coffee.”

Lumsden and his drinking buddies took a scientific approach to their caffeination. They tried different beans, different producers, different roasting processes. They sniffed and sipped and studied and researched their way through a whole variety of coffees to try to find the absolute best, much like they were doing at school. And then they did like all young men do at some point: they listened to their inner Bond.

“We eventually settled on Jamaica Blue Mountain as the coffee we were going to drink,” says Lumsden. “I’ll be quite honest: at that stage it wasn’t about the taste. We liked drinking it because that’s what James Bond drinks in the Ian Fleming books.” (At this point, we’ll specifize that Lumsden’s favourite Bond is fellow Scot Sean Connery. But maybe that goes without saying.)

All of this experimentation left Lumsden with a difficult question. “What I ended up with after all my coffee studies was with a degree of dissatisfaction,” he says. “I eventually found that the smell of freshly brewing coffee was unbelievably beguiling, enchanting, inviting. But with all but one or two sublime experiences, I was disappointed with the taste of coffee. I wanted to know why it often didn’t live up to that promise.”

It would take him more than a decade, but Lumsden would eventually find the answer in Scotch whisky. And the result is Glenmorangie Signet.

You can tell it’s Signet week at the Glenmorangie distillery before you ever step foot inside. The cold October air is punctured by the thick smell of something special: notes of chocolate and spice, and the crisp coffee-soaked bitterness of a good Scottish porter, wafting back out over the Dornoch Firth.

This is a once-a-year experience, the results of which will yield barrels entirely unlike the rest of the distillery’s usual output. And while it’s been happening for decades, even the distillers move with trepidation, conducting a delicate experiment with one special ingredient: high-roast “chocolate malt” barley.

“In dark beer like stout and porter, it’s the roasting of the barley that brings out the colour and these different flavours,” says Lumsden. “So I thought, wow, wouldn’t it be fun if instead of drying the malted barley over a traditional fire, it was put into a coffee roaster to see if we could bring out more flavour? That’s where the original idea came from.” In 1995, after a decade of plying his craft, Lumsden eventually landed at Glenmorangie, which was then a relatively small family-run business. As distillery manager, he found himself with freedom to experiment. 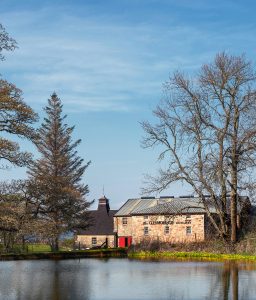 That’s when he first started distilling with high roast chocolate malt — a very different raw material, and the source of these unusual aromas. The barley is first roasted, slowly, at 220 degrees Celsius for about eight to 10 minutes. That product is then distilled — which involves Glenmorangie’s master distillers effectively relearning their jobs on the spot. The chocolate malt reacts very differently to the distilling process, and must be watched closely night and day for the entirety of the week it’s being used. In fact, production on other styles is shut down for these seven days, and only eight of the available 12 stills are in use at any given time — any more than that and the distillers wouldn’t be able to accurately control the results.

Once the chocolate malt is distilled, it turns clear, just like all spirits. The telltale amber colour comes from the aging process — when it’s put into specially made casks of charred virgin American white oak — and from the many other pieces that make up the Signet puzzle. Unlike most luxury single malt whiskies, Signet purposely does not carry an age statement. Instead, it’s a beguiling blend of seven or eight different styles, some 25 or 30 years old, and some no more than 12. These include some aged in charred wood barrels, classic Glenmorangie for creaminess and velvety softness of the palate, sherry casks for a dash of sweetness, and very old whiskies for a degree of maturity and finish. It’s a recipe based on taste rather than exact specifications.

All told, a bottle of Signet represents more than 25 years of experimentation, calculated risk, and good fortune. It also represents one of the most unique expressions in the entire Scotch whisky canon. The colour is dark amber, the texture almost like syrup. And then there are those aromas: sweet hits of chocolate and strong coffee finished with lemon, orange, and butterscotch.

“I love the juxtaposition of things,” says Lumsden. “That’s the way I live my life.” In that way, Signet might be his most personal whisky — the ultimate expression of a lifetime of passion, dedication, and an almost relentless, unbridled sense of curiosity.

And just like James Bond has his own ritualistic way of preparing a martini, so too do Signet’s makers have their own preferred ways of drinking it. “After dinner, when I enjoy a glass of Signet, you’ll see me not releasing my serpent, happily,” says Lumsden, referring to the tradition of opening up a dram of whisky with a splash of water so the aromas waft up and out of the glass like a snake. “Instead, I’ll enjoy it with a giant ice cube. This has the opposite effect. It doesn’t release those aromatic top notes, but it accentuates those mocha, coffee, chocolate base notes.”

However you end up enjoying it, just know it has a pretty good story. Ian Fleming would be proud.