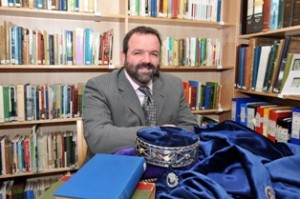 One might expect the poet laureate of Scotland to be a Scot. It has been that way since the Royal National Mod, Scotland’s annual Gaelic cultural festival, began in 1891, but the ceremonial robe and crown are now worn by Nova Scotia poet Lewis MacKinnon.

MacKinnon is better known as the executive director of Gaelic Affairs for the Province of Nova Scotia on Canada’s east coast, though some still know him as the young fellow from Antigonish County’s Dunmore Road who speaks the Gaelic and sings it, too.

When he was crowned last fall in the Western Isles he was introduced as the festival’s first-ever transatlantic bard. He is not exactly a stranger to Scotland, but it is more than two centuries since his people left Moidart and the Isle of Muck.

“I guess the people involved with The Mod found something in my Gaelic poems that spoke to them,” says MacKinnon. “Nova Scotia is the last living Gaelic community outside Scotland. It is the same language, just more than 200 years removed.”

In 2008, MacKinnon published a volume of poetry entitled Famhair: dain ghaidhlig eile or in English, Giant and Other Gaelic Poems. It is a collection of almost 100 poems printed on facing pages in Gaelic and English. The title piece portrays the Gaelic language as a sleeping but restless giant, stretched out beneath the province.

“The Gaelic language went to sleep in this province, it went to sleep in times past, living under the earth, like a great giant, stretched out,” MacKinnon wrote, suggesting the language, while infrequently spoken, remained intrinsic.

“This giant went to bed when our province was young, but now wishes to rise up, to prove that he isn’t so frightful, that he is of use, for those who now tread upon him.”

MacKinnon’s father, Joe, acquired Gaelic as a child growing up in the town ofInvernessonNova Scotia’s Cape Breton Island, but MacKinnon learned his Gaelic first from a great-uncle who spent the last 15 years of his life with the MacKinnons. Well beyond teaching the mechanics of the language, Dougald MacDougall managed to instill a great passion for the Gaelic.

“He loved his language and one day I asked him to teach it to me. We started with simple, everyday phrases like “close the door” and “open the window.” It was something special between my father and my great-uncle. It appealed to me, so little by little, I learned. By the time Dougald was dying we could carry on a pretty good conversation.”

MacKinnon studied Gaelic at St.FrancisXavierUniversity in Antigonish, NS. Founded in the mid-1800s by the descendents of Scottish immigrants, it has a small but vibrant Celtic studies department.

As poet laureate, MacKinnon recently made his first official address to The Mod in Dunoon.  His appointment is for a three-year term during which he will perpetuate stories of the Gaels,  providing occasional links to the mythical figures of history but more often offering comment on current times.

“It is a tremendous honor and I don’t feel worthy of it but I am committed to doing my very best,” he says.