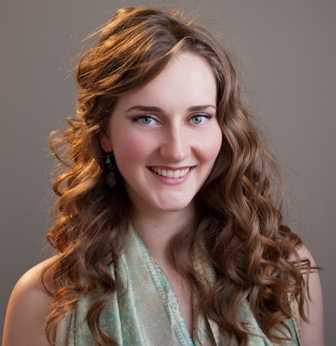 By her own admission, fiddler-singer-songwriter Lizzy Hoyt is “a true Canadian mash-up.”

“Because of that heritage,” she continues, “my connection to Celtic music is very strong. It actually makes me feel like my bones are vibrating.”

Those bones have been rattling for as long as Hoyt can remember.

“Music has been my life,” she explains. “And if life is a journey, then so is my music. In truth, they are one and the same. They are not separate.”

That journey began at a young age; with two musicians for parents, Hoyt was surrounded by melody throughout her childhood, and began studying the violin when she was just four years-old.

“I started to pursue fiddling more seriously in my teens,” shares the songstress. “It was around this time that I also picked up the guitar and mandolin, and started to write songs.”

By the age of 15, Hoyt had snagged her first professional gig as a fiddler for Canadian country singer Eli Barsi. Over the next few years, Hoyt continued to work with Barsi as a fiddler, mandolin player, and backup vocalist. She also collaborated with a number of other artists, including Maria Dunn, Tracy Millar, and Samantha King.

Her dedication to music didn’t stop her from pursuing a formal education, however, and in 2009 she graduated from the University of Alberta with a BA in Sociology.

As a testament to her first love, the twenty-something troubadour already has four albums to her name – the most recent being 2014’s New Lady on the Prairie.

Amazingly, she has accomplished it all without a record label.

“I am a self-managed, self-booked, independent artist. So, really, there are two challenges at play here; one is taking care of the business side of my career, and the other is writing, rehearsing, recording and touring.”

Thankfully, the rewards outweigh the challenges.

“I get great pleasure from knowing that I am giving something ‘good’ to this world; I hope to bring joy to others through music, perhaps touch them in some small way and help them to connect to something.”

It’s not just fans that have connected to Hoyt’s music.

In 2012, she beat out 11,000 other applicants to win “Best Female Artist” honours at the 8th International Acoustic Music Awards. She has also been a Canadian Folk Music Award Nominee for “Traditional Singer of the Year,” and was named a finalist in both the John Lennon Songwriting Contest and the USA Songwriting Competition. Perhaps most poignantly, in 2013 she was awarded the Queen’s Diamond Jubilee Medal by the Governor General of Canada for her outstanding contribution to commemorating Canadian veterans and history for her song Vimy Ridge.

Critical acclaim aside, Hoyt is content to continue challenging herself as an artist.

“As time has passed, I feel my fiddling is stronger and more nuanced. My guitar playing is more rhythmic and detailed. My voice is getting stronger and warmer.”

She acknowledges the strong Celtic presence in her music.

“My instrumental skills are largely based in traditional Irish, Scottish and Canadian music. That said, I listen to many types of music, so there are influences from other genres as well. I strongly identify with the story-telling component of folk music, and they are some of my favourite songs to write, sing and hear. And folk music often contains the core ingredients of a good song; an honest message, and a solid sense of craftsmanship in both the words and the music.”

Things show no sign of slowing down for the singer-songwriter; this summer, she was in Italy to sing in a baroque opera. Then, she returned home to play festivals in Ontario and Alberta. And this fall, she will be back on the road, touring across Western Canada. A major tour is also planned for the spring of 2016.

“I am very thankful I have had the opportunity to visit so many parts of Canada and the world,” smiles Hoyt. “It really has been an amazing journey so far.”