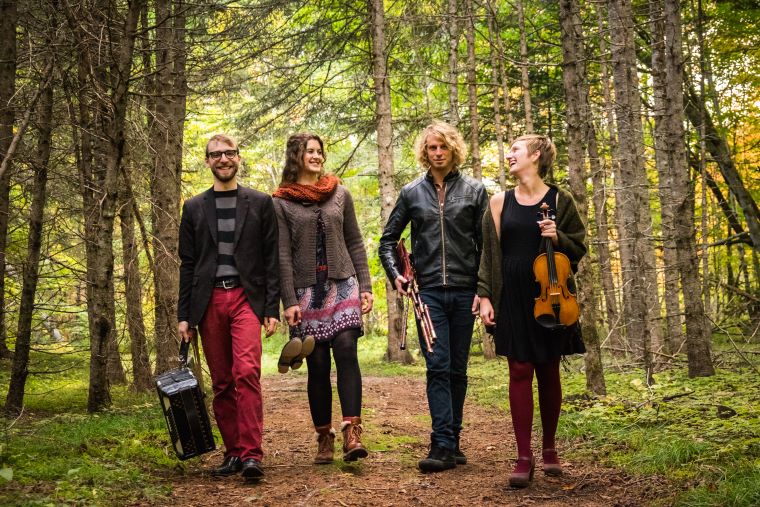 The band’s four members may be spread out across North America – Katie McNally in Boston, Massachusetts, Neil Pearlman in Portland, Maine, Elias Alexander in Ashland, Oregon, and Edinburgh native Màiri Britton, who currently resides in Antigonish, Nova Scotia – but when they get together it is musical magic.

Nowhere is this more evident than on the quartet’s recently released, self-titled, debut album.

The nine-song CD was recorded in Cape Breton, Nova Scotia, and is receiving strong radio play on both sides of the Atlantic. The band will soon be on the road in support of the album, touring Atlantic Canada in March, before taking off to Scotland and Ireland in May.

As Britton explains, Fàrsan’s hybrid sound is intricately tied to the Gaelic language. 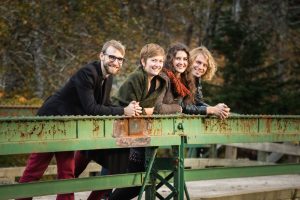 “There are songs – especially puirt-à-beul – on every track. And yet, it is not primarily a vocal CD. We are trying to treat the voice as another instrument in the sets, reaffirming the place of the language within the music.”

Britton has been teaching Gaelic at St. Francis Xavier University and to community groups in Nova Scotia since 2016.

“I only planned to be here for a year, but I love the place so much that I stayed. I feel honoured to be contributing to the collective effort to revitalize and grow the Gaelic culture here.”

Fàrsan’s core mandate, she notes, is to get people dancing and thinking positively about the Gaelic culture.

“We are a traditional band, but we are open to other influences as well. Neil’s background in jazz piano brings a unique edge and excitement to many of the arrangements. Elias is a very creative player, quickly becoming renowned for his innovative piping. When combined with Katie’s rock solid, driving fiddle style, they produce some thrilling variations.”

When the band is performing live, Britton and Pearlman – both accomplished dancers – are frequently “steppin’ her off” together.

“Essentially, we are all drawing on our love of Scottish and Cape Breton music, offering up our own interpretation of that with the Gaelic language firmly at the centre of the mix.”

“Obtaining visas – especially for the U.S. – can be arduous and very expensive. Everyone is juggling multiple jobs, bands and projects, so coordinating four extremely busy schedules can be a challenge. Luckily, technology makes things easier with Skype meetings, Trello boards and other apps that help us keep track of band funds, musical material and calendars.”

For Britton, the best songs are those that she connects with personally.

“I was really drawn to record a song by Rod C. MacNeil (Ruairidh MacIain Sheumais Dhòmhnaill of Barra Glen) as not only did it contain beautiful emotional expression but I could visit Rod in Cape Breton, sing the song with him, and hear about his experiences in the Second World War which influenced his song-making.”

Other album selections, such as Taladh a’ Phuilein, were chosen for their poetic imagery and appealing melody – both of which Britton picked-up from a singer in Ness where the song originates. 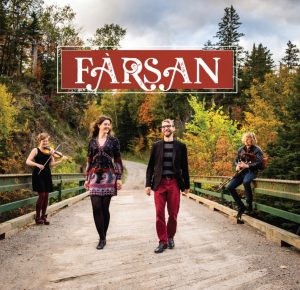 She admits that picking a favourite track is hard, but remembers Drunk at Christmas being the most fun to record.

“It is a set of three puirt-à-beul; starting with a strathspey about how drunk everyone got, and ending with a reel describing a mad house party that somehow migrated into the chicken coop.”

She adds that puirt-à-beul – or mouth music – is all about rhythm and humour.

“We are listening for groove, syncopation and unexpected melodic tunes we can play with. Often the rhythm of the words in puirt-à-beul will directly influence our arrangement and you can hear this particularly in Neil’s piano accompaniment on Drunk at Christmas.”

“My mum is a lovely singer and used to sing folk songs with me and my sister at home when we were growing up.”

Her interest in Gaelic music and culture was nurtured by the Feis movement, a Gaelic youth arts organization she was involved with from the age of five.

“It was there I started picking up the language and also learned step dance, clàrsach (the Scottish harp) and Gaelic song. I was very drawn to the language as a child- I think the sounds and rhythms just really appealed to me and that love and fascination kept growing through my teenage years. I just instinctively felt the Gaelic music and language was an important part of Scotland and, therefore, a part of me too.”