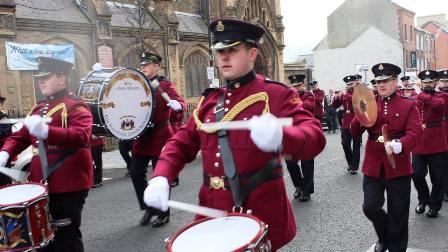 As dusk settles, Derry’s imposing, historic walls cast a shadow across the waste ground where groups of youths stand guard over dozens of wooden pallets, stacked high for their Twelfth of July bonfire. Red, white and blue painted curb-stones proclaim boldly, as does stark white graffiti on a black wall, that the Fountain is loyalist territory – the last Protestant enclave on Derry’s nationalist west bank.

A nineteenth century Irish melody, Star of the County Down, drifts incongruously through the open doors of the primary school. It’s the twice-weekly practice night for the William King Melody Flute Band – the pride of this small, close-knit community.

The musicians don’t fit the stereotype of Northern Ireland’s 600 Protestant marching bands. Except for the side-drummers, they are seated. And their denim jeans, running shoes, baseball caps, and two Manchester United soccer shirts belie the fact that these thirty ‘ordinary’ looking men are Ireland’s seven-time Melody Flute Band champions.

Conductor Derek Moore introduces my untrained ear to the sound of the piccolo, distinctive above flutes, side-drums and cymbals. The instrument is in the large but nimble fingers of a bald, middle-aged man in a black hoodie, who’s scanning the music sheets on the silver stand before him.

“That’s Ali,” Moore whispers, “one of the best piccolo-players in the country. That piccolo’s 120 years old. It belonged originally to the Owen Roe O’Neill flute band – one of Derry’s old, Catholic, republican bands.”

Moore, a bandsman for 45 years, implicitly acknowledges the common musical tradition that underlies a ground-breaking engagement between Protestant marching bands – the most public manifestation of unionist culture – and the nationalist, Irish music tradition.

Relationships are flourishing, as members of the Londonderry Bands Forum and the Irish cultural organization, An Gaeláras, bring musicians together to talk and perform as never before.

Throughout the nineties, when Protestant marches commemorating the Siege of Derry signaled ferocious rioting in the city, this peace-building initiative would have been inconceivable. But a unique agreement hammered out with nationalists, and the recently-brokered Maiden City Accord, mean that – unlike in Belfast – the Apprentice Boys and the Orange Order parade through Derry/Londonderry without controversy.

As coordinator of the Forum — comprising fifteen bands — Moore wants to dispel “preconceptions and misconceptions” about marching bandsmen. “For too long, we’ve been misrepresented and misunderstood. Catholics going to school with bodhráns and fiddles are classed as musicians. Young Protestants, playing flutes and drums, are classed as thugs”.

“Our bands want to be recognized as musicians,” he continues. “We play a huge repertoire of classical, military, American and Scottish music. We play mainstream traditional Irish tunes too – but to a slowed down marching beat. Most of what we play is steeped in all our pasts. It’s doesn’t belong to any one side.”

Former side-drummer, Kenny McFarland, is chairman of the Forum and helped establish the Pride of the Orange and Blue, a ‘blood and thunder’ flute band. For him, involvement with the nationalist tradition reconnects Protestants with a part of their culture from which the majority has been excluded, or excluded themselves.

Standing beneath a blue and white Scottish flag, fluttering from a lamp-post in the Tyrone village where he works, the Forum chairman admits, “We haven’t bothered to tell the story of our culture. People don’t understand it. As soon as we’re born, we reach for the drumsticks. I was a drummer, as were my father and grandfathers. I’ve just left my baby grandson, banging two saucepan-lids like cymbals.

“For 40 years, it didn’t bother me what people thought of us. I knew that nationalists saw us as bigoted, two-headed monsters. But the band was my life – practicing, parading, fund-raising – and I was proud to be involved.”

McFarland led his first pipe band when he was eight, shortly before the Troubles started and his family fled Derry’s nationalist ‘city side’.

“My father was an Orangeman and told me stories about ‘ceilidhing’and following great fiddlers around Protestant town-lands like these. That connection with the traditional tunes has disappeared.”

“I remember thinking this is mental, it’s crazy,” McFarland shares. “People who’ve spent years making sure we couldn’t march are urging us to take part. But the idea kept niggling at me. The notion of a huge festival coming to our city and our culture not being represented bothered me.

“Discussions about music gradually led to a sort of trust being established and we realized the invitation to participate was genuine. We knew how good we were, so – why not?”

The Fleadh attracted a reported 430,000 traditional music enthusiasts to Derry, over eight days. One drizzly evening, the Churchill Flute Band, resplendent in scarlet and white military-style uniforms, performed before an enthusiastic audience in a city centre car park. Three other Protestant bands played at ‘gig rigs’ across the River Foyle.

After ‘the William Kings’ marched with the nationalist St Joseph’s Brass Band in the Walled City Tattoo, they presented them with a plaque inscribed ‘Divided by history, united by music’. And when the Fleadh went to Sligo last year, the Pride of the Orange and Blue paraded confidently through the west of Ireland town, before joining a ceilidh band on stage. ‘Fluters’ and drummers played alongside fiddlers and pipers, aside a huge banner declaring, ‘Connecting People through Culture’.

While researching his book, With Fife and Drum, Hastings realized that ‘Orange’ and ‘Irish’ music shared a common background. “Two hundred years ago – before Ireland was partitioned – everybody, apart from the very wealthy, enjoyed the same popular music, whatever their religion. In cultural terms, Irish, Scottish, traditional, orange and green don’t really exist independently of each other.”

He explains, for example, that marching band favourite Shanghai Lil is a slowed down version of a traditional reel The Swallow’s Tail. The Boyne Water exists in the Irish tradition as Rosc Catha Na Dunham or The Battlecry of Munster.

“Orange music, whatever it is, happens here. It’s been adopted, adapted and developed and it’s not done the same way anywhere else. It’s as Irish – and traditional – as anything on this island.”

While that assertion challenges purists on both sides, the response to the flute bands’ engagement with nationalists is overwhelmingly positive. An education program about tolerance, acceptance and the bands tradition is being delivered to 600 15-year-olds. Plans are underway for joint tuition and for using music to gain educational qualifications.

Workshops have already taken place in An Cultúrlann, Derry’s £4.5 million Irish cultural centre. The eye-catching building has won major awards for its zig-zag, pinball-like design, with one judge commending its “arms open wide to the whole community.”Appropriately, Protestant bandsmen have played there for nationalist audiences and performed a drama about the bands tradition, The Pride, to a packed house.

In the ground-floor cafe, Gearóid Ó hEára from An Gaeláras switches momentarily into Irish to order a chicken wrap and describes what’s happening as “seismic”.

“We’re all on a learning journey, using music as a common denominator,” says the life-long republican and former Sinn Féin mayor. “If we meet together as musicians, we can break down the history and hostility between us.

“The hallmark of this engagement is brutal honesty. Nationalists form their opinion of flute bands from years of negative, sectarian images on the six o’clock news.

“This process is about, ‘You can be a loyalist, a bands-person, a Presbyterian, whatever. Be who you want to be and I’ll meet you where you are. You’ll meet me as who I am. But let’s have a conversation, a dialogue.’”

When Derry hosted Ireland’s Pan Celtic Festival last Easter, a unionist band joined a Parade of Nations to Waterloo Place —the spot where violent clashes after an Apprentice Boys’ parade triggered the start of ‘the Troubles’ in 1969 .

“After playing there with a nationalist band,” Ó hEára says, “one of the bands-people reminded me poignantly that it was the first time in 46 years they’d been allowed to march there. It shows what’s possible when people work and talk together.”

The encouraging reaction to the Forum’s outreach work has given them “the confidence to move forward,” Moore explains, “and say, ‘this is who we are. This is what we do.’”

The emboldened Forum accepted an invitation to address the annual conference of Irish Republican party, Sinn Féin, in March. “It was our biggest opportunity to put our message across and face down our biggest detractors.

“One of our band members was shot dead by the IRA in 1975 – ten bullets in his back, a few streets from here. There were people in that conference who were probably involved.”

“But if we keep looking back, not looking forward, we’ll go nowhere. One of the things we’re trying to instill into young ones – and it’s controversial – is that the past is now past. We have to go forward.”

The William King band has transformed itself from the body set up 40 years ago to distract young unionists and loyalists from the violence engulfing the city. The swaggering teenagers – wearing bow ties and home-knit jumpers, with crimson berets sporting orange plumes – have evolved into disciplined, accomplished musicians. They perform now in smart crimson uniforms with white peaked caps, and march with military precision, playing expensive musical instruments.

Graffiti on the wall in the Fountain suggests a community under siege but the Protestant bandsmen’s new found confidence and pride suggest otherwise.  “We’re still two communities, but music can unite us in a personal way,” McFarland notes. “For us, it’s about getting rid of the idea that we’re insulated, on our own, ‘just flute bands’. We’re musicians, showing we can hold our heads high and play with anybody. All of a sudden, we’re not the enemy.”