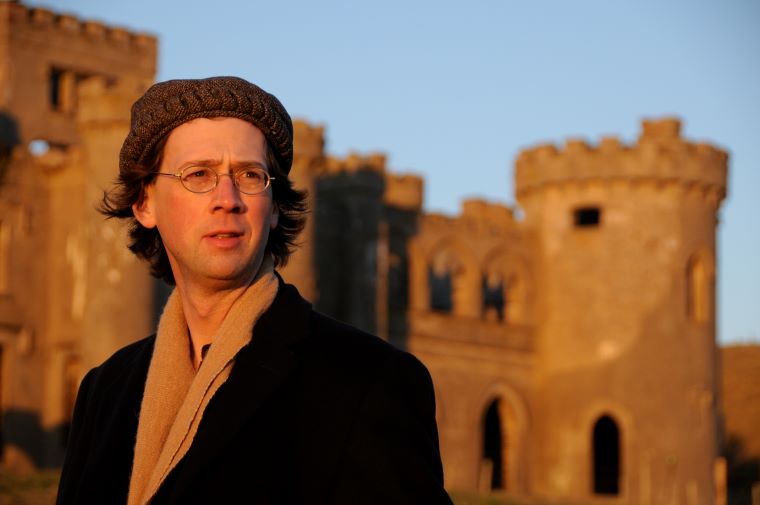 Manchán Magan is a writer and documentary-maker. He has written books on his travels in Africa, India and South America and two novels. He writes for The Irish Times, reports on travel for various radio programs, and has presented dozens of documentaries on issues of world culture. Recently we spoke with him about his passion, his profession, and his latest book Thirty-Two Words for Field.

What are your roots?
I was born and reared in the heart of Dublin but spent a quarter of each year in the West Kerry Gaeltacht (Irish-speaking area) of Corca Dhuibhne. My great-great-great-great-granduncle was Aodhagán Ó Rathaille, the last great poet of the ancient bardic schools, who was entitled to wear the sacred cloak of crimson bird feathers, and whose potent satires could raise a fearb (weal/welt) on the face of its target. My great granduncle, The O’Rahilly, was involved with the foundation of the Gaelic League and the revival of the Irish language in the 1910s. He was the only officer to die in combat during the 1916 Rising. His tabharthas (an offering or sacrifice that is regarded as a sacred gift from the gods) had a tangible impact on my Irish as it was my grandmother who taught me Irish, and she was inspired by seeing her uncle, The O’Rahilly, head out to near certain death on Easter Monday of 1916 during the Easter Rising. As a leader, on what he considered a futile mission, he knew he could not return from the battlefield alive, and so kissed his pregnant wife and 4 children farewell. For my grandmother this was the most pivotal moment of her life and she taught Irish to us grandchildren in honour and memory of him.

Where do you currently reside?
I live on 10 acres in the midlands of Ireland near Lough Lene in Co. Westmeath. I have planted 6 acres of oakwood, with a veg garden, an orchard, beehives, and hens. 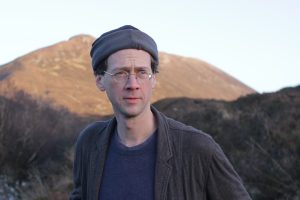 When and why did you start writing?
I had travelled throughout Africa, India and South America for eight years from the age of 19, and when I finally returned to Ireland I settled down on my 10 acres, built a house of bales of straw that I had learnt how to build from folks in the Kootenay Mountains near Nelson, British Columbia. I wanted to capture the experiences I had had with minority cultures all over the world and I taught myself how to write over many arduous years so that I could convey these stories. I have 3 travel books in English, and two in Irish, as well as a novel in English and one in Irish.

Are they the same reasons you do it today?
My writing has switched from conveying the richness and complexity and beauty of faraway cultures to doing the same for my own indigenous culture. I write Irish Times articles and television and radio documentaries that elucidate and celebrate the rich culture of Ireland in terms of landscape, language, heritage, history, culture, and art. I write and perform plays and performance installations that are about the Irish language, but that are in English.

How have you grown as a writer over that time?
In the three arduous years that I kept writing and writing my first travel books, honing my craft, I literally sweat blood and tears. It was a challenging time. I was determined to master the art of communicating through words, until finally I found a publisher in Brandon Books and a great agent. The benefit of writing feature articles so regularly for the Irish Times is that I get to practice and improve my craft daily. I want to constantly become clearer and more elegant as a writer. To find ways to convey subtle, complex ideas in simple, engaging prose.

What is the most challenging aspect of the vocation?
Writing is my absolute passion. The only challenge would be not being able to write. The power of the initial urge to learn how to write well enough to be recognized and financially supported through it was so overwhelming. I know I wanted to communicate to people through words. I recognized that there was so much in my heart and soul and mind that I wished to share, and I am thrilled at the opportunity to be able to do this each day. Of course, writing a book is a lot more challenging that putting together a single article. My new book (Thirty-Two Words for Field) took me six years and it was so lovely to be able to switch to writing articles or my theatre pieces/plays when I lacked that intense concentration required for a book – particularly a book in which I wished every complex idea to be conveyed in super short chapters.

What are the rewards?
To be able to convey one’s heart’s thoughts is a profound honour.

What have been some career highlights?
I performed my theatrical installation Gaeilge Tamagotchi at the Kennedy Centre for the Performing Arts in Washington DC in 2016. In the piece I bestow endangered Irish words on members of the public who agree to foster them and cherish them. I was asked to write a piece in honour of the great writer, Tim Robinson and to perform it for him in the Druid Theatre in Galway, which was such a thrill as he was one of my true literary heroes., and a central inspiration for my current book. 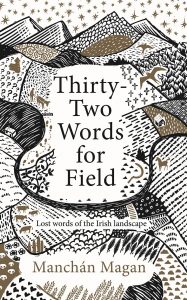 What inspired you to write Thirty-Two Words for Field?
I believed there was so much to be said about the Irish language that is never said.  The landscape and culture of Ireland has been explored in many wonderful works of literature that present the wildlife, literature, history, and heritage of this wet, windy and rocky Atlantic island. Yet one facet has been ignored, and that is the Irish language. No book has yet attempted to present the sublime beauty and profound oddness of this ancient tongue that has been spoken on the island for perhaps 2,500 to 3,000 years. I wanted to address this.

How much research was involved?
The task I set myself was to trace the insights that the Irish language offers into the Irish psyche, its lore and landscape, flora & fauna, and the many layers and dimensions of reality that run parallel to the physical world. To do this required digging out old words and semi-forgotten terms, expressions and concepts that offer new ways of being in the world, of seeing nature & experiencing reality. I spent months rifling through old dictionaries and Gaelic texts, mostly online, trying to trace strands of psychological, spiritual, medicinal, and agricultural knowledge that still exist in old words & phrases. For example, my book lists 14 different words for salmon. 32 words for fields. 45 words for stones, 70,000 placenames. 4,300 words to describe people’s character. The amount of them is irrelevant, what I was searching for were words that allow us to see our world in a richer or more engaging way.

What did you learn during the process?
That Old Languages offer a wider, more inter-connected and sustainable take on the world and that they all have many inter-related aspects that suggest a complex, but harmonious cultural ecosystem from which we all descend. I was particularly struck by how the Irish language is alive with references to other dimensions and spirit beings. Púicín means a supernatural covering that allows otherworldly beings appear unseen in this reality – it can also mean a blindfold, a goat muzzle or a tin shade put over a thieving cow’s eyes. Such concepts challenge the parameters of the rational mind, yet they synch well with the latest revelations in quantum physics, where electrons are forever materializing, then dematerializing and reappearing somewhere else. Words like alltar (netherworld, other place), which is the opposite to ceantar (district, locality) and crithir (the vulnerability and insubstantiality of solid objects) help us come to terms with this. What became clear to me was that words can be wedges that pull back the surface layer of thought and feeling, revealing a deeper truth beneath, like diadhánach, the lonesomeness of a cow bereft of her calf. Words like these can have unusual resonance patterns when sung inside tombs like Loughcrew. Their resonant frequency can change brain patterns and even one’s physical surroundings.

Why is it an important work?
Old languages are more in danger than ever, and I hope that the book might highlight the richness that is still is stored within these languages – particularly Irish, By rooting us back into the soil and to what matters most in life, it allows us feel more grounded and at home in this increasingly chaotic world. Also, the insight into how the Irish mind was always open to the Otherworld and could drift so easily beyond the limitations of physical reality is really valuable to those of us seeking greater meaning. I hope that the book reveals the underlying connections between all things, from waves to hawks to fields and flowers, and that it makes clear how ancestral languages can steer us back to what truly matters – allowing readers make sense of an increasingly chaotic world by reintroducing us to the mysterious glories of the natural world and the subterranean existence to all things. 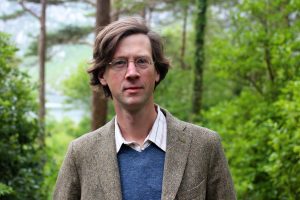 What makes a good book?
In this day and age a book should help people. All of us are craving more meaning in our lives, or more connection, or less alienation. Everything is so chaotic and tumultuous. The rate of change in the last generation has been dizzying. I believe a book should offer solace in whatever way it thinks is best.

Is your creative process more ‘inspirational’ or ‘perspirational’?
I do a lot of research on which I can then base my ideas and even flights of fancy.

How and when did you get involved with filmmaking, theatre, and radio/television?
My passion in life is to convey ideas – mostly surrounding how humanity is more connected to a common global unity than mainstream media like us to believe. We are all rooted in the same past. And that past contained valuable knowledge in terms of engaging with nature, living healthily, and nourishing ourselves and the environment we live in. I believe humans are growing freer and more informed with each decade – we just need some guidance. And I have been stirred to write and perform plays, present television documentaries, write newspaper feature articles and produce and present radio programs all to share and explain ideas that I feel are nourishing and true.

What’s next on your agenda?
I am currently doing a project called Sea Tamagotchi, where I am collecting endangered coastal words and maritime terms from along the coast of Donegal, Mayo, Sligo, and Galway. It requires meeting up with old fishermen and folklorists and gathering their knowledge. In February and March 2021, the first ever IMAX movie about Ireland will be released by MacGillivray Freeman. I present the film. It is about a journey I made around the entire island of Ireland with four young people, showing them the rich culture and ancient heritage of Ireland and how it was expressing itself in today’s modern Ireland.