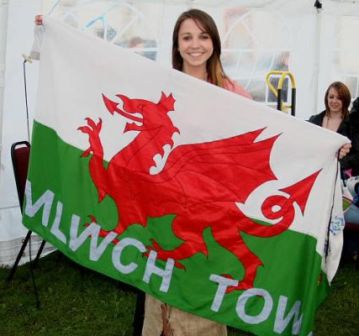 What are your own roots?
Welsh, born and bred. I was brought up in Ynys Môn (Anglesey) – the island at the top of Wales, the youngest of three children. I have two older brothers, and although our upbringing was a rural one it was far from insular. I feel lucky to have had parents who encouraged me to appreciate my roots and heritage but to also look out to the rest of the world.

When and why did you start playing music?
To be completely honest, I can’t remember when and why I started playing music. Like a lot of schoolchildren in Wales, I had the chance to learn an instrument when I was about 8 years old. I chose the violin, and had a wonderful teacher but absolutely no talent! I stopped after Grade 5, and have only looked at the poor stringed beauty twice since then. But I was singing way before I ever set eyes on a violin. It’s a compulsion. I used to make up songs about everyday things as a very small child – what I was going to have for lunch, where I was going the next day, much to the annoyance of everyone around me! At some point, writing and composing became the way in which I expressed my thoughts and feelings about things a little deeper than lunch… My first real songs were written on backs of envelopes and composed on the piano, and were never meant to be performed. They were just songs. I started to learn guitar as a young teenager, loved it, and still do.

Are they the same reasons you still do it today?
Yes. My songs are still just songs, but today they’re also meant to be performed. My starting point is always that same compulsion – in Welsh, it’s called ‘Yr Awen’, and can’t really be explained. The urge comes to write, sometimes about a very focused incident or feeling, politics or love, but sometimes it’s yr Awen itself that exposed your feelings and not the other way around. Sounds a bit airy-fairy I know, but it isn’t really – It’s waking up in the middle of the night looking for a pen and a piece of something to write on, just because it’s what you have to do. As for performing, I never thought anything of it really until I had a few months without it a while back. I love performing, it’s when I am most comfortable in my own skin and feel most alive. But I have to believe in what I’m singing. Otherwise it’s no good.

What are the challenges of the vocation?
The most challenging part of following a career as a singer/songwriter in Wales these days is actually making a living from it. Wales is a small country, so you have to be careful you don’t over-promote, or people get sick of you being everywhere, on everything! But you could promote flat out and still not earn a decent living singing in Wales at the moment. The royalties that Welsh language songwriters receive from radio airplay has been slashed by 90% in recent years, so ensuring that no-one who performs solely in Welsh (as our bards and story tellers have done throughout the centuries) can do so professionally, full time. It really is a worry for me. Will recording in Welsh become a hobby, and releasing music professionally only available to rich kids? Another elite is something we really don’t need.

What are the rewards?
The most rewarding part is performing in front of an audience. Expressing yourself freely. It’s being able to do something I love.

How would you describe your sound today?
I’d describe my sound as ‘mixed’ if I’m perfectly honest. There’s all kinds of things in there – folk, celtic, pop, rock, country, reggae – the sound is formed by the song, the way the lyrics relate to the music. The song is formed by me. So… it turns out to be a bit of a cauldron, just like me!

Where do you typically perform?
I get asked to do all kinds of things, from loud pubs, clubs and festivals to very intimate theatre settings. For many years I performed only in Wales mostly, but recently I’ve been out to Europe quite a lot too. And I’m looking forward to a North American debut in LA on March 1st 2014 – it’s going to be a whole new experience!

What is the response like from audiences?
I love it when an audience sings. There’s nothing quite like it. The response can vary, in some Welsh pubs you’ll get young people going crazy and dancing, but in more intimate settings people listen intently of course. Audiences are usually very kind to me, and very appreciative. Singing in Europe, I’m used to be slightly apprehensive because the audience can’t understand most of the lyrics – but performing in a language foreign to your audience really proves that music is an international language. I’ve always had brilliant response, and am grateful for that.

What makes a good song?
Massive question! Too big to answer! I think we could fill a semester of philosophical seminars trying to answer that one…

Is your creative process more ‘inspirational’ or ‘perspirational’?
It can be both. Inspirational mostly – something I see or do or experience just makes me want to write. But I also like to work under pressure – composing to a deadline isn’t easy, but has sometimes given me some of my best songs.

What’s the music scene like in your part of the world?
Pretty lively really! There’s always live music somewhere, in Welsh or English mostly. Pubs, bars and village halls are probably the grass roots of it, but we also have quite a few larger venues in North Wales where you can see some top Welsh artists and international acts too.

Is enough being done to preserve and promote Celtic culture generally?
I think some aspects of Celtic culture are being promoted well, but it’s important we keep working at it. Magazines like this one and radio stations etc do a good job of spreading the word.

What can we be doing better?
The reality is that most living Celtic languages are in serious trouble. What we could be doing better is simply be a little more proud of our heritage and our languages. After all, when you lose a language – it’s gone forever.