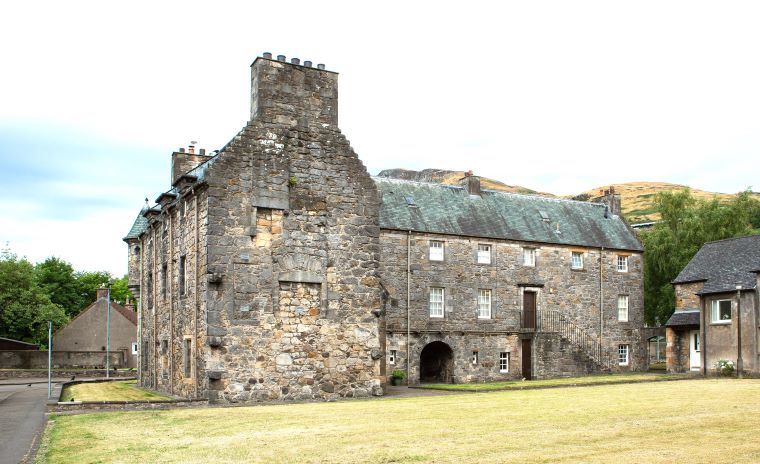 Compared with the great Scottish castles of Edinburgh or Stirling, Menstrie Castle is small and unassuming. Located six miles to the northeast of Stirling Castle, and at the foot of the south-facing scarp of the Ochil Hills, Menstrie Castle is tucked out of sight within a small residential area of its namesake village. Only a small part of the historic building remains and most of this was converted during the 1960s to accommodate modern housing units. It is obvious that stones from previously demolished parts of the castle have been repurposed in the more recent surrounding dwellings. What is less obvious is that some stones from the site were taken to Canada and used in the construction of a small monument in Victoria Park, Halifax, Nova Scotia to commemorate one of the castle’s former owners – William Alexander. Today, just two small rooms in the castle remain to tell the story of the man who founded Nova Scotia.

Menstrie Castle dates to about 1560 when it was built by the Alexander family – a branch of the MacAlister clan who had chosen to anglicize their surname. It was here, around 1577, that William Alexander was born. His father died in 1580 and the care and upbringing of the young boy was entrusted to his uncle James, the burgess of Stirling. Alexander gained his early, classical education at the old Grammar School on Stirling’s Castle Wynd. His tutor was Thomas Buchanan, brother of the esteemed intellectual, George Buchanan, tutor to King James VI of Scotland. It is thought that Alexander went on to attended either the University of St. Andrews or Glasgow University and, according to the Scottish poet William Drummond of Hawthornden, Leiden University in the Netherlands. William Alexander was a well-educated, junior aristocrat.

A few miles east of Menstrie Castle lies Castle Campbell in Dollar, lowland residence of the Campbells of Argyll whose primary residence was Inverary. Alexander was appointed tutor to the 7th Earl of Argyll, Archibald, and accompanied him on a grand tour of Europe. Argyll went on to grant Alexander all the lands of Menstrie and also introduced him to the royal court. A bond developed between Alexander and King James VI. In 1601 Alexander married Janet Erskine, daughter of Sir William Erskine and – in 1603 – when King James VI of Scotland was crowned James I of England, Alexander made the move to London as part of the royal court. There he was made Gentleman of the Privy Chamber and Master of the Household and became companion of, and tutor to, King James’ son, Prince Henry. Sadly, Prince Henry died of typhoid at the age of eighteen and Alexander was then appointed Gentleman Usher to Prince Charles.

Alexander had a penchant for writing, becoming an acknowledged poet of his day and a writer of closet dramas. 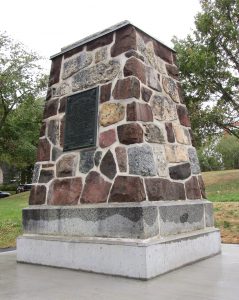 His 1603 work Tragedie of Darius was dedicated to King James who referred to him as ‘my philosophical poet’. Although based in London, he returned regularly to Menstrie and it was here, away from the hustle and bustle of royal court life, that he met and formed a lifelong friendship with acclaimed Scottish poet William Drummond and penned much of his work. He also collaborated with King James on a translation of the Psalms of King David.

Alexander was politically astute, motivated, and imaginative. Along with a cousin he secured permission from the king to be an agent for the collection of taxes owed to the Scottish Crown between 1547 and 1588 retaining 50 percent of the takings as a reward. In 1607 he was granted mineral rights on the land at Menstrie and he founded a silver mine in the nearby Ochil Hills. He was knighted in 1608 and continually strove to see Scotland acquire the recognition and status he felt it deserved, although – in 1619 – he was made Master of Requests, a role that saw him prevent Scots travelling to England unless they were of a certain status. In 1621, following a proposal for colonizing land in North America, the king granted him part of Newfoundland. Nothing came of it as he subsequently acquired a much larger tract of land running south into North America that he would name Nova Scotia. His proposal was to sell hereditary baronetcies for a sum equivalent to £150 and, although he had some initial success, the scheme was set to flounder.

It wasn’t until 1629 that Nova Scotia was settled by the Scots and by then only a handful of baronets had been created. By 1631 only 85 baronetcies had been sold and, in any event, an agreement had been reached to return most of the lands to the French who had long claimed parts of it. Some baronetcies continued to be sold but, in essence, Sir William’s scheme had collapsed leaving him with significant debts. Prior to the venture’s failure he was appointed Secretary of State for Scotland in 1626 and Lord Alexander of Tullibody and Viscount of Stirling in 1630. Perhaps as a gesture of consolation following King James’ death in 1625, the king’s son and heir, King Charles I, appointed him 1st Earl of Stirling and Viscount Canada.

Despite debts accruing from the failing baronetcy scheme Sir William acquired an impressive, Renaissance townhouse on the approach to Stirling Castle in 1629. It is known today as Argyll’s Lodging, after the 9th Earl of Argyll bought the property in the 1660s and the family took up residence there, abandoning Castle Campbell at Dollar. Anticipating a visit from King Charles I, Sir William undertook extensive alterations and redecoration of the property all of which resulted in further debt and, by the time of his death in London in 1640, he was declared insolvent. He left the house to his son Charles but it was seized by the town of Stirling as a consequence of his outstanding debts. Today it is regarded as Scotland’s most complete and outstanding example of a 17th century townhouse. 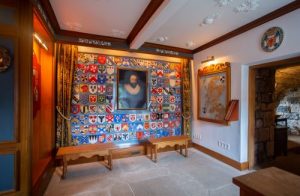 Menstrie Castle was sold, but eventually it was abandoned and fell into a state of disrepair.

In 1957 Scottish actor and presenter Moultrie Kelsall, who lived in nearby Blairlogie and was a supporter of architectural conservation, launched a campaign to save the building. In due course it was sensitively restored with much of it being converted to form living accommodation. The former courtyard was reinstated with new houses flanking the east side, partly constructed with stone from the site. In 1962 it received a Scottish Civic Trust award for architectural conservation. Two small, ground floor rooms were retained for the purpose of creating a mini-interpretation centre in memory of the role William Alexander played in the politics of his day. Those rooms celebrate the connection between Sir William, James VI/I, Menstrie Castle and Nova Scotia. It displays portrait copies of James VI, his successor Charles I and Sir William Alexander. One wall is given over to the painted armorials of the 109 baronetcies of Nova Scotia that were sold in total. The castle and its commemorative rooms may be small but the role it played in history is significant. Today the rooms are maintained by the unofficial Friends of Menstrie Castle. As retired councilor and Friends’ member Les Sharp noted, “We get visitors from all over the world with links to William Alexander or with an interest in the transatlantic connections that he established. The least we can do in our small village is pay homage to one of Scotland’s true statesmen.”

Sir William’s scheme for promoting Scotland in the territories of the Americas has left its mark. Today, there remains a province called Nova Scotia, an official coat of arms granted by King James VI/I and a flag. There are also about 100 baronets of Nova Scotia still in existence and in the village of Menstrie lie the Nova Scotia Gardens over which that province’s flag flies. All of these things were made possible by the man born in Menstrie Castle – William Alexander. ~ Story by Tom Langlands