The Glory of Glenora 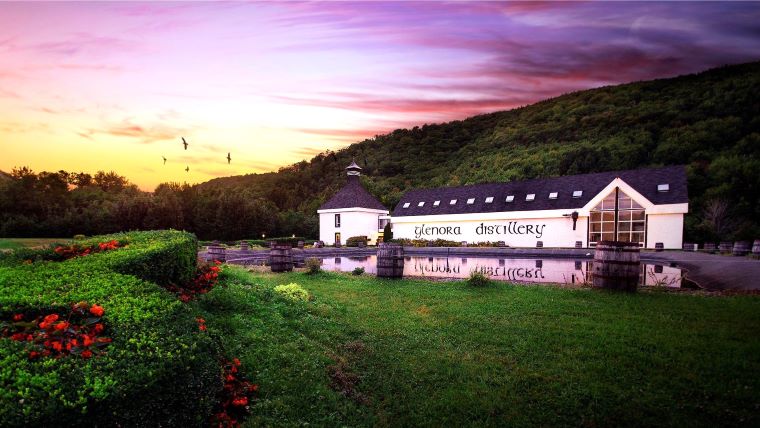 A recent, long-anticipated visit to Nova Scotia allowed me to reduce the items on my bucket list. A road trip to the extreme northeast corner of this Eastern Canadian province had long been among my priorities. I assumed that being “New Scotland,” Nova Scotia would have its share of kilts, bagpipes, and gracious hospitality, and I was not disappointed. I relished visiting the Cape Breton Highlands National Park, the Cabot Trail, the Ceilidh Trail, and what is billed as “North America’s First Single Malt Whisky Distillery,” in Glenville.

Nova Scotia Route 19 – aka The Ceilidh Trail – meanders through scenic beauty and the towns of Dunvegan and Inverness, evocative of routes and towns in Scotland. After hugging the spectacular, craggy seacoast north of the Canso Causeway, the highway turns inland on its way toward Glenville. Soon, the wooded beauty of a gentle glen came into view, then the distinctive pagoda chimney announced our destination, even before the sign, “Welcome to Glenora Distillery.” Our idyllic arrival reminded me of a similar approach to one of my favorite distilleries in Scotland – on the outskirts of Dufftown, on Speyside, the picturesque drive through the rolling Conval Hills leads to Glenfiddich Distillery, whose pagodas are just as striking and offer a similar greeting.

The first order of business was a distillery tour. “We never call it Scotch -it is single malt Canadian whisky,” advised our tour guide. “To be called Scotch, it needs to be distilled and aged in Scotland.” He explained that when the newly distilled liquid goes from the still into the cask it is crystal clear and is called “New Make Spirit” for the first three years of ageing. At Glenora, it then becomes single malt Canadian whisky; in Scotland it becomes single malt Scotch whisky, and at both distilleries the liquid continues to age for many more years. 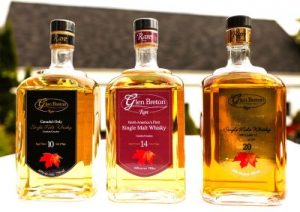 Beginning with the water source, the similarities between Glenora and Glenfiddich intrigued me. Water is one of only three ingredients used to make single malt whisky. Glenora’s water source is the adjacent MacLellan’s Brook. At Glenfiddich, the underground water source is the Robbie Dhu Spring, located on a hillside above the distillery. Barley, another of the three ingredients (the third is yeast) is trucked in from commercial malting companies. Large wooden vats called mash tuns, used at each distillery to mix grist and water together, are made from Douglas fir from the US Pacific Northwest. Ageing warehouses and bottling facilities are located on-site at both distilleries. A Scottish firm on Speyside, home to many of the world’s best known Schoteches, made Glenora’s beautiful copper stills.

On-site, the Glenora Inn, restaurant, and pub proved to be unexpected surprises. The inn features nine comfortably elegant rooms and six self-contained log chalets on a mountainside overlooking the distillery. And there is where I checked off another of my bucket list items – seeing bald eagles soar in the wild.

The restaurant uses local ingredients and prepares them using traditional Nova Scotia recipes. The fine results have won the venue the Best Restaurant on Cape Breton Island Award from the food guide Where to Eat in Canada. As wonderful as all this was, the highlight of my stay was attending a traditional Cape Breton ceilidh. Rousing tunes played on fiddles, guitars and piano rocked the rafters and drew all listeners and dancers into the magic of Glenora and the island.

Leaving Glenora in a light, misty rain reminded me of similar departures from Glenfiddich and other distilleries in Scotland. With my memory recharged by absorption in whisky-making, I will never forget the parting words from our tour guide as we held tight to our rain hats and dodged around streams of water in the parking lot: “Och – it’s a great day for makin’ whisky!”