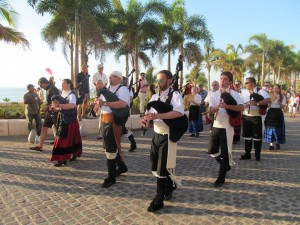 Celtic colours and pageantry are on full display at the inaugural Mexican Celtic Festival in Puerto Vallarta this week. Our correspondent Maria Watson files this report from the sunny beaches down south.

Puerto Vallarta’s Malecon, the boardwalk alongside the Pacific Ocean was the site of an amazing spectacle last Friday.  The music of pipes and drums mixed with the sounds of the surf and the swaying of palm trees as three pipe bands marched in a parade to the delight of a throng of onlookers.

Marching majestically down the cobblestones of historic Puerto Vallarta was the host band of the event, the St. Patrick’s Battalion Pipe band, followed by the Edmonton Transit System Pipe Band from Canada and the Gaita band of Mexico’s Cultural Association of Galicia. Curious tourists and locals packed the seats around the seaside stage where the parade culminated. The First International Celtic Music Festival of Mexico in Puerto Vallarta had officially begun.

The St. Patrick’s Battalion band is named in honour of the brave Irish soldiers who fought in the Mexican army and are hailed as heroes to this day in Mexico. The band’s bass drummer Hugo Hernandez organized the festival to promote the Celtic links of Latin America. Hernandez’s ancestry is from Northern Spain.  Gaitas (Spanish bagpipes) of Galicia and Asturias were represented in the festival as Mexico was the New World destination for many of Europe’s Celtic diaspora.

Following the parade and outdoor concert, participants congregated at Murphy’s Irish Pub.  Mexican fiddler Jorge Espinosa and Canadian fiddle player Chrissy Crowley started a traditional session with some fiddle music. Tunes of Ireland, Scotland and Cape Breton filled the festive air and when Carmen García Meré played the celtic music of Spain with her Asturian gaita, multi-instrumentalist David Daza of Mexico accompanied her with his Spanish bagpipe. The pipers and drummers of the Mexican Galician Association joined in raising the roof with traditional Spanish pipe tunes.  The Great Highland pipers played at Murphy’s and then went on a pub crawl, amusing and entertaining revelers of Puerto Vallarta’s renowned nightlife scene.

The three pipe bands all performed on stage the following evening at the posh Sheraton resort.  The concert started with  Mexico’s talented young band Shamrock. Later the band Alba’s Edge from the United States took to the stage; their music is a fusion of celtic music and latin rhythms.   Another Mexican celtic group called Ogham Ensemble entertained the audience with music of various celtic repertoires.  Chrissy Crowley joined with renowned piper/composer Neil Dickie for a pipe and fiddle performance. Mexico’s Bradigan Irish Dancers performed traditional Irish dance.  The Galician band’s dance group performed in traditional  costumes to the music of Northern Spain and also got the crowd to join them in the traditional Brittany dance, the An Dro.

Following the concert the members of the audience participated in a traditional Scottish Ceilidh dance patiently directed by  Phyllis Gaskell  and José Manuel Gutiérrez. Ceilidh dancing in Mexico is not unknown and events organized by the St. Andrew’s Society of Mexico feature the traditional country dance in their celebrations.

The Edmonton Transit System Pipe Band’s trip will be forever memorable, not only for their performances in a tropical clime but also the fascinating story about their flight to Mexico. Severe turbulence forced an emergency medical landing at a small airport in western Montana as a flight attendant had sustained injuries.  The band played an impromptu performance for the stranded passengers that raised spirits until the airline could send a replacement plane.  Once in Mexico, the band put the scary experience behind them.  The tall Drum Major Chuck Van Deel Piepers, dressed in full regalia cut an impressive presence with curious onlookers, especially the locals who had never seen a man in a kilt.  The stern official face he reserves for leading the band melted to a warm smile anytime the local Mexicans approached him and he was cheerfully obliging to all the photo requests and numerous curious questions.

The inaugural festival coincided with one of the coldest winters experienced in Canada and the United States and visitors were able to not only experience the wealth of the Mexican Celtic culture, but also escape from the frigid northern temperatures.  On the final day of the festival, an event that was very successful thanks to strong organization and a dedicated volunteer corp, the common refrain was “See you next year!” . Organizer Hugo Hernandez announced the 2nd Annual Celtic Festival of Mexico is tentatively set for March 2015.