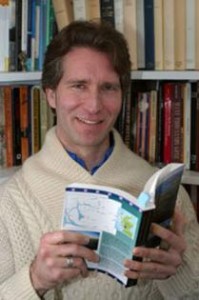 What are your own Celtic roots?
I was raised in the Imperial Valley of south-east California and although my grandparents spoke vaguely of Irish and Scotch-Irish roots, they had withered. In fact, both of my grandparents had been orphaned, so I had little direct connection with any real Celtic culture. I’ve since discovered that there were thousands of Gaels in southern California, and in fact there were so many Maritimers there that they started a newspaper called The Maple Leaf specifically to connect Maritimers in California  (and other parts of the west) to their communities in Canada. I’ve even seen a travel account written in entirely in Gaelic about the Imperial Valley. During my youth people tended to be divided into two camps, the anglophone and Spanish-speaking camp, although at times I felt that I straddled them. I think that that early multicultural and multilingual experience has been useful to me in understanding the complexities of ethnicity and inter-cultural exchange. There are distinct Celtic cultures, and although I’m probably closest in ancestry to Ireland, I’ve become much more involved in Scottish Gaelic culture. My real Celtic roots began when I went to live in Scotland in 1992 and immersed myself in the language and culture, completing a Ph.D. in Celtic Studies in 1998, amd continuing my connections there to the present.

Why are those roots important to you?
Scottish Gaelic has provided me with very interesting and important perspectives that I would lack otherwise. I’ve grown a new set of roots, and adopted a new family and heritage. This is complicated — being split in different directions by differing allegiances — but it is pretty typical of the post-modern world, where people have the freedom to consciously choose their identity and ethnic commitments. In fact, it is exactly because the Celts are not a racial group but are defined by language and culture that Celtic languages and cultures have dwindled: economic, social and political forces made it difficult for people to maintain their heritage, and people chose instead to ally themselves with English (or sometimes French) culture. But I hope that things are changing and that more people will see the value and beauty that await them should they make different choices — and people don’t have to face the negative consequences that they used to. These new roots that I’ve planted are important because they represent things that I think are valuable, and fun, and of inherent importance.

What does it mean to you to be of Celtic heritage?
There is no such thing as “Celtic genes,” so ancestry in itself doesn’t define a person as Celtic, or Gaelic, or whatever: what’s most important are the choices that people make to honour particular cultural and linguistic values and allegiances. You find people with Celtic names like MacDonald, or Kelly, or Kennedy who are no different from the Windsors or Bosworths next door because they’ve assimilated into the dominant society. That’s not to say that they’re bad or any better or worse than anyone else, it just means that they belong to a different cultural makeup.

How are you involved with the Canadian Celtic community?
I’ve done a lot of writing over many years about many different aspects of Scottish Gaelic history and culture, in both Scotland and North America, and I get a lot of email from people who read my work, so I know it’s making some impact. I’ve been in Canada just over four years, teaching Celtic Studies at St Francis Xavier University. Besides teaching, sometimes I get pulled into heated debates about Scottish tradition; it’s a shame that so many phoney ideas pervade the popular imagination, even amongst people who should know better. I try to attend various Gaelic events in Nova Scotia, and am completing a video documentary about Gaelic in the province, using interviews I’ve done with people I’ve come to know.

Why is it important to keep Celtic culture alive in Canada?
This is a complicated question, because Canada, like the rest of the Americas, wasn’t originally populated by Europeans and you can’t bemoan the oppression of Celtic peoples if you ignore the parallel suffering of the indigenous peoples of this continent who were swept aside. It is a fact, though, that Celtic people are here now, from a variety of causes and reasons, and many came specifically so that they could sustain their cultures and languages, which were being crushed in their homelands. They evolved new forms of culture for a while, and though most of those Celtic immigrant communities have since disappeared and assimilated, the struggle to keep Scottish Gaelic alive in Nova Scotia is still on-going, and there will always be people who want to learn about the language and culture of the Gaels. It’s pretty cool stuff. I think the world will be a better place if all indigenous peoples – wherever they happen to find themselves living – support and respect each others’ efforts and prevent the handful of imperial languages from dominating everyone everywhere.

In your estimation, are we doing enough to keep Celtic culture alive here?  If not, what can we be doing better?
Absolutely not. Of course, the crux lies in what we mean by “culture.” Some will be satisfied with playing the fiddle or doing step-dance, but these are actually pretty young musical forms — in fact, I would label them the “least Celtic” elements of Scottish Gaelic tradition, because they were derived fairly recently from French tradition. It’s not that I dislike them – I really enjoy them myself – but they’re really pan-European art forms. The older Gaelic song forms are much closer to the core of indigenous Gaelic values and culture and you need the language to participate fully in those. And once you have the language down well, you can access the stories and the proverbs and a whole host of material. One fundamental problem is that Canada doesn’t really question the concept of multicultural[ism] very deeply. It seems to mean by default that people speak English, try to be able to function in French when necessary, and ignore everything else. It doesn’t help First Nations, and it leaves the Celtic languages (and others) dangling without credible support or leverage.