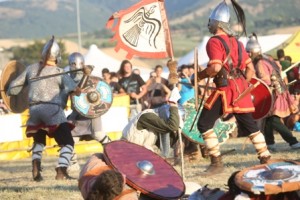 Italy’s Montelago Celtic Festival has grown rapidly since it was founded 11 years ago. Organizers Maurizio Serafini and Luciano Monceri describe the popular event that will be held August 2-4.

What is your own ethnic heritage/background.

We are from the Marche region of central Italy, which, before the expansion of the Roman Empire, was a territory inhabited by Celtic tribes called Gauls. There are many archaeological remains that bear witness to their presence: from the discovery of jewelry at Sassoferrato, in the central province of Ancona, to fortification ruins on the hilltops around Montelago and Colfiorito, where the festival is held. It is therefore quite appropriate for a Celtic festival to take place in the Marche on the Colfiorito plateau.

How, when and why did you get involved with the event?

Everything stems from our great passion for Celtic music and the crystal clear sounds of its acoustic instruments. It made ​​us dream from an early age of ancient worlds populated by fantastic creatures, maidens, and knights with high human and spiritual values.

What is the event’s mandate?
Every year, the Montelago Celtic Festival attracts 20,000 people from across Italy and Europe through a philosophy of civil and joyful association, a rapport with the elements of nature, and the enjoyment of a healthy, carnival atmosphere based on dancing, social encounters, European identity, an awareness of history, and the best cultural values ​​of man. It also represents a brief escape from the hectic pace of modern life.

How has it grown over the years?

The festival began as a one-night show under the administration of the Province of Macerata. It immediately drew a crowd of 5,000 and later became an annual, autonomous initiative. That first Celtic Night has become a bona fide festival, offering the opportunity to spend the whole weekend in campers and tents on an alpine plateau 800 meters above sea level. In addition to the concerts, festival-goers can enjoy a Celtic craft market, thematic conferences, music, dance and traditional craft workshops, Celtic games, a rugby tournament, the art of divination, Celtic weddings, paragliding, horse-riding, and battle re-enactments. In addition, through the internet and social forums, a genuine Montelago community has emerged, constantly participating in discussions on programs and services.

Who attends the gathering?

The festival is popular with people of all ages from around the world, with a large representation of youth between 18-35.

What can they expect this year?
We expect an increase in attendance of about 8-10 per cent. We will offer improved reception facilities, public services, and more staff. In addition, the concerts will feature music by groups from European countries that are not of Celtic origin, including Poland, Latvia, Slovenia and Austria. This demonstrates how Celtic culture is becoming a phenomenon of international interest.

Why is it an important event for the local Celtic community?
Montelago Celtic Festival is the largest Celtic cultural event in Italy. The Celtic theme, combined with traditional Italian hospitality and the quality of food and wine, create a unique experience.

How else are you involved with the Celtic community there?
In addition to the main August event, the Celtic community produces year-round Celtic-themed musical and literary events. In the winter, theaters, auditoriums and schools are used for music festivals, courses in violin making, dance, music, literary meetings and conferences, and television and radio broadcasts.

What are the plans for the event in the years ahead?
The main priority for the Montelago Celtic Festival community is to expand its reach internationally. For years now, we’ve had the patronage of the Embassy of Ireland, and we also collaborate with SOAS (School of Oriental and African Studies), University of London. In the future, we’d like to partner with other international festivals and develop collaborative relationships with incoming tourism agencies, as well as European and world-wide media partners interested in Celtic culture.