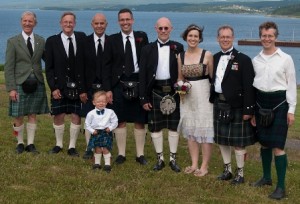 Wedding planning is complicated, but incorporating Celtic language revival into your nuptials makes it doubly challenging.

My husband and I met through Gaelic. It was love at first sight, at a salt codfish supper at the Highland Village Museum, An Clachan Gàidhealach, in Cape Breton Island, Nova Scotia. We were there on a bus trip from the Scottish Gaelic Studies Conference which was being held at St. Francis Xavier University in Antigonish. It was July 2008 and I was presenting a paper on adults learning Gaelic, and my husband was there because of his voluntary work with Gaelic in the province.

So, when it came time to plan our wedding, we wanted to have the entire thing in Gaelic. We both speak the language and advocate for it, it’s a big part of our relationship, and we are always looking for more ways to use it meaningfully in our lives.

We agreed that the best place to have our wedding would be at the Highland Village Museum where we met, because we’re romantics and the museum contains a decommissioned church building. The relocated Malagawatch Church was originally built in 1874 on the shore of the River Denys Basin, replacing the first one constructed there in 1829. The congregation and ministers were Gaelic speaking for over a century.  It remained a Presbyterian church until 1925, when it joined the newly formed United Church of Canada. With the population declining in the area, the church was eventually closed, and in 2003 the structure was relocated to the Highland Village Museum by loading it on a barge and floating it down the Bras d’Or Lake. It now serves as a beautiful beacon of Cape Breton’s Gaelic heritage on the hill overlooking the water.

After securing the historic location, we faced a new problem: finding someone who could perform the ceremony in Gaelic. I assumed it would be our minister, Reverend Ivan Gregan of Port Wallis United Church in Dartmouth, who grew up in a Scottish Gaelic-speaking village in the Miramichi area of New Brunswick. But no: Ivan was booked to lead a church trip to Ireland on our wedding date.

We found only one other minister in the province who spoke Gaelic, and sadly he was unwell. There are still several Catholic priests who speak it, but we needed a minister.

Having exhausted every option, I started to pray. I said, “OK, God, if you really want this wedding to happen in Gaelic, please send me someone who can officiate.”

Soon after, I was driving down Oxford Street in Halifax, when I noticed that the car in front of me had a Gaelic bumper sticker. I didn’t recognize the car, and wondered if it could be a Gaelic speaker who I hadn’t met. I decided to “follow that car,” as long as it didn’t get on the highway heading out of town. Eventually, it turned down a side street and into a parking lot. I pulled in a few spaces away, rolled down my window and yelled, “Hello! I have to ask you a question! A bheil Gàidhlig agad?” (Do you speak Gaelic?)

He indicated, “Tha” (Yes) and I asked, “Co as a tha thu?” (Where are you from?) We had a brief chat and exchanged e-mail addresses. I learned that my new acquaintance was The Honourable Judge Jamie Campbell of the Provincial Court of Nova Scotia. “Nice one,” a friend congratulated me. “You stalked a judge!”

Jamie told me he was surprised when I approached him: “I normally would just default to English, but the whole thing seemed surreal and I was content to have it remain that way. I told her in Gaelic that I was from Cape Breton, but because she’d asked in Gaelic I also told her that all of my people were from North Uist.

“Three of my grandparents were Gaelic speakers,” Jamie continued. “My father’s father and my mother’s parents were each from North Uist families who arrived in the same part of Cape Breton in the 1830s. My grandmother was particularly proud of her Uist Gaelic. I would occasionally hear the language at family gatherings and recall one party in Mira where Gaelic was used in the kitchen and English in the good room.”

I was delighted to meet Jamie, but it wasn’t until a few weeks later that I realized: Judges can perform weddings! Jamie agreed, but says now that he was nervous about taking it on: “It appealed to me on one level but I was fully conscious of my lack of comfort in Gaelic,” he said. “Wondering what my grandmother would have thought of the whole thing made me committed to doing it. I’m quite sure she would have corrected my pronunciation but the whole process was almost symbolic to me. It was someone else’s wedding I know, and it’s not about me, but at the time I felt an amazing connection with my own family.”

So Jamie would officiate, but we still needed a ceremony. Rev. Ivan obtained a copy of the Church of Scotland’s official Gaelic service and I modified it in a linguistic labour of love. Jamie’s own minister reassured him that using this form for marriage wouldn’t be a problem for a lay person, and Ivan coached him on the liturgical Gaelic. I selected hymns, the 23rd Psalm, and a scripture reading, added a congregational response to a prayer, and substituted a new benediction. The main change, though, was adding a new section based on part of the United Church of Canada’s wedding service for blended families. I rewrote this Promise to the Child, adapting it to the expressions and structure of the Gaelic service. During this part of the ceremony we took turns promising to love and care for my daughter, Eri, and presented her with an Irish silver pendant with a triquetra knot inside a heart, to symbolize both the Trinity and our new family.

On our wedding day, we were blessed with gorgeous Cape Breton summer skies. The photos say it all. We poured most of our linguistic efforts into the ceremony, but our reception also featured Gaelic touches. We picked blueberries and made jars of home-made jam for favours, decorated with a bilingual label. I made a banner for our reception with the second half of a well-known Gaelic proverb: Thig crìoch air an t-saoghal, ach mairidh gaol is ceòl – The world will come to an end, but love and music will last.

If you want to incorporate Scottish Gaelic into your own wedding, but don’t speak the language, a Gaelic psalm or hymn would be suitable because singing is at the heart of Gaelic culture. If you prefer a secular song, be careful – many Gaelic ballads feature pining and jilted lovers. I remember a well-meaning friend suggesting Gràdh Geal Mo Chridhe for our own ceremony (the original Eriskay Love Lilt), but it ends with: “You left my eye tearful… my heart broken… You left me with a sickly pallor… and thinning hair.” Not terribly romantic.

You’ll also need to find someone who can sing in Gaelic, who speaks or has at least studied the language. It’s best not to ask someone to sing a song or recite a prayer in Gaelic if they’ve never studied the language before – at least if you still want to be friends after the wedding! But, it’s never too late to start learning Gaelic for your own future wedding or vow renewal, for someone else’s, or for the future of the language itself.