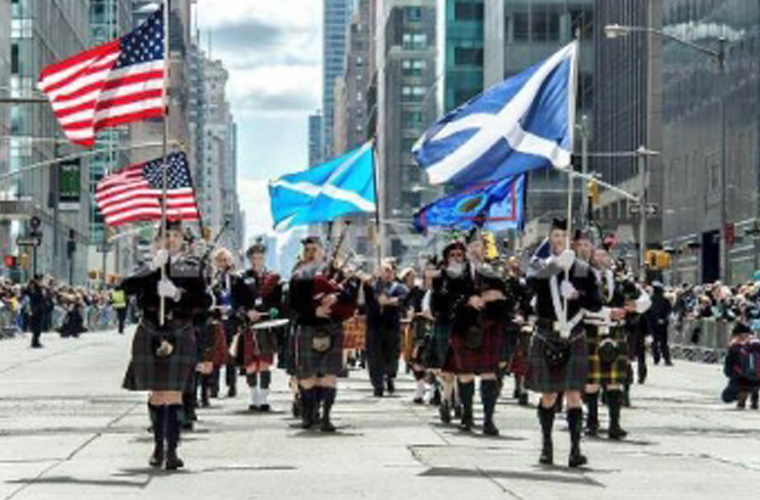 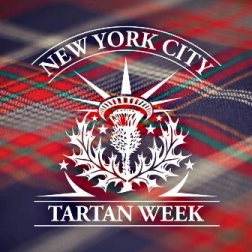 Against a backdrop of spiraling grey skyscrapers, the ancient call of bagpipes will lead graceful dancers, clan members and re-enactors in full regalia, thousands of plaid-clad participants, and a multitude of wee Scottish dogs for the 19th annual Tartan Day Parade in midtown Manhattan on April 8.

Something about the skirl of the pipes and the swish of the kilt stirs a sentiment in Scots, many of whose ancestors left the highlands and lowlands for a better life in the New World generations ago. Even non-Scots are apt to wistfully search their ancestral tree for a hidden highlander.

“People from all over the world who have ties to Scotland, whether it be for their own heritage, or a passion for this beautiful culture, love to join our celebrations in New York,” says Kyle Dawson, who heads the National Tartan Day New York Committee (NTDNYC).

The week-long gathering is a key component of New York’s Scottish community, notes Dawson, as it showcases many aspects of Scottish culture, including music, dance, food, drink, and – perhaps most notably – hospitality.

“We want everyone in,” he insists, referring to the tens of thousands who attend from the United States, Canada, Scotland, and beyond. “As is Scottish custom, we won’t turn anyone away.”

Dawson was recently in Scotland to finalize last-minute details of the parade. He notes that Tartan Week is a monumental collaboration between the Big Apple’s Scottish organizations, including the St. Andrew’s Society of the State of New York, the New York Caledonian Club, the American-Scottish Foundation, Clan Campbell, and most recently, Carnegie Hall.

In the late 1990s the Scottish Coalition USA, led by longtime Chairman of the American-Scottish Foundation Alan Bain, was tasked with developing a major event to honour Tartan Day, which was established by Jean Watson of Canada in 1986 to commemorate the signing of the Declaration of Arbroath in 1320. The historic document asserted Scotland’s sovereignty over English territorial claims, and was an influence on the American Declaration of Independence.

In 1998, Bain led the first “Parade” up a NYC side street. That same year, National Tartan Day was officially recognized on a permanent basis when the U.S. Senate passed Senate Resolution 155. This was followed by a companion bill, House Resolution 41, which was passed by the U.S. House of Representatives on March 9, 2005. The passage of these bills was aided by the work of the National Capital Tartan Day Committee.

And while the day is now commemorated around the world, the NYC celebration is the largest of its kind on the planet.

“If you can, we suggest being here from April 2 to 11,” says Camilla Hellman, President of the American-Scottish Foundation, explaining that the original Tartan Day gathering has now evolved into more than a week of events.

The major activities, including the parade, ceilidhs, concerts, and whisky tastings, will take place from April 5 to 9.

The centerpiece of it all, of course, is the April 8 parade, which will highlight massed bands from around the world marching up Sixth Avenue, from 44th Street to 55th Street.

Grand Marshal for this year’s parade is Scottish film and television actor Tommy Flanagan, who grew up in Glasgow.

“It is an honour to celebrate my culture,” says the thespian, who broke into acting with the now-classic Scottish film, Braveheart, but is best known for his role as Filip “Chibs” Telford in the hit FX series Sons of Anarchy.

He maintains strong ties with his ancestral homeland, frequently returning to visit family and friends. “I have great pride in my heritage. I will have my daughter flying her flag forever.”

While Dawson has a hand in many of the week’s events, the parade is his favourite part of the annual festivities.

“Seeing all the people waving a Scottish saltire flag in the air, as they march up Sixth Avenue is a truly amazing thing to experience. Over the years, we have really grown, with more people coming out to take part each April.

“The parade really brings out the best in all involved, and you can’t help but smile and feel uplifted.”

The music is sure to strike the ear, but it is the colours that will strike the eye as parade-goers flaunt kilts, ties, shawls, scarves, and skirts, in all manner of tartans.

One of the day’s highlights is the inclusion of close to 100 Scottish, tartan-clad canines, including perky West Highland White Terriers, and feisty black, brindle, and wheaten Scottish Terriers.

“People love the seeing the dogs involved, especially the children,” says Heather Quist, Director of the American Scottish Foundation. “They have become an essential part of the occasion.”

Before the parade, patrons are invited to attend a traditional Kirkin’ o’ the Tartan service at Brick Presbyterian Church on the city’s Upper East Side. Soon after, a Pipes and Drums performance on Fountain Terrace in Bryant Park – one of a series of Tartan Week concerts held throughout the week – picks up the tempo, preparing participants for the pomp and pageantry of the parade.

Once the the parade is completed, attendees are welcome to attend a number of “after party” celebrations.

“We began having an after party because the pipe bands wanted to keep playing!” laughs Dawson. “It has become such a large spectacle that we have had to change the location for space and better accessibility. It is a four-hour long concert, and we welcome everyone to enjoy the great entertainment.”

Over the years, Tartan Week has evolved into an umbrella event that includes clan gatherings, seminars, and the sampling of Scottish libations in some of Manhattan’s finest watering holes.

Nearby, on Ellis Island, Clan Currie will welcome thousands of visitors and lead them through exhibits showcasing the Scottish Diaspora in America. For those weary from walking, the National Theatre of Scotland is performing The Strange Undoing of Prudencia Hart at McKittrick’s Hotel, which has been transformed into an intimate and spooky Scottish pub.

Hellman and Quist, both transplanted New Yorkers, were each drawn to Tartan Week for its sense of familiarity and inclusion.

“I grew up in London but we would spend time each year up in Scotland,” says Hellman. “My first Tartan Day Parade was in 2002 when a group of us, all transplants, heard about this huge gathering of pipers. It was a fantastic day. I was working on various projects that involved transatlantic relations, and that was that – I became involved. I just love to see Scotland celebrated in this way each year.

“I grew up in Montreal, and still have family up there, so I have always been aware of the strong ties between people in Canada and the United States and Scotland. When I came to New York many years ago I was looking for organizations that would give me a sense of community, and thus I was drawn to the American Scottish Foundation and Tartan Week.”

Alan Bain, who has spent more than a quarter century promoting America’s Scottish roots, is proud of how the original Tartan Day has “expanded multifold” since it was first staged on city sidewalks almost two decades ago.

“The parade, in particular, is a beautiful spectacle. The event builds vital ties between our American Scottish community and the Scottish people, and it strengthens our relationship with Scottish organizations in Canada and elsewhere.

“And not only is it another amazing New York experience for our visitors, but it is a celebration of a strong and proud cultural thread in the colourful fabric of American society.”