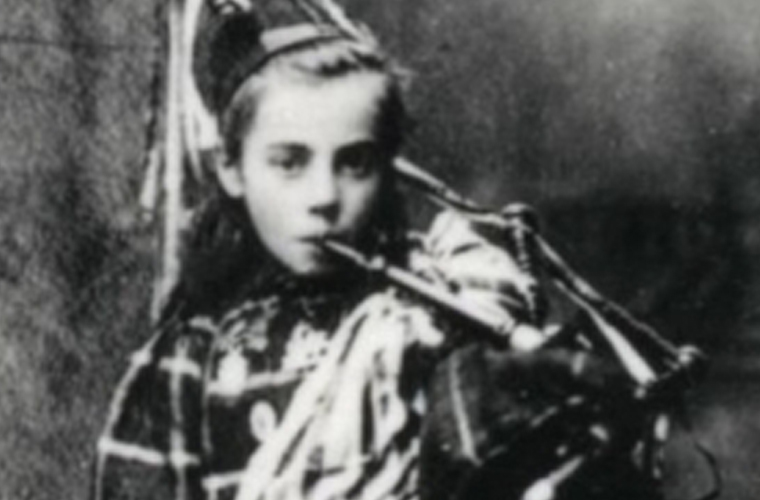 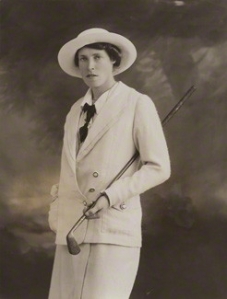 Bessie Watson was born on July 13, 1900, to parents Agnes Newton and Horatio Watson, who raised her in their small house on the Vennel in the heart of Edinburgh. As a young girl, Bessie was described as small, frail and “bandy-legged” – but of good nature.

When she turned seven, Bessie’s aunt Margaret contracted tuberculosis – an incident which would change the youngster’s life forever. Margaret lived with the family, and Bessie’s parents, worried that she might fall ill to the contagious disease, encouraged her to take up the bagpipes in a bid to strengthen her weak lungs. Her first set of pipes was specially-produced according to her diminutive stature as she was too small to properly inflate an adult-sized bag. The half-sized set of pipes was purchased from Robertson’s pipe makers at 58 Grove Street. “I hurried home from school and carried it, in a brown paper parcel down to my (music) teacher”, Bessie recalled. As one of the very few female bagpipe players in the world at that time – not to mention one of the youngest – Bessie took to her new instrument with great enthusiasm.

Within just a couple of years she would be showcasing her talents up and down the country to thousands of spectators. Involvement with the suffragettes

At the height of the UK suffragette movement, Bessie was playing at major demonstrations and parades for the Women’s Social and Political Union, including the famous procession through Edinburgh on 9 October 1909. On that day a large crowd watched as hundreds of banner-laden ladies, wearing the suffragist colours of purple, white and green, marched down Princes Street before congregating at Waverley Market for a rally led by Emmeline Pankhurst.

“When we came out my mother and I were members of the WSPU and I was booked to play the pipes in the Historical Pageant in October. “They asked me because there I was, a girl doing something which they always associated with men.”

Bessie’s parents had always been keen for their talented daughter to show off her abilities and make her mark on history. They were also ardent supporters of the women’s suffrage movement, no surprise perhaps when you consider that the Salvation Army’s women’s shelter was on their doorstep.

On June 17, 1911, Bessie was invited to lead the Scottish contingent with other female pipers at the Great Pageant in London: “(It was) just five days before the Coronation of King George V. The procession was five miles long”, Bessie said of the event. And, just a few weeks later, for George’s state visit to Edinburgh, Bessie, leading the 2nd Edinburgh Company of the Girl Guides, received recognition from the king himself as she raised her salute. Having secured regal acknowledgement in time for her 11th birthday, Scotland’s youngest female piper continued in her quest to support women’s rights, accompanying inmates bound for Holloway Prison to Waverley Station and playing the pipes as their trains departed. Bessie’s rousing skirl also made a regular appearance outside the walls of Edinburgh’s infamous Calton Jail in an attempt to raise the spirits of the suffragettes locked up inside. And during the Great War, while the suffragette movement was put on hold, a teenage Bessie, dressed in full Highland garb, joined ranks with the Scots Guards to aid the call to arms for volunteers.

An Iron Age queen for an Iron Lady

For the part she played in Edinburgh’s historic women’s rights pageant of 1909, young Bessie received a special gift from one very prominent individual: “A few weeks later Christabel Pankhurst (daughter of Emmeline) came to Edinburgh to address a meeting at the King’s Theatre and I was invited to attend. “During the evening I was presented with a brooch representing Queen Boadicea (Boudica) in her chariot, as a token of gratitude for my help in the pageant.”

The huge significance of this symbolic gesture was not lost on the 9-year-old girl piper. In 1979, Bessie passed the brooch on to the newly-elected Margaret Thatcher. As a young woman, Bessie had fought for the right to vote, a fight which took until 1928 to be resolved. Now, here she was, more than fifty years later, passing on this poignant token bearing the image of a heroic Iron Age queen to Great Britain’s Iron Lady and first ever female prime minister.

In 1926 Bessie moved with her parents to a new house on Clark Road, Trinity where she would remain for the rest of her days. Following her marriage to electrical contractor John Somerville at the end of the Second World War, Bessie devoted her life to teaching music and foreign languages. Former neighbours recall that, even into her late eighties, Bessie continued to play her bagpipes at 11am every morning. It was something she had always done.

Bessie died in 1992, two and a half weeks short of her 92nd birthday. Over the course of her long life she had experienced almost a century of social progression and upheaval, and had played her part in changing the world for the better. Bessie’s exploits are as relevant today as they were back then, yet her name has been mostly forgotten. If there’s anyone who deserves a memorial in Edinburgh, it’s Bessie Watson.