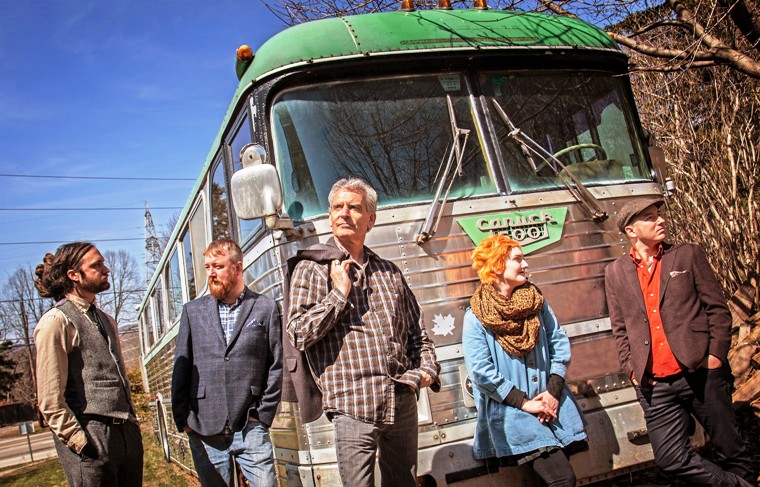 While life on the road isn’t always easy for Celtic musicians, the rewards of performing at Highland Games and Celtic Festivals is worth the work.

It was fortunate that Celtic Life International was able to catch Cassie & Maggie MacDonald during their brief few weeks home in Halifax, Nova Scotia. Throw a dart at the musical duo’s calendar and chances are high that you would hit one of their many dates on the road.

“We have been home maybe two weeks now,” guesses Maggie, during an in-person interview.

“We were overseas for a whole three months,” adds Cassie. “As of July 1st, we will be gone right up until the end of September, so it will be another busy year for us.”

A pair of 20-something sisters, Cassie and Maggie are quickly establishing themselves as musical mainstays on the Celtic festival circuit.

“Cassie plays fiddle, and I play guitar and piano and sing lead – Cassie sings harmony,” explains Maggie. “We sing in both English and Scots-Gaelic.” 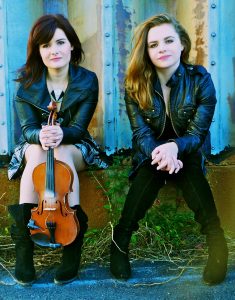 “We grew up in a very traditional Celtic musical family,” adds Cassie, “surrounded by fiddle music, highland dancing, and step dancing, so it was very natural for us when we were young to pick up instruments and become musicians ourselves.”

Interest in Irish and Scottish festivals has blossomed in the U.S. in recent years, giving the duo a chance to be seen and heard in huge milieus.

“We have been touring professionally for the last five years,” says Cassie. “We mostly travel to the States during the summer festival season, and that’s really where we have built our core audience.”

“That is a great way to get new fans,” adds Maggie. “People pick which day to attend a festival largely based on the musical headliner, but they will be there all day long, listening to upcoming artists.”

It is not just newbies finding new blood among their fan base at Highland Games and Celtic Festivals.

The Mudmen have been touring the world and proving that you can rock-out with a bagpipe since the 1990s. They have only been doing the festival circuit for the last decade, however.

According to founding member Sandy Campbell, festivals are a great place to introduce your sound to fresh ears.

“Festivals are really where its at for us,” says Campbell over the phone. “There is a guaranteed crowd – and performing in front of a large amount of people will surely make some new fans.”

“For us, the main meat and potatoes are those Irish festivals – their crowds are massive. If you get the opportunity to play in front of them, and they like you, then you just climbed up one more rung of the ladder.

“Realistically, there is going to be a lot of people simply coming for the event itself – so there are plenty of folks who are just walking around. Our goal is to convince them to stop and listen to us.”

Cassie and Maggie agree that performing before large crowds demands a strong stage presence, both to capture and maintain audience attention. 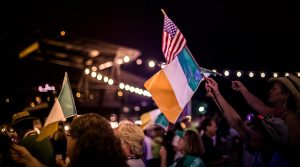 “It can be quite challenging, because sometimes listeners have eight other choices of stages,” says Cassie. “Or they could be getting a hot dog, or they could be walking around in the park – so, how do you get them to sit there and really take-in your whole performance?”

Fortunately, playing the festival circuit has helped them to hone their stagecraft – often by getting inspiration from watching other acts work their magic.

“You hear what people are doing, and how they are making an impact,” continues Cassie. “I really enjoy watching how bands work the crowd, and how they can draw an audience in. I have learned a lot about what to do on stage – and what not to do – from other bands on the road.”

Captivating an audience is far from the only issue for the life of a touring act on the festival circuit. Dedicating as much of your life to time on the road – or often in the air – can take its toll on both one’s social and family life.

“It is challenging to be away from your friends and family for extended periods,” says Cassie, who finds it hard to catch up with loved ones for fear of inundating them with nothing but stories of life on the road. “It is can be difficult for the people in your life to relate to the lifestyle that you are living.”

That lifestyle is not as glamourous as you might think; frequent flights, long hours on the road, and worrying about making enough money to keep the act going are all part of the deal.

According to Campbell, making it as a touring musician comes with a lot of dedication, sacrifice, and a serious balancing act between the demands of being on stage and those of daily life.

“Keep your day job – even if you can find a job that you can come and go while you are touring. Actually, the name ‘Mudmen’ comes from the fact that my brother and I toiled at brick work for years – the mud man is the guy who mixes the mortar and supplies the brick to the bricklayer.

“All those years that we were signed to EMI Records…Rob and I were pouring cement or digging a hole – we were working.”

“The average lifespan of a band is four years,” adds Steve Phillips, who acknowledges that The Elders are fortunate to have enjoyed a two-decade career. “You just put on your blinders and go for it as hard as you can, knowing that you only have this little window of opportunity. You’ve got to get it done while you can.”

Phillips, who sidelines as a music producer, says that this year will be The Elders’ last tour season. 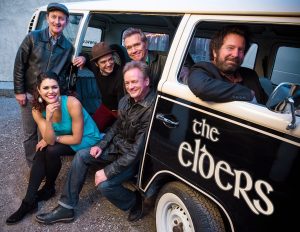 “We really don’t have much to prove anymore – we have a back catalogue of stuff that we can feel very proud of. We are packing it in at a point where everybody is happy and healthy. We are not stopping because we have to; we are hanging it up because we want to end on a high note.”

The Elders got their start as a cover band before creating their own Celtic compositions, and Phillips wants the next generation of touring Celtic acts like Cassie & Maggie to consider covering those compositions – especially if it helps them find their own voice.

“I hope people start playing our songs like the way we played other bands’ songs. If all you do is play cover songs, you are going to reach a plateau, and then there is nowhere else for you to go. Cut your teeth on songs like our songs, but then you’ve got to do your own thing. That’s what keeps the genre moving forward.”