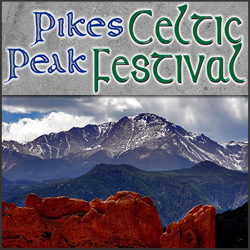 Pikes Peak, Colorado might be one of the most picturesque places in North America. Situated at the heart of the Rocky Mountains, it is an idyllic locale for this weekend’s Pikes Peak Celtic Festival. Event Chairman Joe Poch tells us all about it.

What are your own roots?
Well like a lot of folks whose family heritage was mingled as our ancestors moved west, I am a bit of European mutt per se. Predominately I am Norwegian, German, Scottish, and Irish.

When and why did you get involved with this event?
My Grammy and Granddaddy got me involved at a young age with the culture at large. They were the owners of The Scottish and Irish Regalia Shoppe in town and got me into piping at a young age. I studied piping with the late Pipe Major Gordon Spiers. After his passing I fell away from the piping world and got into Irish Dancing and continued that for a total of 15 years earning a World Championship title with a team at Celtic Steps. For years there was a long standing highland games in town that fell apart around 1999. In 2013, the City of Colorado Springs asked for a “food and wine festival” that would attract visitors from all over. I submitted a proposal stating that it was far easier to attract folks from out of town at a Celtic Festival and so I won the in-kind support from the City and we resurrected the old games under the new name: “Pikes Peak Celtic Festival”

What is the festival’s mandate?
To annually create a large international festival that Celebrates Celtic Heritage with great food, beer, entertainment, activities, and more.

Why is it an important event for the community there?
With the fall of the local highland games and an aging group of leaders from the local organizations, it’s extremely important for the state to have a Celtic Festival that is oriented towards providing the best in entertainment and cultural activities that is suitable for all ages but particularly engaging for young adults.

Who attends the event?
The festival encompasses several different sanctioned competitions which engages the pipe bands, athletes, dancers, and more in the festivities but the majority of festival goers are average consumers looking for a weekend out in the 25 – 45 age range. We also welcome international bands and groups to the festival to perform and entertain.

What can they expect this year?
Festival goers can expect the always popular “Albannach” this year. They are our headlining band in the Celtic Rock music lineup. We also have a trad. music area, dozens of clans, sanctioned piping and highland athletic competition, authentic food vendors, merchandise vendors, living history, and activities going on all across the field all day.

Will you remain involved with the event in the years ahead?
Of course!

How else are you involved with the Celtic community there?
On September 26 & 27, 2014, we will debut a brand new Tattoo called The Colorado International Tattoo. Colorado Springs is surrounded by five military installations including NORAD which is the international cooperative installation that monitors and protects the sky and airspace of North America. The excellent military tradition of a Tattoo will come to life this year and will of course encompass some of the greatest of Scottish tradition as well as tradition from other parts of the Celtic Isles. The website is www.heroshow.org.

Is enough being done to preserve and promote Celtic culture generally?
I think the starting of new events, festivals, and organizations is always encouraging. If we were all Pepsi and Coca-Cola we would all be in stiff competition but really we are all only brushing the surface of the world or even our local areas.

What can we be doing better?
I come from an age demographic that more frequently emphasizes cooperation rather than competition and I know that when building culture, cooperation is the single most important thing you can do. Everyone is so worried about their individual “brand”. The reality is that all of these brands in this culture were started hundreds of years ago and people show up and get involved because of heritage and modern culture. I hope people can see how working together and getting people focused on the culture is so incredibly important.