Celts of all sorts will be making their way to Oregon this coming weekend, for the annual Portland Highland Games. Recently we spoke with board member Tricia Fairman about what attendees can expect.

What are your own family roots?
I’m an American mutt, a hearty, albeit pale, mix of Scottish, Irish, English, Welsh, German and Norwegian.

When and why did you get involved with the Festival?
I moved to Portland the fall of 2013 and started playing with the Portland Scottish Fiddle Club. In July 2014, I competed at my first Highland games, and in my first “fiddle” competition ever. After the Games, I became involved in the competition and shadowed former fiddle chair Leslie Hirsch before taking over the competition this year. 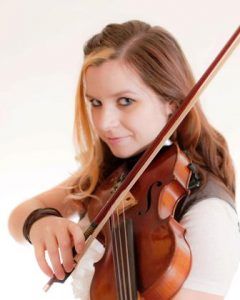 What are your roles and responsibilities there?
I am chairman of the Fiddle Competition of the games. I’m in charge of promoting and recruiting players for the competition, and working with a Scottish FIRE Revival qualified judge to adjudicate the event and workshop.

What are the challenges involved?
Recruitment and promotion are our biggest challenges, in both the competition and for the Portland Scottish Fiddle Club. We are kind of the hidden gem of the festivities, and our gaggle of fiddles can’t quite beat the volume of the mass pipe bands. This year I’ve worked to improve our social media presence for the fiddle club and have been promoting the Games with youth music organizations and schools in town.

What are the rewards?
Getting to work with amazing musicians, judges, and hearing all levels of fiddling. I love seeing competitors evolve from year to year as they perfect their ornaments and the Scottish Fiddle style.

Why is it an important event for the community?
I am a strong believer that heritage and history is important to the community—this is the very essence of what a community is built upon. Whether it be a person’s biological heritage, or a cultural heritage one has a strong affinity, the Games exposes and connects the Portland community to Scottish and Celtic traditions.

Who traditionally attends the Festival?
Anyone and everyone. This festival gathers a large crowd with competitors coming in from Washington, California and Idaho as well as Canada. Attendees are usually Scottish and Celtic heritage enthusiasts, bagpipe lovers and Portlanders wanting to drink good Scotch and beer while watching kilted persons throw big sticks. 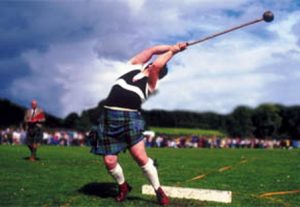 What can they expect this year?
On the entertainment side you have a great Portland local band, Biddy on the Bench, and two great bands from California, The Fire and Golden Bough. Tons of Pipe bands, Dancing, Cabor Tosses, and more. I’m particularly excited by the new cider Portland Cider Company is releasing just for the festival.

How has the event evolved through the years?
It’s evolved by being relevant to all generations and being aware of how the audiences have evolved. We have a modern website and have made purchasing tickets easy – even on a smart phone. It’s just finding ways to make the experience at the Games that much more fun and that much more accessible.

Will you remain involved with the event in the years ahead?
Definitely. Part of my ethos is to share my music and my culture with my community.

How else are you involved with the Celtic community there?
I am a freelance fiddler and have been involved with various bands, including the Bill Tollner Band, Coming Up Threes, Dram and Go, Grafton Street, and Sons of Malarkey, to name a few. I’ve busked on the street corners playing fiddle tunes and you can always find me at Kells for their St. Patrick’s Day festival. I’ve also played at the Galway Bay Celtic Music Festival in Ocean Shores, WA, the largest Celtic festival in the Pacific Northwest. I love to play and dance at the local Irish Ceili dances hosted by Sam Keator, sit in on the occasional session, and am an avid supporter of local Irish pubs. 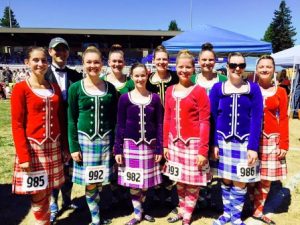 Is enough being done to preserve and promote Celtic culture generally?
In general, yes. I think there are trends where Celtic culture goes in and out of vogue, but I see a lot of support of music festivals, and learning about the tradition and heritage. With the heightened interest in genealogical DNA tests, many people are looking for new, or renewed, cultural connections. If we keep showcasing our culture, exposing new people to it, the traditions will be preserved.

What can be done to improve this?
I think the biggest threat to preserving culture is being too afraid to adapt old world traditions to modern times. There are traditional purists who believe that something has to be done a certain way or shouldn’t be done at all and I believe this attitude kills preservation. Traditions are passed down through generations, and each generation adds a little something more to them. The traditions we have today, though very similar, are different from when they originated, but the essence is preserved. Fiddle tunes tell this story well, for example the tune “Red Haired Boy” originated in the Ireland, but is a popular American Old-time tune, and Gaelic Storm used a version in their of “Beggarman.” The tune, the tradition, has changed, but the essence is preserved and passed down for generations to come.