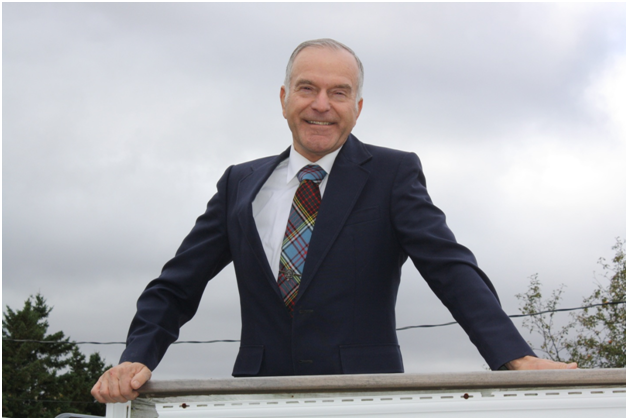 A very special ceremony is taking place in Knoydart, Nova Scotia today as Celts gather to remember the Battle of Culloden. Event co-organizer Michael Anderson gives us the details.

What are your own roots?
I am about 99% Scottish, there’s a touch of English and Irish a couple of generations back. I would like to say 100% Scottish. I enjoy genealogy and certain history, so I really enjoyed my trip to Scotland a few years back with my wife. I got to walk on some ancestral land, and drove through and around some of our other ancestral lands, and in fact saw a lot of Scotland (so much so that when I spoke to one local, they said that I probably saw more of Scotland then they did). My mother is a descendent of one or two of the Culloden surviving soldiers. Her name is Catherine (MacGillivray) Anderson. Her people came from the Highlands of Scotland The MacGillivrays were from the area known as Vamy in the Clan Ranald area fairly near Arisaig (hence the attached name – the Vamy MacGillivrays, originally from Dunmaglass), and her MacDonald mother was of the Clan Ranald MacDonalds from the Arisaig/Morar area on the western shore of Scotland. Sidenote: The Harry Potter train runs past the old Vamy land, and Bonnie Prince Charlie hid in one of the local caves nearby to escape the Sashenachs. My dad’s MacLellan’s are from the westers shores of Scotland, some think the Isle of Skye, (not proven yet – it might be another island nearby); and his Andersons are Lowland (and that is ok too) from around the Aberdeen area.

When and why did you get involved with this event?
Mom and dad attended the official gathering in 1983, and had told me about it – how nice it was, and it of course caught my interest. So, the next year I attended, and was asked to carry the guest book, which I took seriously and tried to get everyone to sign it, and still do. I only missed two or three gatherings since then. I had always been interested in the music (fiddle especially) and the dances. I still attend and enjoy these things.  Around this time, and without knowing it, my mother gave me a challenge. I had joined both the Nova Scotia Genealogical Society, and the Pictou County Genealogy Society, and there was only one fairly local person/member who kind of represented the whole eastern part of the county. I asked my mother about any books that were written about our part of the county, and she said that there were none because our part of the county was Roman Catholic, and the rest of the county was of the Protestant religion. They wrote about themselves, and there were no records of us available. Unknown to me, I took it as a challenge both to find info and to represent the eastern area of the county at the meetings of the Pictou County Genealogy Society. I even did one year as president. Once I caught the genealogy bug, you could say that I had gotten more involved. Finding ‘a needle in a haystack’ in genealogy is both very important, and very satisfying. And I was able to find some books, and also other records were found. My mother, aunt, and some of their cousins, and some others, are descendents of the three soldiers that are buried at this Pioneer Cemetery (once a non denominational cemetery – later blessed by the Catholic Church). A U. S. ex soldier (Seumas Taylor) who was studying at St. F. X, found out about the cairn, and the graveyard, so consulted with local resident Joe (Johnie Joe) MacDonald, who was a descendent of Angus MacDonald, soldier buried here, and they did the first meeting at the cairn, and toasted the soldiers as they had a drink of ‘the water of life.’ So we continue to hold onto our nostalgic past, and try to preserve our old ways that were passed down to us, plus it is a beautiful ceremony with such good numbers of people who attend. We have kilts, bagpipes, marches, prayers, throwing whiskey on the four corners of the cairn, laying of wreathes in remembrance of clans, people, and a few speeches. It is the first outside event of the year, so a lot of people attend. Some springs, the weather is cold, and the ground was usually wet, ( it was said that it was like the actual battlefield in Culloden, Scotland). Our cairn was fashioned after the one constructed on Drummorsie moor, Culloden, and three or more stones were taken from the battlefield to be put into our cairn. I like out cairn better than theirs. These women carried on this tradition of the ceremony, then received much needed support from the Antigonish Highland Society, and the Federation of Scottish Clans, who saw the benefit and need to continue the tradition. When some of these women got older, and tired of some of the hassles involved, they needed people to take over. There is a lot of work involved, and I did not want all the responsibility, so we formed a committee to look after, and preserve this part of our culture and past. It turns out about half of the members are the next generation of these women so too are descendents of the soldiers. Some of the original members have passed on since.

Why is it an important event for the community there?
The church is important in our community and lots of local people get together to help in community events, so it is a big deal. After we come from the cemetery portion of the event, we gather at the community hall for music, a big meal, a guest speaker, and then a ceileigh for the afternoon. I like to call it a ‘full meal deal’ if you attend all the portions of the day’s events. It also showcases the local communities. The (now) Nova Scotia Lieutenant Governor attended for years, and when he moved into his position, and a program was activated, he was instrumental in awarding the local and surrounding area with a lovely Community award, due in part to his interest in the ceremony he attended years ago.

Who attends the event?
Many people attend the event, and for various reasons. We are known in Scotland for hosting the event. There are students from near and far that attend. Some are studying Celtic Arts at St. F X. and are interest in this cultural aspect. Various clans attend, politicians, the Bishop (sometimes – scheduling) , some present day military (plus their bagpiper to lead the march to the cairn and bach to the highway), friends, relatives of locals and some of the buried soldiers, parts of the media, musicians who perform at the hall, some professors from the university, some other dignitaries and sometimes who knows! And they all seem to have a good time, chatting, performing, eating, and enjoying the music.

What can they expect this year?
People can look forward to a good weather forecast this year, a march to the cairn, welcoming, speeches, English and some Gaelic prayers, a great meal, excellent guest speaker (Bard Lewis MacKinnnion), and a great afternoon of volunteer musicians. We hold the event the Saturday following the actual date of the battle, which was on 16 April. 1746. The movement that tried to put the Stewart family back in power for Scotland started in 1745, hence it was called the ’45.

How else are you involved with the Celtic community there?
I continue to enjoy the Scottish music, and travel for most of my ‘old time dances’, and it is interesting to see the different types of dances in various communities. I was on the Parish Council for a good spell some time back, and this event was integrated somewhat, as we use the excellent facilities at the hall which has church connections. I continue to do some genealogy exploring, and am looking at a community family tree, due to so many of the early families marrying locally making many, many people related. There are others of course interested in their families, and one woman even mentioned about collecting all the families’ histories. What’s your fathers’ name? We have always been connected to Antigonish, and area, as the town, and county were mainly Catholic, compared to western Pictou County. Now a days, there are strong ties to western Pictou County too.

Is enough being done to preserve and promote Celtic culture generally?
There are good pockets in Nova Scotia (as well as outside the province) with Celtic cultural activities, and congratulation to all trying to preserve our culture. It is good to see the young and really young entering music, Gaelic learning, and of course dance activities. There are a lot of young people who don’t seem to like some of our music- for various reasons. I think that they are missing a good thing.

What can we be doing better?
I may have pushed our own children too much in hoping that they would be great musicians, and lovers of the dance etc. They, like other youngsters, have their own mind – if they like it they will enjoy it and come to some events, and if they don’t, they will go to things that they enjoy. Like other young people, if their friends like cultural things, then they may get involved with it. All young people should definitely get introduced to it. I think it was in Mabou some time ago that at this dance, there were two bands – one rock and roll – one fiddle band. Even though one group danced to the fiddle, and the other group sat until the rock and roll started. They heard the music and it was in the back of their minds. When the other band started, the second group danced as well as some of the old time music lovers. There are good efforts in promoting the Gaelic language, both if speaking only, and in reading/writing it. It is a hard language, but nice to hear at times. I learned some from my mother when I was quite young. She is considered a native Gaelic speaker, and it is odd in a way to hear some words from other areas that are pronounced a little bit different than that of our local area where so many Scottish people settled. Dad even learned some Gaelic (good and bad – like so many of us!). Sues leus Gaelic! Tapelet!