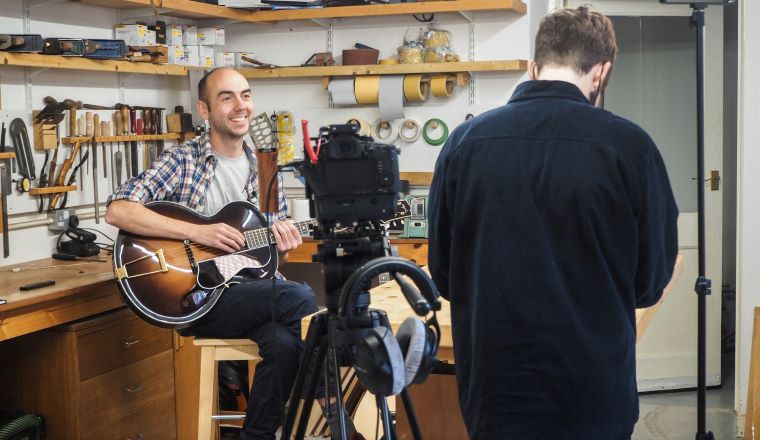 Welsh musician and guitar craftsman Richard Meyrick has wanted to make guitars since he started playing them as a teenager.

“I always struggled with the cheap guitars I learned with that were terrible to play,” he recalls in an email interview with Celtic Life International. “I dreamed of having a good, expensive guitar that would make me play 10 times better, but I couldn’t afford one and no amount of mowing lawns on the weekends would get me one, either. So, I decided to build one for myself.”

Meyrick admits his first attempt at making a guitar turned out “pretty terrible,” though the instrument was playable. He kept at it. He then enrolled at London Metropolitan University to study guitar making and repair, graduating in 2007 and setting up his business just a year later. In the beginning, he was free to experiment as he liked. Now that he has a family to care for and bills to pay, he has become more business minded. As a result, he notes, his workmanship has improved.

“The day-to-day running of a business is not something that I was ever really interested in and I have had to learn along the way. In order to make a success of making guitars on your own, you need to become a master of a lot of trades, from the rough processing of timber right the way through to the final finishing. It has taken a lot of trial and error – and huge amounts of hard work and patience from my family – for me to get to where I am today.”

His company has customers all over the United Kingdom, as well as other parts of Europe. Much of the its success has come from word-of-mouth at folk or blues clubs. 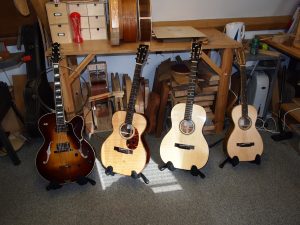 “Reputation is everything in this line of work, and I work hard to maintain mine.”

“Repairing instruments gives me an invaluable insight into the different methods of guitar construction over the last 190 years,” he shares, noting that the oldest guitar he has worked on was from 1832. “I am constantly having to come up with new ways of repairing these instruments. Teaching guitar making also keeps me on my toes and always looking for new ways to do each task. Guitar making, for me, means constantly questioning my work and asking if there are simpler or better ways to reach my goal.”

While a quality guitar requires quality materials, quality craftmanship, and attention to detail, Meyrick points out that the idea of a great instrument is somewhat subjective.

“What may feel great in the hand of one player won’t feel comfortable with another. The sound of a great guitar is much the same. I find that customers have an idea of their perfect guitar in their head and it is often not the same as other customers, which is why I make so many completely custom instruments.”

Fortunately, the luthier has no shortage of inspiration. Born and raised in The Welsh Marches, “between the mountains of mid-Wales and the English border,” he still resides and plies his trade in the area today – specifically, in the town of Abergavenny, near the Brecon Beacons National Park. 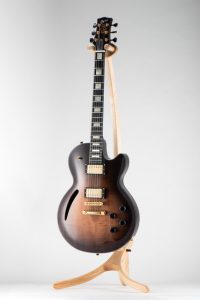 “The mountains around me inspire me every day and provide a great escape from the confines of my workshop.” In fact, all of Meyrick’s base guitar models are named after his favourite Welsh beaches, castles, and mountains.

On top of the natural landscape, Meyrick says that Welsh culture and heritage is thriving in the region.

“There are excellent museums nearby explaining the industrial past of the area. The industrial revolution began in an ironworks just over the mountain, so the area is filled with history. Many of the local theatres put on Welsh language plays as well as Welsh-themed plays in English. I may be a little biased because my son has just started at the local Welsh language primary school, but I think Welsh culture and language is much better supported now than when I was growing up.

“Thirty years ago, speaking Welsh wasn’t cool and the only Welsh culture to speak of was the rugby team and women wearing funny hats (the traditional Het Gymreig). But now, our culture is seen as something to be proud of.”