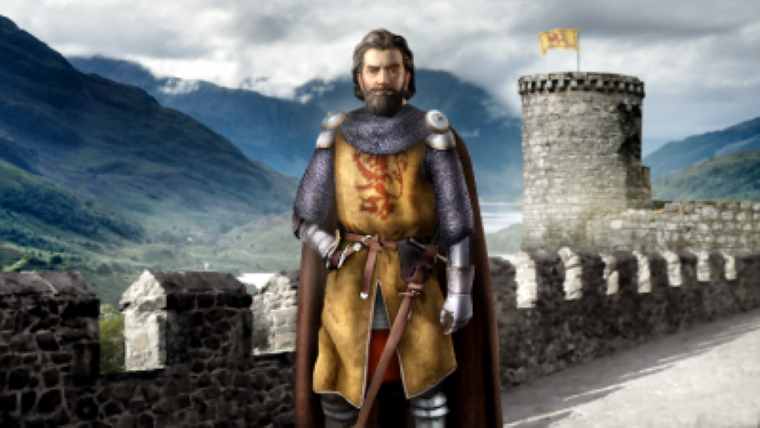 Robert Bruce, Earl of Carrick, was descended from a Norman knight, Robert de Bruce, who came to England with William the Conqueror. His grandfather had been one of the 13 claimants to the Scottish throne in 1291, during the reign of the English king Edward I. Edward had chosen John de Balliol, an English baron, declaring him rightful king of Scotland in 1292. Later, Balliol refused to acknowledge the superiority of the English, and in 1296, was defeated by Edward at Dunbar. Edward then took over Scotland, receiving the oath of fealty from over 2000 Scots. At the same time a nationalistic movement demanding freedom from England slowly began gaining strength among the Scots. Leaders such as William Wallace fought the English but were defeated and executed.

After Wallace’s death, Robert Bruce revived his grandfather’s claim to the throne, and declared himself king of Scotland in 1306. Edward I sent a large army north, defeated Bruce at the Battle of Methven, and forced him to become an outlaw. But Bruce did not give up, and came out of hiding a year later to win an important victory against the English. Clans from all over Scotland now came to his aid, and Bruce’s growing army fought bravely and successfully against the English. Meanwhile Edward I died, to be succeeded by his son Edward II. The new king was no match for Robert Bruce – in 1314, at the Battle of Bannockburn, Bruce’s army of 5,000 defeated Edward II’s much larger army of 20,000, driving the English finally and firmly out of Scotland.

Robert Bruce was known as ‘Good King Robert’ and was undoubtedly one of Scotland’s greatest rulers, bringing peace and freedom to his country.

On the lonely island of Rachrin, off the Irish coast, stood a mean and miserable hut. The chill wind of winter rattled its wooden door, demanding to be let in, sending icy fingers in through cracks and knotholes in the flimsy wooden walls. Inside, a man, his cloak wrapped close about him, lay on a straw pallet set against the wall opposite the door. A fire smoked in the centre of the rough earthen floor, and the remains of a frugal meal lay on a small wooden table. 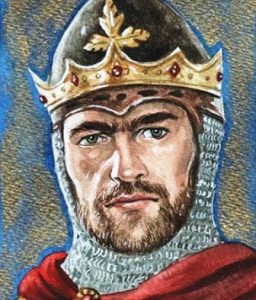 The man was no other than Robert Bruce, crowned king of Scotland, who had been made an outlaw in his own country by Edward I, king of England. Edward I, better known as Edward Longshanks because of his long legs, had defeated Robert and harried him and hunted him, forcing him at last to leave the lochs and craggy mountains of his native land. He had left behind his queen in Kildrummie, his only remaining castle, in charge of his brave and valiant younger brother Nigel. But alas, Kildrummie had been taken by the English, his brother executed, and his queen held captive.

Robert was close to despair: was the freedom of Scotland worth the great price that he was paying? Was it worth the lives of all those slain in battle, worth the misery of their wives and orphaned children? And what of all the men that he himself had killed, one at least not in the heat of battle, but in cold blood?

Perhaps, thought Robert, he should give up his fight for freedom and go instead to the Holy Land, there to fight by the side of the brave knights against the enemies of Christendom. Perhaps that would make up for the killing and the deaths that his ambitions and dreams had brought about. Yet, how could he abandon Scotland, while there was still a hope, a chance, however slender, of success?

The wind howled louder; the fire had died down. Robert lay still and silent on his mean straw bed, oblivious of the cold and discomfort of his surroundings, troubled and disturbed by his thoughts. Suddenly his eye was caught by a spider – the creature was hanging by a long silvery thread from one of the wooden beams above his head, and trying to swing itself to another beam. The spider tried again and again, failing every time. Six times, counted Robert, the spider tried and failed. ‘Six times,’ thought Robert to himself, ‘have I fought against the English and failed.’

Robert looked at the spider more intently. ‘Now if this spider fails again on the seventh attempt, I too shall give up the fight for Scotland. But if it succeeds, I shall try again.’

The spider, as though aware of Robert’s thought, swung itself again with all its tiny strength – and finally, on the seventh attempt, it succeeded. It swung on to the beam it had been trying to reach, and fastened its thread, thus stretching the first line of the web it was trying to weave. Robert Bruce smiled, and sat up. He threw off his despair and grief, and determined to set out for Scotland again and continue his fight against the English. He fought against the English for the next eight years, defeating them and finally driving them out of Scotland in 1314, at the Battle of Bannockburn.