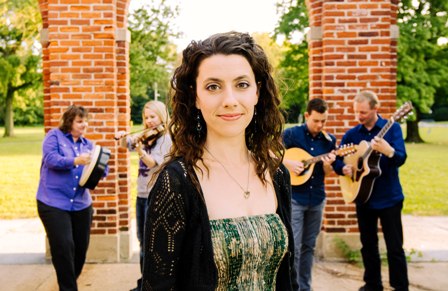 Philadelphia-based quintet RUNA draws on the diverse musical backgrounds of its band members and offers a contemporary and refreshing approach to traditional and more recently composed Celtic material. Recently we spoke with vocalist Shannon Lambert-Ryan about the bands past, present and future.

What is the band’s heritage?
We come from a variety of geographical backgrounds. Fionán is from Dublin, Dave is from Galway, Maggie is from Kentucky, Cheryl is from Montreal, and I am from Philadelphia. The band members are now based in Philadelphia and Nashville.

When and why did you start playing music?
Most of us started playing music, singing, or dancing at very young ages. All of us were wonderfully fortunate to be surrounded by a wide variety of music and incredibly supportive families and communities, as we were growing up. Some of us knew that we wanted to pursue music as a career. For others, certain opportunities arose at the right place and time. But, for all of us, music has been an instrumental part in shaping who we are.

How long has the band been around?
Fionán and I met at the Philadelphia Folk Festival in 2006. We worked together on an album in Fionán’s studio in Dublin, Ireland in February 2008. That album became the basis for RUNA. In August 2008, we had our first gig as RUNA and asked Cheryl to join us on percussion. From then on, we performed as a trio.

How has the group evolved since that time?
With additional musicians joining us for periods of time over the next couple of years, RUNA continues to explore and develop its style around its line-up. We met Dave in 2011 through another Irish band, Slide, which Fionán’s brother Éamonn plays with, as well. Dave moved over to the States and lives in State College, PA now. As a multi-instrumentalist, vocalist, and step-dancer, his musicianship really fills out RUNA’s signature sound and adds a lot of nuances and colours to the arrangements. When Maggie came on board in January 2013, she brought a whole new dimension to the group with her bluegrass and Appalachian influences. We’ve always tried to push the boundaries of the Celtic genre with the music that we play, by using our different backgrounds and interests in our arrangements. It helps to keep it interesting for us and, hopefully, helps to keep it fresh for our audiences, as well!

Why the decision to start performing Celtic music?
It’s just such fun! The music has a fantastic energy about it and its rhythms and melodies are incredibly engaging to audiences around the world. Celtic music offers one of the widest emotional ranges of any genre of music, making it relatable to so many listeners. We so enjoy exploring the emotions and stories of the traditional songs and the intricacies and wonderful energy of the tunes!

Who are some influences?
Clannad, Solas, Mary Black, Django Rheinhardt, Sarah McLachlan, Dave Matthews Band, Nickel Creek, Led Zeppelin, Union Station, Vivaldi, Natalie MacMaster. Anything from Bach to the Beatles! We all have quite varied and eclectic musical backgrounds and interests. We embrace all of them and infuse them into our music and arrangements!

How would you describe your sound today?
We like to think of our music “Celtic Roots music”. Like the roots of a tree, the musical roots of any genre spread out in many directions – the roots that have influenced a music style and the roots that will be influenced by that musical style. The origins of Celtic music are rooted in traditional Irish and Scottish music. In RUNA, we like to explore all of those different roots and musical styles!

What were the challenges involved in recording Current Affairs?
Geography and timing are often two of our biggest challenges. Despite all of the wonders that technology offers, getting to jam together in the same place at the same time is still the best way to play music.  Who knew?! So – since we all live far away from one another and are all very busy with several projects – coordinating schedules, locations, and weather for rehearsals and recording proved to be one of our bigger hurdles to tackle with this album.

What were the rewards?
All five of us in the band were able to be part of the entire arrangement process and contribute equally to the album, this time around. The more of us involved from start to finish, the more ideas are shared, and the further the can be developed. Because of this, we were able to try new ideas, branch out into some new styles, and push our boundaries further than we ever have. We, also, had the wonderful honour of having three amazing musicians join us as guest artists on the album; Grammy Award-winners, Ron Block (Alison Krauss & Union Station), Jeff Taylor (Elvis Costello, Paul Simon), and Buddy Greene (Bill Gaither). What they added to “Current Affairs” was nothing short of spectacular. Their musicianship and friendship has been an incredible inspiration for all of us.

What has the response been like so far?
We have been just thrilled at the reception of “Current Affairs”! The album has been getting a lot of airplay and great press in the States, Ireland, the UK, and Canada! And our fans (our RUNAtics!) have been just brilliant with their support! It all keeps us striving to continue working hard and to make the next album even better! We feel so very lucky to have everyone routing for us!

Describe the band’s creative process.
We are a very democratic group! Everyone brings something to the table and we will try pretty much anything once. After that, we see what’s suitable for the project or performance and, also, look into the future to see what kind of songs or tunes we might need. For larger projects, we’ll often take a longer period of time to research songs and tunes, giving ourselves plenty of options, so, that we can pick the ones that are just right for the band at that time. We try to develop the music over time as the music grows on us. We, often, like to try out arrangements in a live setting before committing them to a recording.

What makes a good song?
A great story, interesting and poetic lyrics, and a beautiful melody. If those elements are there, the rest seems to fall into place a bit easier.

What does the band have on tap for 2015?
We have several big gigs planned for the St. Patrick’s Day season and some festivals for the summer already!

Is enough being done to preserve and promote Celtic culture generally?
In general, more can always be done to preserve any culture. However, looking at the current generation of musicians and bands, we would say that the culture is in safe hands. There has been a fantastic surge of interest in Celtic music, dance, and culture over the past several years and all of the artists on the scene today are incredibly respectful of preserving tradition, while contributing their own creativity, to help keep those traditions moving forward.

What can we be doing better?
Continue to encourage younger generations to be creative and get involved with music early on!