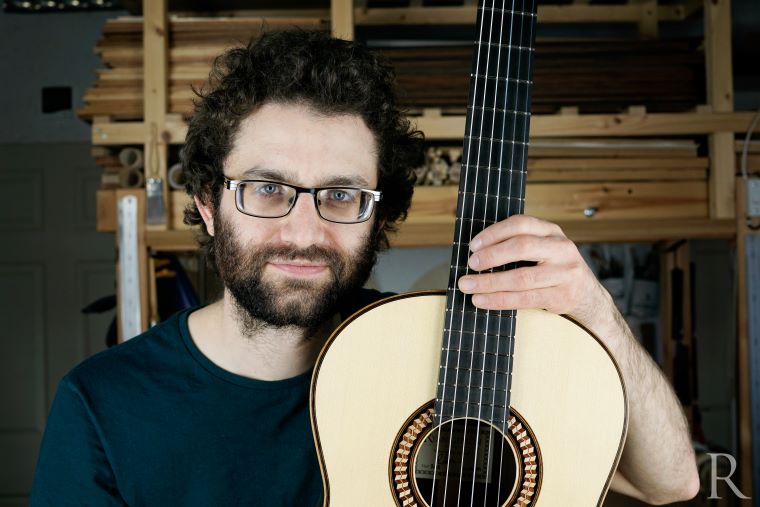 Like all the best stories, the tale of how Ryan Gibson became a guitar artisan begins at the pub.

“Yes, it really is one of those stories,” admits Gibson, who spoke with Celtic Life International via email from his home in Scotland. “I was attending a folk session in a pub in Portobello just outside of Edinburgh. A friend leaned over and said the guy she was chatting to made his own guitar. I think my response was, ‘you can’t make your own guitar!’ Turns out, I was wrong.”

Humbled, but even more so curious, Gibson looked into the instrument-crafting courses available to him in Glasgow. However, as a professional musician he never envisioned taking such classes with a future career in mind.

“At first, I just wanted to keep learning the craft of guitar making without that much intention for it to become my main work. I was enthralled by the craft and its history – these skills that have been passed down from one generation to the next. Any maker today could walk into the workshops of any of the old masters from the 18th or 19th century, pick up their tools, and carry-on working. It is a connection that means a lot to me, and I try to balance the old and the new.”

Evidently, the call of the trade was too loud to ignore. He opened his self-named guitar shop in 2012 in central Scotland. Now that the craft itself had been heeded, Gibson could listen closely to the softer clues in the woods he worked with in order to tease a great guitar out of them.

“I use both machine tools and hand tools; the machines are great at getting some of the donkey work done, but the hand tools are essential for being connected to the work and getting the most from it. It is very tactile. I use the traditional Spanish method, where the top and neck of the guitar are joined first, then the sides, and finally the back. It is a very holistic method – the guitar comes together as one, as opposed to the body and the neck being made separately and then joined. 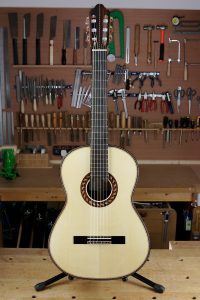 “I listen to the wood as I work it through all the many stages. I flex it and tap it until it tells me it is where it wants to be. There is no shortcut to this process.”

Gibson says that young luthiers often make the mistake of searching for the ‘perfect’ guitar, when there simply is no cookie-cutter solution for how to turn a piece of wood into an instrument.

“Beginner makers are always after the secret ‘code’ to the perfect guitar. They want dimensions and thicknesses that will ensure the best tone. The truth is, there are no set of perfect dimensions I can tell you, as there are no two pieces of wood that are the same.”

He knows that he still has plenty to learn himself, though. Recently, he has been looking at guitar-making with more concern for the sustainability of his materials in mind.

“We all have responsibility in looking after our world, and climate change is ever-present in my mind. The Leonardo Guitar Research Project really opened my mind to the possibilities of using native woods in fine guitars. As a non-profit organization, they are dedicated to educating players and makers to the possibilities of using sustainable wood.

“I have sat and listened to the guitars made from both traditional exotic species and native woods in a live ‘blind’ test, and you really can’t tell the difference. From their research, they have found that listeners tend to hear the difference more between makers than woods. This confirms to me what I already suspected.”

Up until now, Gibson’s guitars have mostly been available just in the U.K. However, he has plans to expand – as soon as the COVID-19 pandemic passes.

“I want to branch out to Europe and beyond. I was all booked in for European guitar expos in 2020, but we all know what happened.”

Until then, Gibson takes on each new project with aplomb, eager to learn something new from each guitar he crafts.

“As the famous French maker Daniel Friederich said when asked which one of his guitars was the best,” quotes Gibson, “he replied, ‘my next one.’”