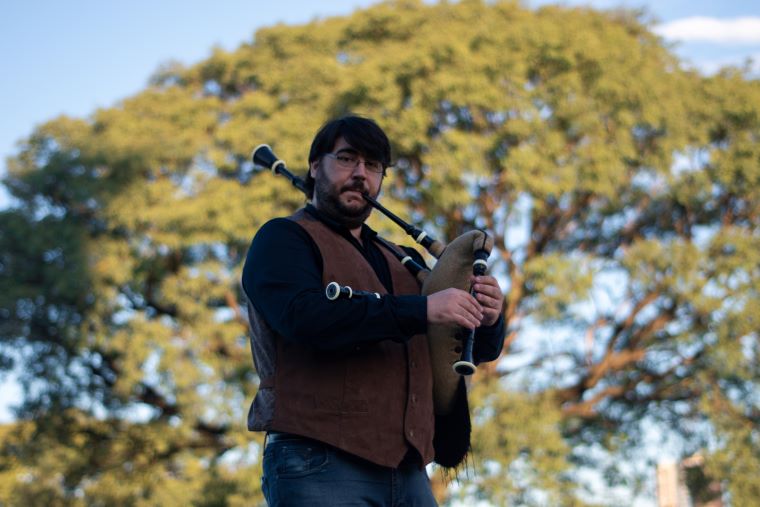 Piper Santiago Molina’s heritage is rich and diverse in culture.

“All of my great grandparents were from different parts of Europe: Galicia, Spain, Ukraine, Italy, Germany…” shares the 33-year-old via email from his home in Palermo, Buenos Aires.

Molina began playing the Galician bagpipes when he was a teenager and has been honing his craft steadily for 20 years.

“I always liked music,” he says. “One of my great-grandparents was a Galician piper from Lugo and in my paternal grandmother’s house they always listened to Galician music and talked about it.”

He originally picked up the pipes as a way to stay connected with – and carry on – the family legacy, noting that “one of the most important things is to be able to spread this incredible music in Argentina and South America, where there still is much ground to break.”

His career has been filled with many notable highlights, including participating in several solo bagpipe competitions in Galicia, winning the Seivane Prize in the Constantino Bellón solo bagpipe competition in 2008, and performing in Costa Rica, Spain, Chile, and Paraguay, alongside the likes of Andy Irvine, Jarlath Henderson, Ross Ainslie and other piping greats. He says that the biggest reward, however, remains the warm reception he receives from fans following a live concert or album release.

Molina most often plays a set of Galician bagpipes, but over the last two years he has been learning the Uilleann pipes as well. He isn’t quick to classify his style of music as “traditional” however, noting that what and how he plays is wholly dependent on the context in which he is performing. 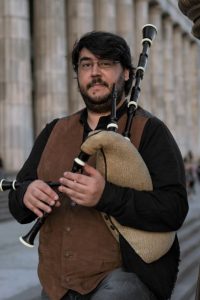 “In my solo project, I look for different things and a style where I can use melodic variations – a more compact sound. I also try to incorporate resources from bagpipers from Scotland or Ireland, but without forgetting the essence of Galician music.”

He admits that working in the music industry is not without its share of challenges.

“I am a completely self-managed musician, and I often organize my own concerts, recordings and productions.”

“The most difficult thing, though, is to keep improving musically day by day. Especially because here there are not many of us who have dedicated ourselves to this beautiful music and traveling to take lessons can be quite complicated. But, these days, thanks to the internet I am able to take online classes with the best traditional musicians out there.”

As is the case in Scotland and Ireland, both Argentina and Galicia have a strong community of bagpipers. Still, Molina feels that more could be done to develop greater involvement among the younger generation.

“It is very difficult because of the local economic situation, which does not make it easy for people to acquire instruments. As well, most of the bagpipers are in the city of Buenos Aires or its surrounding areas. A good way to improve this would be to make the music more accessible so that more people become interested.”

He believes that greater efforts are required to preserve and promote Galician and Celtic culture, both within Argentina and Galicia, and further afield.

“It is very complicated here in Argentina. Currently, I think I am one of the few musicians who is fully committed making a living out of playing and teaching Celtic music. It is a genre with little visibility, although in recent years I have achieved quite a few things that have made people more interested. I think it is only a matter of time and of continuing to do things in the best possible way so that they keep on growing.”

Like most, Molina feels unsure about what the future holds for him, especially amidst the COVID-19 pandemic. Still, he has plenty already lined up for 2021.

“I hope to release my first full album, after having released 2 EPs and some singles in the last few years. On my album, in addition to having traditional music and my own compositions, I am fusing Celtic music with Argentine folklore, which could be quite interesting. My hope is to present it in many places and to be able to go out on tour.”