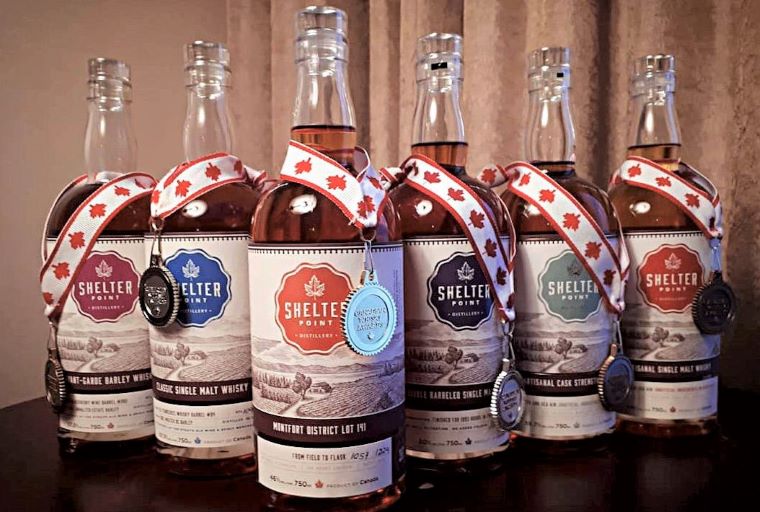 Shelter Point Distillery is located near the hamlet of Oyster River, about 20km north of the towns of Comox and Courtenay on the east coast of Vancouver Island. The region has one of the mildest climates in Canada, making it a popular year-round destination for those from colder climes. The distillery was built in 2011 by Patrick Evans, a 3rd-generation dairy framer, on a 380-acre farm. With stunning views across the Salish Sea, Shelter Point is one of the last seaside farms on Vancouver Island.

I last visited Shelter Point in October of 2018 with a couple of employees from my whisky team, with an eye towards purchasing an exclusive cask for the store. In the end, we purchased two. Upon arrival, we were met by Jacob Wiebe, Patrick’s son-in-law and distillery manager, and Leon Webb, the head distiller. The dynamic duo – who could easily be confused for a comedy act – showed us around the distillery, the visitor center and the maturation warehouse. Shelter Point’s casks mature in part of a converted dairy barn, the rest of which is used as a grain store.

It was slightly overcast, with a faint drizzle, but otherwise warm for autumn. We were told the plan was to have lunch on the beach, and they kept hinting that I might want a jacket. I am rather warm-blooded, and assured them that I would be fine, but in retrospect I should have taken the hint. Unbeknownst to ourselves, the plan was not to have lunch on the beach, but rather atop a mountain. While sitting around a beachside fire pit we were surprised by the arrival of a helicopter. We were even more stunned when we learned that it was picking us up!

What followed was one of the most memorable whisky experiences that I have ever had.

Patrick Evans had arranged to helicopter us high up into the Vancouver Island Mountains, where we would have lunch and a very special tasting on the shoulder of a mountain. I had been to the distillery previously, but it was here, amongst the clouds, that I met Patrick for the first time. We sampled a range of whiskies while snacking on cheese and smoked/candied salmon, just steps from the sheer drop-off of a cliff face. While not unbearably cold, I could have done with a light jacket. Nevertheless, the whisky and adrenaline kept me warm. 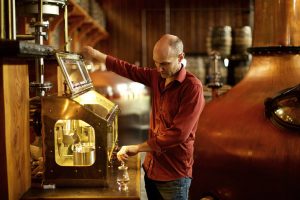 One of the most interesting releases to come from the distillery is their ‘Montfort Series’ – made from estate-grown barley. Lacking the facilities to malt their own barley, the Montfort releases are made from a mash of un-malted barley, in the style of Single Pot Still Irish Whiskey (think Redbreast) – a nod to Patrick’s Irish heritage.

My favourite recent release from Shelter Point is the ‘Smoke Point’ – a second batch of which is due this fall. The whisky used to create Smoke Point begins its life in ex-bourbon barrels before finishing in quarter-casks from Laphroaig. The whisky is kissed by smoke, salt and mildly medicinal tones, while retaining the fruity DNA of Shelter Point’s spirit.

Another interesting recent release from the facility is ‘The Forbidden’ – with a lovely round, oily and fruity profile, and a crisp minerality – a touch of terroir, if you will. Produced from a mash of 100 percent malted wheat, The Forbidden is yet another Canadian first. Shelter Point has racked up more than a few of those in recent years and is without question one of the leaders in the Canadian Craft Whisky Industry.

Shelter Point Whisky and Gin can be found all over Western Canada, though the limited releases are often harder to come by. The distillery is open to the public 7 days a week and offers both tours and tastings. Don’t expect them to fly you up on to a mountain for a tasting, but if they suggest you bring a jacket you might want to take the hint! ~ Story by Andrew Ferguson