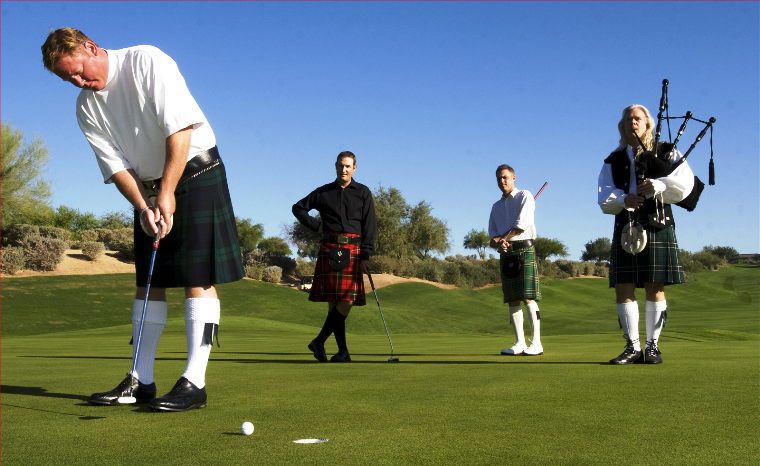 Golf is the closest game to the game we call life. You get bad breaks from good shots; you get good breaks from bad shots – But you have to play the ball where it lies. ~ Bobby Jones

How the Game Evolved

There is general agreement that the Scots were the earliest of golf addicts but who actually invented the game is open to debate. We know that golf has existed for at least 500 years because James II of Scotland, in an Act of Parliament dated March 6, 1457, had golf and football banned because these sports were interfering too much with archery practice sorely needed by the loyal defenders of the Scottish realm! It has been suggested that bored shepherds tending flocks of sheep near St. Andrews became adept at hitting rounded stones into rabbits holes with their wooden crooks. And so a legend that persists to this day was born!

Various forms of games resembling golf were played as early as the fourteenth century by sportsmen in Holland, Belgium and France as well as in Scotland. But it was a keen Scottish Baron, James VI, who brought the game to England when he succeeded to the English throne in 1603. For many years the game was played on rough terrain without proper greens, just crude holes cut into the ground where the surface was reasonably flat! 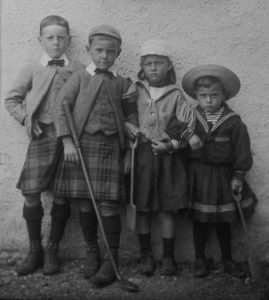 Early golfers played at the game for many years without any thought of forming a society or club until finally a group of Edinburgh golfers in 1744 formed a club called the Honourable Company of Edinburgh Golfers. At this time, the first rules of golf, 13 in all, were drawn up for an annual competition between sportsmen from any part of Great Britain and Ireland. A few years later the Society of St Andrews Golfers was formed and in 1834, when King William IV became the Society’s patron, the title was changed to theRoyal and Ancient Golf Club of St. Andrews.

The earliest clubs formed outside of Scotland was the Royal Blackheath Golf Club of England which came into existence in 1766, followed by the Old Manchester Golf Club founded on the Kersal Moor in 1818. 18th century golf in the United States, while known to exist, did not catch on and it was in Canada that golf first established firm roots in North America. The Royal Montreal Club was formed in 1873, the Quebec Golf Club in 1875 followed by a golf club at Toronto in 1876. It wasn’t until 1888 that golf resurfaced in the United States. A Scotsman, John Reid, first built a three-hole course in Yonkers, New York near his home and later that same year formed the St. Andrews Club of Yonkers on a nearby 30 acre site. From those austere beginnings, golf literally soared as a new national pastime in the United States. A modern jewel, Shinnecock Hills, was founded in 1891 on Long Island and by the turn of the century, more than 1000 golf clubs had opened in North America.

The very earliest club makers were thought to be the skilled craftsmen who produced bows and arrows and other implements of war! The first authentic record of a club maker was in 1603 when William Mayne was appointed to the court of James I of England to make golf clubs for the king and his coherts! Two Scottish club makers are recognized from the late 1600s, Andrew Dickson of Leith and Henry Mill of St. Andrews.

These clubs featured carved wooden heads of beech, holly, dogwood, pear or apple and spliced into shafts of ash or hazel to give the club more whip. Improvements were made by filling the back of the head with lead and by putting inserts of leather, horn or bone into the club face. In time, skilled blacksmiths of the day took on the challenge of forging iron faced clubs, initially without grooves, to provide more loft for shorter shots. The earliest balls were hand stitched leather, painstakingly stuffed with boiled feathers! In 1618, James I of England commissioned James Melvill and an associate to make feathery balls for the court. It was an exclusive grant for 21 years with the balls stamped by Melvill and any other ball found in the Kingdom not bearing his trademark were confiscated! You may well be surprised at the distances achieved by these feathery balls. 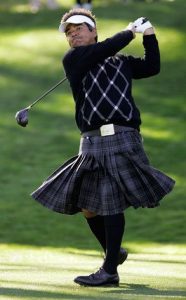 In dry weather, a well struck feather ball could travel 180 yards (165 m) but when wet only about 150 yards (135 m). However, the feathery ball remained king until the middle of the 19th century. In 1848, a golfing clergyman from St. Andrews, the Reverend Adam Paterson, experimented with a substance from India called gutta-percha. It had been sent to him as padding covering a gift and he found that the material could be softened with heat and then molded into a hard ball. The gutty as it was known was not an instant success as the smooth ball tended to duck in flight. Players soon found that its performance improved at the end of a round when the ball received some nicks and scratches. Therefore, newly molded balls were scored all over with a saddler’s hammer with such good playing results that the demise of the feathery was certain.

The gutta-percha ball lasted for approximately 55 years until succeeded by the Haskell ball in 1903. An American dentist, Dr. Coburn Haskell, ran some experiments by tightly wrapping a liquid filled rubbewr core with strips of elastic then covering it with a gutta-percha casing. North American golfers began to take the new ball seriously when Walter Travis, originally from Australia, won the 1901 United States Amateur Championship using the Haskell ball. When Alex Herd won the 1902 British Open Championship again using the Haskell ball, golfers everywhere dropped the gutty and clamoured for the Haskell!

Modern balls have a more durable cover of balata or surlyn and various solid core balls with new synthetics have become popular. As well, we have seen the art of club making go from the original wooden clubs, to forged irons, then steel shafts and finally all manner of metal heads with many types of synthetic shafts. Technology has done wonders for the average golfer but practice, dedication and raw talent still remain a factor as witnessed by Greg Norman’s amazing 63 at Augusta on April 11, 1996, during the first round of the US Masters Championship.