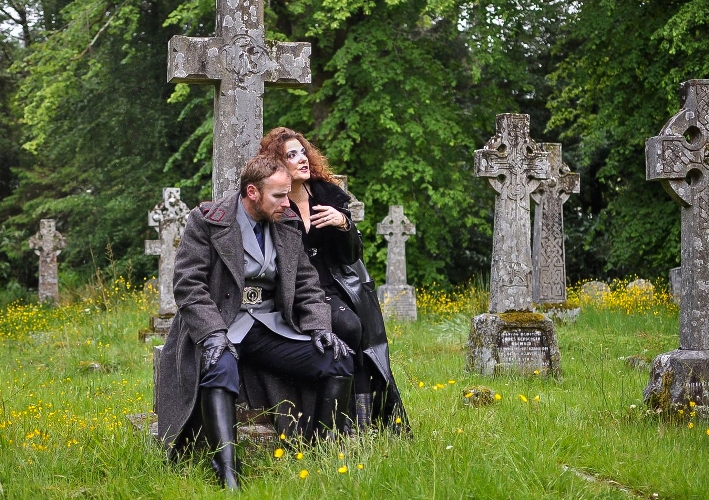 Scotland’s dramatic landscapes have inspired artists and writers for centuries. It is therefore of little surprise that they also inspire Sadie Dixon-Spain and The Walking Theatre Company.

Many theatre companies perform outdoors, but few take the audience on interactive, walking plays through the landscape. At the simplest level, The Walking Theatre Company aims to get people walking and exploring ‘the great outdoors.’ Beyond that, it uses drama to explain why places are the way they are and – in fragile, fragmented communities – it offers opportunities for dialogue and healing. To understand The Walking Theatre Company first necessitates a journey with its founder, Sadie Dixon-Spain.

I met Dixon-Spain in Glasgow for coffee. She has the Celtic traits of feminine strength, fiery red hair, and an amazing ability to tell stories. With a wicked sense of humour she took me on a three-hour whistle-stop tour of her somewhat hectic, crazy, nomadic, but inspirational life that has shaped both her and The Walking Theatre Company. 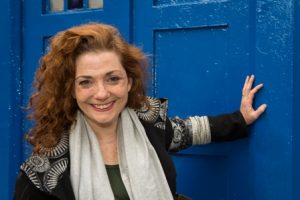 The eldest of three siblings, Dixon-Spain describes herself as an Anglo-Scot. Her mother’s family roots are in Ayrshire, Scotland and her father’s family are from County Durham, England. Out of a necessity to find work, her parents started their married life in London. Her father travelled for work frequently, and it was her mother, grandmother and great-grandmother who became the big influences in her life. She was born in Clapham, and her eighteen-year-old mother – determined to succeed on her own – auditioned successfully as one of Hugh Hefner’s original Bunny Croupiers, quickly becoming the fastest Blackjack dealer in London.

Dixon-Spain’s earliest foray into drama was as a tree in a school Christmas show. As one of the youngest children on stage, she was asked to stand still with her arms in the air. That was far too boring for the young actress, whose mother still recounts how the tree stroked every sheep that walked onto the stage.

During her formative years in Chiswick, London, she had a child minder – a transvestite known as Robert by day, and Roberta by night. She laughs raucously as she recalls,

“There were always lots of colourful costumes and clothes, and I remember spending lots of time dressing up.”

When she reached the age of five, the family began moving around the U.K. for work. By the time they returned to London eleven years later they had moved no less than sixteen times. It made Dixon-Spain aware of the world that lay beyond the city, “I came to appreciate how small I was in the vastness of big landscapes.” 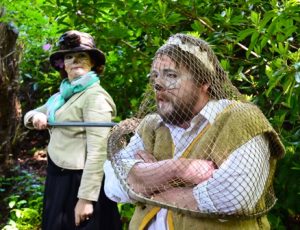 She acquired A-levels in English Literature, Classics and Religious Studies, but was determined to study drama. Her father didn’t approve, instead wanting her to pursue a career in law. After studying English and Dance in Chichester, she worked in cabaret, dance, and musical theatre, starring as Viola in Twelfth Night, before moving on to study drama at Mountview Academy of Theatre Arts in London. Her first role after Mountview was in Macbeth, where she starred as Lady Macbeth and the First Witch.

She also loves writing, but acknowledges that it brings specific challenges, “I’m dyslexic and I visualize things in 3D far better than any normal means of communication. My starting point with any writing is to ‘hear’ the characters and ‘see’ the setting.”

After a spell writing comedy and business-training scripts, alongside repertory theatre and television work, she met her husband Charles, whose family were farmers from Norfolk.

Together, the couple dabbled in property development in London, but soon realized they both missed the wild open spaces away from the city.

Her mother had returned to her homeland of Scotland years earlier, settling on the Island of Arran. During her visits north, Dixon-Spain felt a deep affinity for Scotland, “I missed the ever-changing landscapes and longed for that feeling of wonder at what may be around the next bend, over the hill, or in the forest. I wanted to come home.” In 2003, the couple bought the ruinous remains of Dunans Castle, in remote Glendaruel in Argyll and Bute, Scotland.

Immersing herself in the local community, Dixon-Spain was asked to create ‘something theatrical’ for a press event as part of a walking festival. She scripted a short piece in which the walkers would enter Puck’s Fairy Glen. “I was thirty weeks pregnant and played a very fat Titania.”

She gave birth to a daughter, and thirteen months later a second daughter arrived. Over the coming years, and while renovating the castle – an ongoing project – she entertained the girls with stories that involved exploring the landscape, “We knew that fairies lived by the stream and the black, plastic-wrapped bales of hay were dragon’s poop. That necessitated fairy and dragon-hunting expeditions. You’d be amazed at how many they saw!” In a rural environment with no theatre, this was the genesis of The Walking Theatre Company. 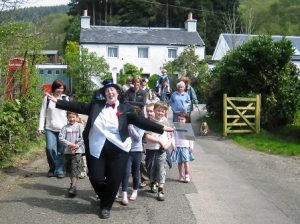 She scripted a local heritage piece and undertook community projects before Forestry Commission Scotland approached her to come up with ideas to encourage people to use the local community woodland. This resulted in both the Wonderland Adventure and The Whisky Walk. Layers of depth were added to the writing, and she drew in additional actors. The Whisky Walk asked the audience to engage with the actors in understanding whisky as an essential, economic commodity in deprived communities, educating them about the settlements in which they lived.

In 2009, The Walking Theatre Company was granted £3,000 from the Scottish development agency Firstport as a start-up social enterprise project. In the same year, Forestry Commission Scotland – in conjunction with the Royal Commission on Ancient and Historic Monuments of Scotland – commissioned Dixon-Spain to write and produce a piece of drama about the long-gone Wilsontown Ironworks in Lanarkshire, which – in its heyday in the late 1700s – employed 2,000 people. Today there is little to see of a vast complex that once dominated the countryside, but the fragmented communities that still remain bear witness to its demise. The resultant walking play permitted the audience to interact with characters from the past. It drew disparate communities together and helped people understand what had happened in the area, all the while affording them opportunities to meet and engage with each other. The project was a success and the following year Forestry Commission Scotland doubled Dixon-Spain’s commissions. As well, Historic Scotland commissioned three bilingual pieces in Gaelic and Scottish. With the help of two fluent Gaelic speakers she embarked upon writing plays that give the audience the opportunity to try their hand at Gaelic pronunciation.

Moving through a landscape that once resonated with the sound of the Gaelic tongue – and trying the words first hand ‘in their natural environment’ – created an immediate impact. Audience members could feel a connection with their ancestors.

Since 2009 The Walking Theatre Company has seen fantastic growth with projects for the National Trust for Scotland; educational drama for schools, community drop-in shows, site-specific historical plays, and murder mystery nights across the country. It now operates across the U.K. with a core of thirty Scottish actors and twelve English actors, all adept at playing varying roles. 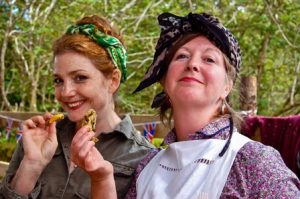 Dixon-Spain continues to act and write. New commissions include ‘A Town We Made’ – a play about the development of Inveraray as a new town in the 18th century, and ‘The Resurrection’ – a ghostly drama set on the banks of the Union Canal taking brave audiences back in time to meet victims of the notorious murderers William Burke and William Hare. On the environmental side ‘Two Thirds Fish’ explores the herring industry along the shores of Loch Fyne and its impact on the local economy.

The Walking Theatre Company plays an important role in education and in getting people to explore and understand the environment in which they live, work and play. Its unique approach to interactive and site-responsive theatre is both a product of Dixon-Spain’s personal life journey and her passion for drama and Scotland.