Each of the modern-day Celtic lands has a coastline and a special relationship with the sea that, in many ways, defines them. Over the centuries, the ocean has been an important source of food and a means of travel. It has both separated and united seafaring Celtic peoples, and has been the inspiration for many aspects of Celtic culture. It has shaped our history, and we ignore its importance at our peril.

It was a warm sunny day when I visited the picturesque harbour at the historic heart of North Berwick. Here, on Scotland’s east coast by the southern approach to the Firth of Forth, I inhaled the delicious aroma of cooked lobster as it drifted over the small fishing boats bobbing in their sheltered haven. The Lobster Shack was doing brisk business. Its offerings of fresh langoustine, crab, mussels and line-caught mackerel served on the quayside, typified a Celtic nation’s relationship with the sea. 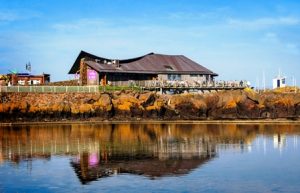 A harbour seal surfaced between the boats and it eyed me quizzically before sliding back into the depths. A few miles offshore lay the craggy outcrop of the Bass Rock that I had visited on numerous occasions to photograph the world’s largest colony of northern gannets. Standing by the harbour wall, picking the succulent flesh from my takeaway lobster, the relationship between man and the ecology of this coastal environment was apparent all around me. It was a fitting place to find the Scottish Seabird Centre and learn about why it came to be here along with its plans to become Scotland’s National Marine Centre.

North Berwick was granted Royal Burgh status in 1373. It was a small ferry port in Medieval times, and over the subsequent centuries became an important fishing port. Like many small towns around the country, North Berwick benefited from the arrival of the railway in 1849, and around that time, the creation of an open-air seawater swimming pool that now sits alongside the Scottish Seabird Centre. By the early 1900s, summer visitors flocked to the quaint historic town with its bracing sea air, and for many years North Berwick flourished. Over the decades following WWII disposable income increased for many, and cheap foreign travel became a reality. The nature of tourism changed, and with it so did the good fortune of North Berwick. By the late 1980s North Berwick was at its lowest ebb.

It was then that a local businessman – community councillor and keen ornithologist Bill Gardner – had an inspired idea. Gardner understood the international importance of the Bass Rock and its gannet colony, and he was also aware of the existence of remote camera technology that could permit viewing of the birds from the shore. 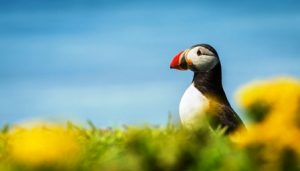 Following years of hard work and determination, the Scottish Seabird Centre opened its doors to the public in 2000. The facility is a registered charity and is one of the world leaders in remote wildlife viewing. It started with two cameras on the Bass Rock, and one on the island of Fidra. This was followed with cameras on the Isle of May Nature Reserve, relaying images and sound from both the grey seal colony during the winter pupping season and from the breeding puffins in summer. From these humble beginnings, the Centre grew into a venue that now attracts over 270,000 visitors each year.

Chief Executive Tom Brock is aware of the important role that the centre plays, and also the need for diversification.

“We are a conservation and education charity, and all income is reinvested in this focus. So, for example, we lead and collaborate on conservation projects such as SOS Puffin, and also engage around 4,000 school children a year through pre-booked educational visits.

“We understand that seabirds are part of a complex ecosystem, and they should be researched and appreciated within the wider marine environment.”

“This is part of our rationale for evolving into the National Marine Centre.” 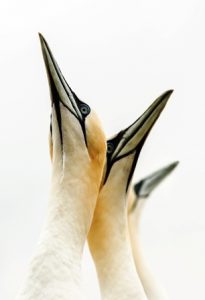 The National Marine Centre is a £5.7M project that will build upon the success of the existing facility, and is destined to become Scotland’s leading marine science visitor attraction. Through expansion and alterations to the existing Centre, the new building will provide much needed additional space and unique facilities designed to engage, excite and inspire audiences of all ages. It will be a hub for education, conservation and research-based activities that, according to Brock, will “build environmental citizenship that will help in the vital work of protecting and conserving our marine heritage for future generations.”

The National Marine Centre’s foundation is the valuable legislation and work of the Scottish Government, that has shown a commitment to the protection of the important, yet often fragile, marine environment around Scotland’s shores. The 2015 National Marine Plan promotes both the sustainable development of marine environments and the sustainable use of their resources within the country’s inshore and offshore waters. The Scottish Government has also created several Marine Protected Areas in order to safeguard some of the most iconic and endangered habitats and species.

Professor John Baxteris the Head of the Scottish Seabird Centre’s Marine Advisory Group, as well as Principal Advisor for Marine at Scottish Natural Heritage. He is only too aware that our seas are often low on the priority list when it comes down to the environmental concerns of the general public – believing it is often a case of ‘out of sight – out of mind’. But with amazing habitats that support over 5,000 species of invertebrates and plants along with a vast array of birds, fishes and marine mammals, Baxter knows the pressures that are being placed upon these ecosystems.

“The marine environment of Scotland supports a fantastic array of habitats and species.”

“However, it faces a growing number of pressures such as climate change, ocean acidification, pollution, and invasive species, as well as challenges such as the sustainable exploitation of living resources and the potential consequences of offshore renewable energy developments which are as yet not quantified.” 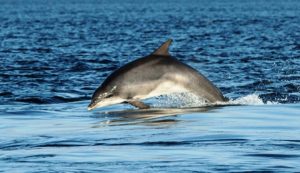 Baxter is passionate about the sea and the incredible variety of life that it supports, but he also understands the need to find the right balance between man and the sea.

“There is increasing pressure on the marine environment due to reliance on seas for food, transport and energy.”

Education lies at the heart of the National Marine Centre project. The current arrangements with schools will be expanded to create an outreach program to engage with institutions all across Scotland. The focus of the Centre’s current exhibitions will diversify to interpret, explore and share more widely the marine environment and marine wildlife – above and below the waves – with interactive exhibits.

Partnerships are planned with area organizations, including universities, to share aspects of local, national and international research.

To date there has been development funding of £290,000 awarded by the Heritage Lottery Fund, and a further £3.5M is ring-fenced for the cost of the building works. There has also been support from East Lothian Council. The full project team, including architects, has now been appointed, and the final challenge is to raise the remaining £2M that will bring the plans to life. 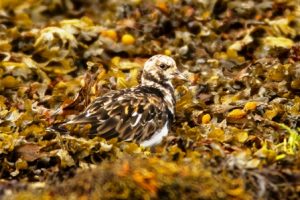 I breathed the sea air by the swimming pool that had once made North Berwick a special place for visitors, and I looked up at the Scottish Seabird Centre and out to the Bass Rock with its white encrusted cap comprised of thousands upon thousands of birds. I could only see a fraction of the incredible marine environment encompassed by the blue sea in front of me. Through the vision of Bill Gardner, and the many that have made his dream a reality over the ensuing years, it seems that North Berwick may once again become a place to take a very special dip into Scotland’s seas. ~ Tom Langlands