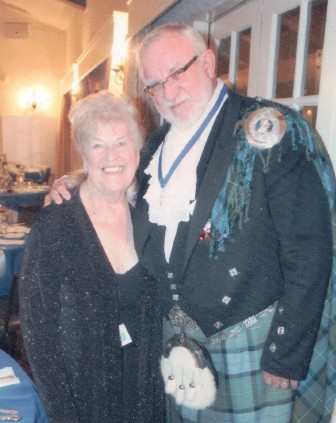 The weather is expected to be perfect for this weekend’s Seaside Highland Games in Ventura, California. Event spokesperson Nellie Graham Lowry shares the details.

What are your own roots?
My mother always told me I was “English, Irish, Scotch and Dutch!” I have since learned that the Dutch was really German. My Scottish roots were from Paisley, immigrated to Ontario, Canada about 1830, and then my grandparents in 1903 married and moved to Michigan. My husband John’s ancestors immigrated to the Atlantic shores before the American Revolutionary War.

When and why did you get involved with this event?
John and I have been attending Highland Games for the last 30 years. We started first with watching the athletic competition and then got involved with the Clan area. I am a Graham and John is a Gordon and MacLaren. A dozen years ago, several Scots that lived in the northern area of Los Angeles urged John to start a Scottish festival in the area. We live in the San Fernando Valley and it is too hot during the summer time for a festival here and we did not find a suitable venue. But 50 miles away at the Pacific Coast in Ventura we found a wonderful venue….it is the Ventura County Fairgrounds.  We tried to incorporate all the good things of the Scottish Games that we had attended across the country and avoid the pitfalls that we had seen.

What are the challenges of being involved?
Time is the largest concern with being involved. With the clans it was choosing what you were able to do for the Clans. We hosted many of the Gordon tents at various games in California. John has been President of House of Gordon USA and also national treasurer for Clan MacLaren. I became involved as the Genealogist for Clan Graham. John spends most of the year working on the upcoming festival. I tend to do the organization management via the computer.

What are the rewards?
The rewards are many…with the clans it was helping someone find their clan and enjoying the new feeling of “family”. Helping others find and become aware of their cultural heritage is very rewarding! We have a large Children’s Glen at Seaside and have them involved in throwing the caber and stone (size appropriate to their age) as well as other cultural events, including wool making and weaving, with the sheep included!

Why is it an important event for the community there?
We have found that Scots will travel quite a distance to attend a Games and to be together for the weekend but to pay the bills of a Scottish Festival we need the Community support. In Ventura we have that support….we joined the Ventura Chamber of Commerce to get the word out, as well as the local Visitor’s Bureaus.   With printed and online publicity, using social media, etc. we fill five local hotels for the weekend as well as many enjoying meals in the Ventura restaurants….definitely a boom for the local economy.

What can attendees expect this year?

We started right off with a two day Games ten years ago, actually we begin on Friday evening at one of our host hotels…a Single Malt Whisky Tasting and “A Scottish Evening”…an idea we got while attending a Games in Scotland.  “A Scottish Evening” includes a buffet supper, live music and a Scottish fashion show. Our plan was only to do this the first year but it has become the highlight of the weekend with 350 guests attending. We have all of the events of a Highland Games ….competitions in dance, athletics, piping and drumming, drum major, fiddle, darts and more.  Last year Clan Currie inaugurated a Harp Glen with a harp petting zoo….lots of excitement here. Three musical stages to highlight Celtic rock, including our local Celtic Spring Band, a family of fiddlers, Irish dancers and all. We have sheep dog demonstrations, Haggis tossing, and our Gordon Highlanders – Bydand Forever with their gatlin gun! Classes in speaking Gaelic and researching your genealogy! With our clan background, the Clans are the backbone of our festival with 80 clans and societies lining our Clan Row. Clan Innes and Clan Grant are holding their AGMs this year with Clan Rose bringing their newly appointed Chief David from Scotland to be our honored guest and they will host a Gala Dinner on Saturday night for all to meet their new Chief. We also are having our first Golf Tournaments on Thursday this year, extending the weekend!

How else are you involved with the Celtic community there?
We have been actively involved with the St Andrew’s Society of Los Angeles for many years, John serving as President of that organization in the past. We continue to be active with Clan Gordon and Clan Graham.

Are we doing enough to preserve and promote Celtic culture generally?
We are trying, that is actually the mission of the Seaside Highland Games….we want the next generation to realize the rich heritage of their Celtic roots.

What can we be doing better?
We need to do more promotion….but that cost dollars and as a non-profit we don’t have lots of extra dollars for publicity. We enjoy granting scholarships with all of our extra dollars, encouraging our youth in their study of the Scottish arts.

What does the future look like for the Games?
The future of the Seaside Highland Games is excellent…only 10 years old, it is totally run by volunteers – something the business community doesn’t understand. We are located on the coast of the Pacific Ocean with cool breezes, which is especially enjoyed by the Scots in all of their wool regalia! We are planning for the future by establishing an Endowment fund to continue the Games and perhaps in the future we will need to be able to supply the organizers with some funding….but at present our hats are off to our great volunteers.