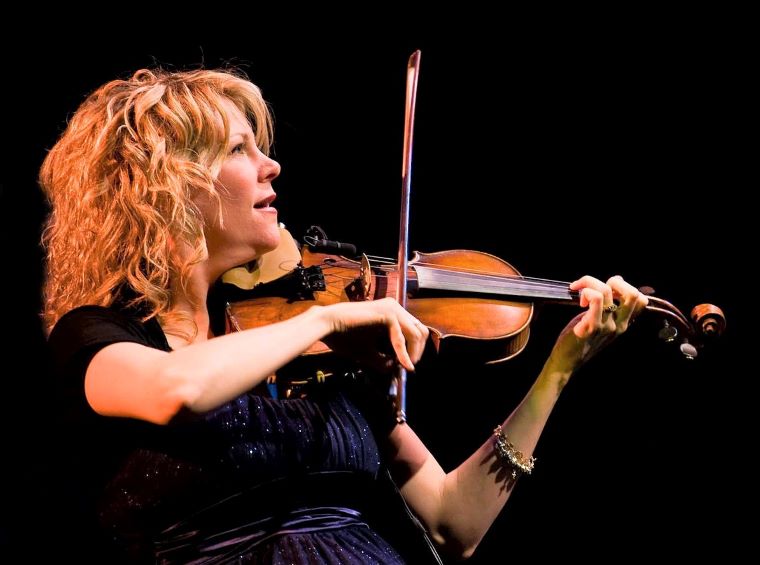 American author, artist and educator Paul Laseau once said that “sketching is a continuous form of learning rather than a string of performances.” That is certainly true for fiddler Natalie MacMaster. Recently, we caught up with the multi award-winning musician to chat about her latest effort, Sketches, and the perks and perils of her profession.

Where are you and the family hanging out these days?
We are in Ontario. Just outside of Peterborough, in a little farming village called Douro.

Let’s start with your roots.
I grew up in Troy, Cape Breton. My family is of Scottish ancestry – both my Mom and Dad are 4th or 5th generation Scottish, so we have been in Canada for a long time. The music that I play is originally from Scotland, but with what we call the ‘Cape Breton’ sound. It is similar to traditional, old-school Scottish fiddling – interestingly, a style of music that you don’t hear anymore in Scotland – but with a touch of both Irish and French influence. I grew up surrounded by that sound. I spent 18 years there, until I went to college. After college, I moved to Halifax, Nova Scotia for a while, before coming to Ontario in 2002.

You began playing and writing music at a very young age.
I have been playing music for 37 years now. I was given a fiddle from a relative, Uncle Charlie, who was actually my great uncle and lived in Boston. He sent a fiddle to Cape Breton for any of the MacMaster children who wanted to give it a go. I heard about the fiddle, and I wanted to play it. It wasn’t for me specifically, but once I knew it was on its way I was like, ‘I’d like to try it!’ It was small, sort of a three-quarter size violin – just a bit smaller than a regular one. In our house, we already had a full-sized fiddle, but as a child it just didn’t fit me. I have been writing music for 37 years as well. I wrote my first tune when I was about 10 years old, and I still remember it; it is called, amazingly enough, Uncle Charlie’s Fiddle. I haven’t written a pile of tunes over the years – maybe a hundred or so. As I have gotten older, however, I have become more interested and involved with song writing.

You were raised in a musical milieu.
Yes, both my Mom and Dad had that musical gene. Mom step danced – that is what she was known for. And I suppose Dad was best known for being Buddy McMaster’s brother – Buddy being probably the most famous of the Cape Breton fiddlers – though Dad didn’t play much himself. However, at our home people would just drop in at all hours and there would always be a fiddle tune playing. And we had some serious house parties – sometimes with up to a hundred people! So, there was music on the go at our place most of the time.

There were other musical influences as well.
Eileen Ivers was probably my favourite, especially during my years in Cape Breton. I first heard her play when I was a teenager. She was a big influence because I heard so many different sounds and songs come from her fiddle. Plus, she was young and played solo, so that got me thinking that I could do that also. When I was a little older, I heard Mark O’Conner and he became a major influence as well, especially in terms of how I held my fiddle. The tone that he was able to produce, especially his vibrato, I simply could not replicate with the way I was holding my fiddle. I had been holding it in the ‘correct’ manner and – up until that point – didn’t see any reason to change it. But after hearing him play, I relearned how to hold the instrument so that my hand would be in the proper position to produce a better vibrato.

What inspires you musically today?
Good music. It can be anything; jazz, pop, rock, whatever – it doesn’t necessarily have to be other fiddlers. I often find inspiration in little tunes of different genres – perhaps the melody will cause me to hum other melodies around it, and then I end up writing something. Or it could be just the sheer beauty of how a melody is played that inspires how I deliver a piece of music.

You have enjoyed a brilliant career.
Many of my career highlights happened when I was in my 20s; a major record label deal with Warner Music Canada, attending the Juno Awards and winning a Juno. An incredible milestone for me was appearing on Sesame Street – that was an awesome moment, really. Recording with Alison Krauss and Malcolm McDonald were amazing experiences, as were playing at Carnegie Hall and the Hollywood Bowl. Too many to count really – I have been very fortunate.

It’s been eight years since you released your last solo album. Why the gap?
I have done a lot of recording over the last eight years, but it has all been with my husband Donnell (Leahy). We had been married for about 15 years before we did our first duet album, which is crazy and ridiculous considering how long we had been together at that point. Then we did a Christmas album. Lately there has been a different focus for me and, to be honest, I find myself a little divided. At one time my only concern was for my own solo career. Today, it is about my own career, but it is also my career with my husband…our career…as a team. And, even more than that, it is now about me, my husband and our children as a team. Then, I have my role as a mom, watching over my children and their development, so I am home a lot of the time. On top of all that, we run a farming operation as well. So, I wear many different hats. I mean, even something as basic as clothing – it seems so trivial in some regards, but it is a vital component of what we do. It used to be that I only had to dress myself for the stage and for public appearances. Now, I am dressing myself, I am advising my husband, and I am dressing seven kids for performances. It is a lot of people, and a lot of things to manage. Don’t get me wrong; I am not complaining, and I wouldn’t trade what I have today for anything in the world. I am happy and content, but I have been busy. Does that answer the question?

When did you find time to write and record the new album?
Let me just put it this way: working on a solo project – going into the studio – was a break from life. And it was awesome! People think, ‘oh, there is so much work involved preparing for a recording.’ Listen – for me, it was a much-needed departure from work. Homeschooling seven kids who play five instruments – that is work. I actually started this album about five years ago, but because I have been so busy with other commitments, I had no idea how and when it would happen. But when I decided to finally do it – I suppose back in January – it meant carefully carving out a couple of hours each day, four or five days a week, just for me. No interruptions, no nothing. And that, in and of itself, was just as good as a day at the spa.

What was your creative process like for Sketches?
On my iPhone I have a voice memo list of probably 2,000 bits of my own voice, and I am always on there, recording pieces of melody ideas. Most of those were likely inspired by things that have happened over the last five years. So, I went back to those, and some of the ideas for the new album came from those moments – moments that were very organic and that I had documented. I pulled some of these bits out of the archives and found myself re-motivated. Other songs on the new recording were reworkings of these great traditional tunes that I had documented as well, combined with a few of my own ideas. And then some stuff was just me thinking, ‘Oh, I need a number like this,’ or, ‘I need a medley that, you know, has more of a mood to it,’ or ‘I need a tune that’s really fiery.’ Sometimes that would mean digging into my own databank of tunes – hundreds, even thousands of old songs that I have learned over the years. I did most of that stuff on my own, but Tim Edey (English multi-instrumentalist and composer) came over for two days before we went into the studio and, even though he had no knowledge of what I was going to play, we somehow put it all together. I think I had 20 pieces of music that I shared with him, and I ended up keeping the best twelve.

What’s next on your musical agenda?
I am always excited by the future of music. I can scarcely remember any time when I have been musically tapped-out, you know? It’s just so damn exciting. I am very motivated by creating music, by listening to music, by digging up old pieces, by taking little turnarounds. So, that said, I have just finished a little run of shows here in Canada, and I have been writing a book. I guess I haven’t told anyone about that yet. I’m working on it, my husband’s working on it…more will be revealed. My husband is working on a solo recording as well. Our plan was to get both solo projects released this past year, but he will probably only begin recording his early in the new year. And he and I will be recording together again sometime soon as well, with the goal of having that out later in 2020. So, good times, but very busy times!