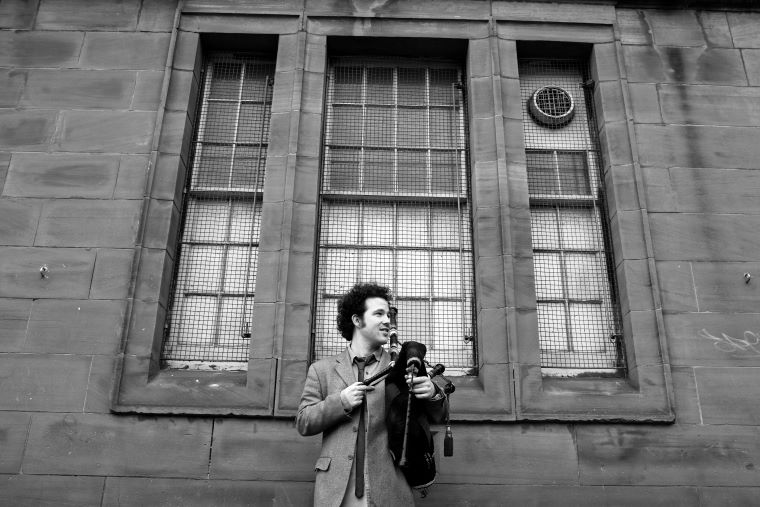 Even before his family relocated to Scotland, Calum MacCrimmon was immersed in Scottish culture as a youngster.

“I was born in Regina, Saskatchewan but grew up mainly in Edmonton, Alberta until I was about 9 years old,” shares the 37-year-old via email from his home in Glasgow. “I have been based in Scotland since 1991 when my family moved over from Edmonton.

“My dad and grandpa both played the pipes,” he continues. “I was surrounded by piping and pipe bands from an early age. I started piping in Canada, and my first lessons were with a local Pipe Major – and family friend – Arnie Stone in Edmonton. After moving to Scotland, I started taking lessons through the City of Dundee Pipe Band.”

MacCrimmon drew inspiration from the traditional sounds of his surroundings, and still pays homage to those roots by using his late grandfather Malcolm’s set of pipes to this day. He is not beholden to the letter of tradition, however, allowing himself to draw upon other, more contemporary sources.

“I am not sure if the greater piping community would see me as a traditionalist or some sort of outsider,” he admits. “Perhaps I am a bit of both. I certainly enjoy the classic Scottish repertoire as well as sourcing rarer tunes from the old collections.

“In stark contrast to this, I find great fulfillment writing and singing funk and country songs in a band called Man’s Ruin. I am always looking for new influences to incorporate into my own playing. Jamming along to a steady groove is still quite unique in piping and is now found mostly in the folk music scene. Playing alongside the guitar and bass for years has allowed me to feel more comfortable with this kind of approach.

“I guess that I am a bit of a mixed bag…Mixed Bag! There’s the title for my next solo piping album!”

Like all artists, MacCrimmon – today a proud core member of world-renowned Scottish folk troupe Breabach – finds joy in creating something new from scratch. But even more so, he appreciates the way those creations can bring him closer with others.

“I love the social aspect of a musical lifestyle – this is probably why I have prioritized performing for so long. It started with pipe bands before I migrated to the folk scene, and I have been playing in folk bands professionally for about 15 years now.

“It is also very rewarding to play the pipes for an important event, and marking an occasion with music. These experiences always remind me that the pipes are a highly emotional instrument, and that people can be quite moved when a tune is being performed at a wedding, a funeral, or some other significant gathering.”

Even his career highlights are less about the personal achievements of his professional craft, and more about the experiences that he has had with his bands along the way.

“There have been so many wonderful tours, energized festivals and charming gigs over the years. Perhaps a general highlight for me has been being able to visit different parts of the world. Over the last half-decade, especially, we have performed in Australia, New Zealand, South Korea, Qatar, Norway, Sweden and many other amazing places. Quite often, we are invited to take part in a folk music event which allows us to meet new friends as well as experiencing authentic traditional music and culture from these countries.”

MacCrimmon is optimistic about the future of piping, believing that it has never been in a better place generally.

“I am proud to see how well supported it is today from many angles, including the competitive piping scene, the teaching institutions, the avenues of folk music, education and, of course, all of the great parents,” he says, adding, “thanks Mom and Dad!”

As for the future, he jokes “2020 sounds like a date out of some post-apocalyptic, dystopian novel. Having said that, I am hoping to buy a house next year with my wife, work on a second solo album – possibly of songs rather than pipe tunes – and I am confident that Breabach will be stirring up some sort new project or album next year, so keep your ears to the ground!”