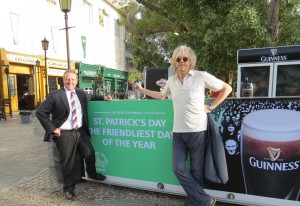 St. Patrick’s Day celebrations at Dubai’s Irish Village have become so popular the party now runs a full week. What’s more, for each of the past six years, Ireland’s famous son Sir Bob Geldof has flown into the United Arab Emirates to start the fun.

Created in the mid-1990s to cater for fans of the Dubai Tennis Championships, the Irish Village allows guests to enjoy traditional Irish food and music inside a traditional wooden pub or outside on a wide terrace overlooking lovely gardens.

The development was dreamed up by Colm McLoughlin, Executive Vice Chairman of Dubai Duty Free, and was supported by H.H. Sheikh Ahmed Bin Saeed Al Maktoum.

From the start, the duo prioritized authenticity and the Village was designed by McNally Design of Dublin, using Irish craftsmanship and materials, which were shipped toDubaiand reassembled on site.

“Even the paving stones came all the way from Liscannor inCounty Clareo n the west coast of Ireland,” explains Dave Cattanach, Food and Beverage Manager. “All props and décor items, from the telephone box down to the shop windows’ bric-a-brac, are genuine Irish pieces.”

The Village opened in the fall of 1996 with a full complement of Irish staff. Over the years, the terrace has been extended and now holds 3,500 people who frequently enjoy performances by the likes of U2, Finbar Fury, The Commitments, ASLAN, The Saw Doctors and comic Dara O’Briain.

Music’s importance is demonstrated by the life-size bronze sculpture on the terrace, which depicts three traditional Irish musicians. Entitled The Session, the sculpture was created by Irish artist Austin McQuinn.

Dubai is a cosmopolitan city and, for the large Celtic community, the Irish Village is an oasis in a place where summer temperatures often reach a humid 42 degrees Celsius.

“The Celts consider The Irish Village home,” says Cattanach, “They enjoy the atmosphere, the live music, the pub food, the ales and stouts.”

“Our clients are mainly Dubai residents and they’re all nationalities with a higher percentage of British, Irish, and South African,” Cattanach explains.

“Arab expatriates, such as Lebanese, Jordanians and Egyptians, are another big group. We also attract tourists who visit The Irish Village as a landmark on the old side of Dubai.”

This July, the Village celebrated its eighth Hopfest. Party-goers enjoyed more than 100 ales, beers and stouts in a final three-day party before Ramadan, Islam’s month-long period of fasting. Party-goers were undeterred by outside temperatures reaching 45 degrees Celsius.

“The Hopfest tent was really cool with icy air blowing from the Fosters’ fridges,” says Cattanach with a smile.