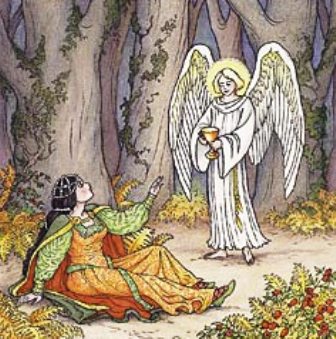 Dydd Santes Dwynwen is the Welsh equivalent to Valentine’s Day and is celebrated on 25th January every year.

The legend of Dwynwen is a very sad one. She was a beautiful Celtic princess, the prettiest of all the King of Wales’s 24 daughters (Brychan Brycheiniog of Brechon also had 11 sons!) who lived during the 5th century.

Dwynwen was in deeply in love with the handsome Maelon Dafodrill, but her father had already betrothed her to another, so he refused to give them his consent. On finding out, Maelon cruelly forced himself upon her and fled. With a broken heart, and grieved to have upset her father, Dwynwen ran to the woods and begged God to make her forget her love for Maelon.

Exhausted and aungished, Dwynwen eventually fell asleep. Whilst dreaming, an angel visited her and left a sweet smelling potion. This would erase all memories of Maelon, and his callous heart would also be cooled, but so much so that he turned to ice. Dwynwen was horrified to find her love frozen solid. She prayed again to God, who answered her prayers by granting her three wishes.

Her first wish was to have Maelon thawed and for him to forget her; her second, to have God look kindly on the hopes and dreams of true lovers whilst mending the broken hearts of the spurned; and her third was for her to never marry, but to devote the remainder of her life to God, as thanks for saving Maelon.

Dwynwen later became a nun and settled on Ynys Llanddwyn – a small island off the west coast of Anglesey in north Wales. She found a church there, remains of which can still be seen today. After her death she was declared the Welsh Patron Saint of Lovers and ever since, Welsh lovers have looked to St Dwynwen for her help in courting their true love, or for forgetting a false one.

Her most well known saying is “Nothing wins hearts like cheerfulness”