If all the world’s a stage, then a whole new world of possibilities is opening up for the students and faculty of The College of Piping and Celtic Performing Arts in Summerside, Prince Edward Island.

James MacHattie, the college’s director of education, says that the school has been teaching the Celtic performing arts like piping, drumming, and highland dancing for nearly 30 years.

“And we have just introduced fiddle to our program offerings this year,” he adds.

Imparting those skills is the college’s primary mission – that’s why the college has maintained a tuition that is affordable to students from around the world.

“Like most piping institutions, we are an educational facility, and it is often difficult to make ends meet through tuition alone,” says MacHattie, noting that public and private support alone doesn’t cover all the bills. “To supplement that, we have traditionally staged a production called Highland Storm each summer.” 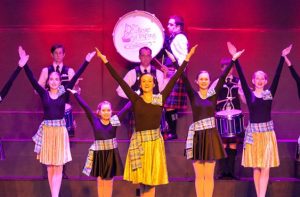 Highland Storm is a popular event for the school and the community and does help bridge the financial gaps. However, for years the school has been limited by their venue.

“Our old stage was an outdoor theatre that we had to put up every year. We could only use it in the summer months.”

On top of that, use of the stage was subject to the elements; bad weather sometimes forced the cancellation of a show. Even the quality of the performances – designed to give students an opportunity to develop hands-on skills and stage presence – might suffer from exposure.

“We always had to tune up in a little shed in the back, and if the temperature dropped, the pitch of the pipes changed,” explains MacHattie, “nevermind the damn mosquitos!”

An enclosed facility for stage performances has long been on the college’s wish list. Thanks to generous grants awarded by Heritage Canada and the Atlantic Canada Opportunities Agency, that wish is about to become a reality.

The final touches on their brand new, state-of-the-art indoor theatre facility – The Celtic Performing Arts Centre – are just being completed, in advance of the facility’s grand opening in July.

“We will have total control,” says MacHattie. “There are greater opportunities for lighting displays – we have a projector now, so we can have all sorts of textures and colours – and even the bagpipes are going to work and sound better in the new facility.”

July’s grand opening will feature a newly-revamped version of their annual summer show, “Great Scot!” The production will be managed by acclaimed, multiple-award-winning director Sheila O’Brien.

The boon to the college – and indeed, the community – goes beyond optimizing the summer show.

For that, MacHattie explains, they needed some expertise.

“I teach bagpipes. I don’t know a thing about running a theatre.” 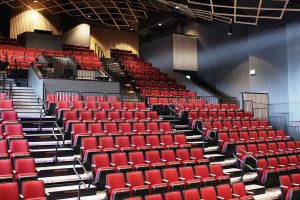 Enter Jennifer Campbell, the college’s new executive director. She was brought in due to her extensive experience and connections in the Atlantic Canadian music scene.

“One of the reasons I was hired on is to make sure that the theatre is used, and that it is bringing in steady revenue for the college,” says Campbell, who has worked for the East Coast Music Association and the Small Halls Festival. “I am no stranger to programming shows, in all areas of the island, with all genres of music.”

While the primary users of the 300-seat theatre will be students, Campbell will help oversee partnerships with other cultural bodies in Summerside, across the province, as well as acts from afar. With a dance hall, meeting areas, and even a basement recording studio, there are plenty of potential uses for the new space.

“We are going to be programming anything and everything we think that Summerside should hear,” she continues. “We want something happening every single day, in every single one of the different spaces that we offer.”

“As one of our benefactors has called it, we are entering College 3.0,” adds MacHattie, who says the new venue will help keep tuition affordable.

“Our mission statement remains education-based, but we are also going to be producing our own shows. With a theatre that is going to be used for all sorts of fundraising events, we are now entering a very new stage.”