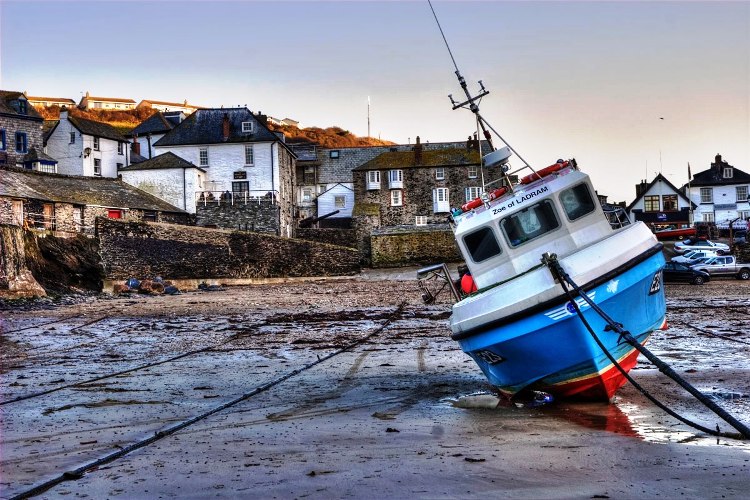 Shaken from my slumber while dozing in the schoolhouse featured on the popular British comedy-drama series, Doc Martin, I half expected to see Martin’s estranged wife – teacher Louisa Ellingham – peering sternly over me as I cleared the cobwebs from my eyes. But no, it was my not-so-estranged wife, Lori, urging me awake to take in the beautifully sunlit Port Isaac harbor from our second floor bedroom window.

The Doc Martin schoolhouse in fictional Port Wenn had been converted to the twelve room Old Schoolhouse Hotel & Restaurant. With rooms named after various school subjects, we were lodged in the spacious English bedroom, with glorious views of the Port Isaac village and seafront, which serves as the setting for the long-running TV show.

The Doc Martin series, of which we are avid fans, had given us a glimpse – albeit with a bit of fantasy – of daily life in this idyllic, picturesque fishing village along the northern coast of Cornwall. Even so, spending a few nights here, including frequent extended gazes across the harbour from our unique perch, over to Fern Cottage – the two story brick house used for Doc Martin’s surgery – gave the experience a whole new meaning. 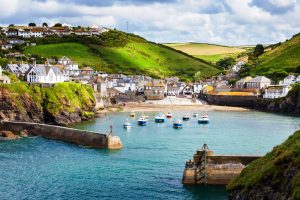 Approaching Port Isaac the day before, we kept an eye out for the castle in Tintagel, a few miles to the north. Legend has it that King Arthur was born, or at least conceived, there. Spotting a likely structure high on a prominent bluff overlooking the sea, we parked in town and walked the half mile to the entrance, only to discover that the stately building was not the ancient castle, but the Camelot Castle Hotel. Nonetheless, with the unobstructed 360-degree views from the hotel looking down over Barras Head, we were able to observe the ancient Tintagel Castle ruins down below.

Winded from the uphill climb to the hotel, we opted for a relaxing afternoon tea in the lounge, while contemplating the far reaching view from the window. The visit proved fortuitous as it turns out, since the hotel itself had been featured in the opening episode of Doc Martin, where the Doc first interviewed for the post as Port Wenn’s sole general practitioner.

Fans will recall that Martin had been a successful surgeon in London, but was forced to give that up when he developed a severe fear of blood. Though possessing extraordinary medical acumen, Martin was remarkably lacking in social skills, leading to some heroic, yet painfully hilarious situations. Hence, the first episode was titled Going Bodmin, implying a person who is somewhere between wandering adrift and going a bit mad. (Bodmin was a Cornish asylum in the nineteenth century).

The Camelot Castle Hotel appeared several times again, most notably in the fifth season, when Doc Martin’s baby son was kidnapped by the quirky pharmacist, Mrs. Tishell, who had a not so secret unrequited romantic obsession for Martin. The Doc and Louisa frantically searched the hotel, disrupting a wedding reception in the process, before discovering that Mrs. Tishell had fled to a different “castle.”

Chuckling over these show memories, we looked the hotel over one more time and then proceeded on to Port Isaac and the Old Schoolhouse. I was glad the route brought us in by the backside of the village, since navigating the narrow and congested lane through the tiny seafront center of town appeared doable only for a seasoned villager.

The compact feel of the village took on inescapable immediacy for us anyway, as we drove into the Hotel’s minuscule parking lot. Seen as a playground on the TV program, the lot’s few densely jammed-in parking spaces were all occupied on this sunny afternoon.

While I contemplated the prospect of the nearest public parking a half mile outside of the village, Lori noticed a small sign on the side of the Hotel: more parking in rear. Our spirits were lifted momentarily. That is, until we pulled close to the driveway that led to the back. Though our rental car was fairly compact to start with, the clearance on each side, between the Hotel wall and the opposite stone-wall fence, was mere inches. Not much room for error. Nonetheless, I inched along the tight passage, grimacing at the thought of the inevitable scrapes on the car’s sides that were sure to come. 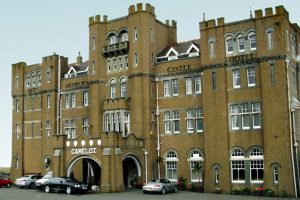 Just then, a hotel guest, enjoying a drink on the patio with her companion, observed our plight and jumped up to direct us through the narrows. After an agonizingly slow movement we thought would never end, we finally reached the back unscathed, and were rewarded with several available parking spaces. Not everyone had been so lucky.

The car next to ours displayed a freshly incurred gash along its midsection.

Promising the helpful guest a drink, Lori and I proceeded to reception, in dire need of a drink ourselves. A few minutes later, check-in complete and Guinness pint in hand, we retreated to the comfy sofa in the English bedroom, content to absorb the peaceful ambiance of the picture-postcard panorama before us.

Later, refreshed by the serene surroundings, we ventured out on foot to explore the village. As expected, the walk from the school house through the village and up to Fern Cottage took but a few short minutes. The effectiveness of the filming technique achieved in the show was apparent. Before long, a feeling grew within us that we were no longer in Port Isaac, but had stepped into Port Wenn.

That intimacy with the Port Wenn spirit was put in perspective the next day by the contemporary realities of Port Isaac. Eager to experience what living in this captivating village was really like, we joined life-long native, John Brown, for a walking tour.

John and his brother Jeremy come from a long line of local fisherman. Jeremy still goes out fishing for lobster and crab, which are sold in the family business, Just Shellfish, on the waterfront. After the tour, we stopped for some delicious fresh crab sandwiches at The Mote, a friendly restaurant just down the street.

John spent over an hour showing us all the Doc Martin filming locations in the village. Our fantasy was initially broken to learn that Doc Martin’s Surgery (Fern Cottage), and Bert Large’s restaurant, a large white edifice dramatically perched on a ledge above the beach, were actually vacation homes or rentals. However, the most surprising discovery was that Mrs. Tishell’s pharmacy is actually a candy store. A complete makeover and rearranging of furnishings transformed the cute little storefront. Show aficionados will enjoy a subtle clue to Mrs. Tishell, even in the real life rendition of the shop. Up on the storefront facade is a wooden ship figurehead of Lord Nelson wearing a neck-support. On the show, Mrs. Tishell wears a neck-support to protect her Torticollis (twisted neck syndrome).

During the walk, we queried John about the current state of the fishing business, including the Brexit matter. John had plenty to say about that. For his family and fellow fisherman, the European Union had been devastating. The extensive breadth of the English coastline had given fisherman a wealth of fishing rights prior to Britain’s joining the EU. Once part of the EU, the rights allocated to England were a small fraction of the original extent. Consequently, much of the fishing industry dried up for the British. Therefore, John and his family were in favour of leaving the EU. 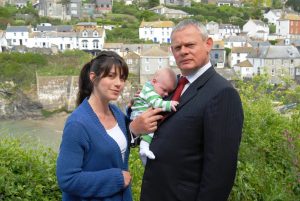 Upon completing the Port Isaac walking tour and lunch, we spent the afternoon exploring the village’s back alleyways and harbour on our own. At the waterfront, Doc Martin had been seen on occasion racing across the sandy beach to administer emergency treatment to a local suffering from some unfortunate mishap. Now, with the tide at its lowest ebb, the few fishing boats that had not gone to sea that day sat high and dry on the exposed seabed. Walking out along the rocky edge, we even came upon a spooky looking sea cave that no doubt was used by smugglers in earlier times.

On our final morning, we lingered over breakfast in the hotel dining room, most likely a converted classroom. The meals here had been delicious, including this day’s full Cornish breakfast of eggs, bacon, sausage, mushrooms, stewed tomatoes, toast, and of course, a generous helping of baked beans.

John Brown had mentioned that he actually attended school here when he was a boy. But now, though exterior shots for the TV show are taken here, the interior schoolroom scenes are filmed in a similar, currently active school a few miles away in Delabole. As a matter of fact, interior settings of the Doc’s surgery, as well as many others are taped in a converted barn up above the village at Roscarrock Farm, whose manor house coincidentally served as Nampara, the home of Ross Poldark from the Poldark TV series.

We reluctantly bid farewell to Port Isaac and the world of Doc Martin. Back home watching reruns, while anxiously anticipating the new upcoming season of the show, our viewing took on a new meaning. We forevermore felt like we were walking the very streets and backroads of Port Wenn beside the Doc, as he skilfully, and with a scowl on his face, served his lovable, accident-prone, villagers. ~ Story by Gerald Herter