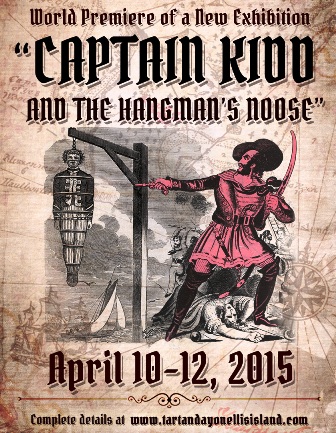 One of North America’s largest Tartan Day celebrations returns for its 14th annual observance this weekend, with a tribute to infamous Scottish pirate Captain William Kidd.

Tartan Day on Ellis Island is produced by the Clan Currie Society – one of the country’s leading Scottish heritage organizations. The Ellis Island event is a highlight of NY Tartan Week – a city-wide festival of all things Scottish.

A regular feature of past Tartan Day on Ellis Island celebrations has been music and dance, and the 2015 program will be no exception; the event will host some of the finest Scottish entertainment, including the Rampant Lion Pipe Band, kilt maker Bonnie Greene, John the Kilted Juggler and a whole host of Scottish entertainers, traditional musicians and maybe a few pirates!

As well, Young Scot award-winner Craig Weir will perform the world premiere of a new pipe tune entitled, “The Immigrant’s Lament.” The tune has been commissioned by the Clan Currie Society especially for the 2015 celebrations.

According to Society president, Robert Currie, “We are absolutely delighted that Craig Weir has accepted our commission to compose a new pipe selection to mark this year’s celebration. The “Immigrant’s Lament” is a haunting tune which captures the essence of a Scots emigrant yearning for his homeland far, far away. No doubt countless numbers of Scots yearned for Scotland as they embarked upon a new life in a new world.”

Inspiration for the lament comes from John Watson Nicol’s evocative painting, “Lochaber No More,” which vividly captures the loss and despair experienced by a Highland coupl as they leave Scotland with just their meager belongings.

Captain William Kidd was a Scottish sailor who was tried and executed for piracy after returning from a voyage to the Indian Ocean. Some modern historians deem his piratical reputation unjust, as there is evidence that Kidd acted only as a privateer. Kidd’s fame springs largely from the sensational circumstances of his questioning before the English Parliament and the ensuing trial. His actual depredations on the high seas, whether piratical or not, were both less destructive and less lucrative than those of many other contemporary pirates and privateers.

About Tartan Day on Ellis Island

Tartan Day on Ellis Island is one of the principal Scottish heritage events in the United States. Playing host to literally thousands of domestic and international visitors each day, it is the largest Tartan Day celebration in the world. Ellis Island is a fitting place to observe Tartan Day. The island and its historic buildings represent America’s “Golden Door.”

Describing the annual program, noted Scottish journalist and author Roddy Martine reported that of all the Tartan Day events held in the United States, the Ellis Island observance has, “stood out as a beacon of what USA Tartan Day is all about: the emigrant ancestors of ordinary Americans who over three centuries crossed the Atlantic Ocean to create the world’s greatest democracy.”

Tartan Day on Ellis Island is produced by the Clan Currie Society – one of the preeminent Scottish heritage organizations in the United States. The Society began their successful collaboration with the Ellis Island Immigration Museum in 2002 in the coordination and sponsorship of their first Tartan Day celebration.

As part of the celebrations for Tartan Day 2011, the Clan Currie Society commissioned a specially designed Ellis Island Tartan© to mark the 10th Anniversary of Tartan Day on Ellis Island.

Each color in the tartan reflects upon the American immigrant experience. The blue represents the ocean that had to be crossed to reach the American shores. The copper-green is the color of the Statue of Liberty. The red depicts the bricks of the Ellis Island buildings where 12 million Americans took their first steps towards freedom. The gold is the “golden door” that is the United States of America and the dawn of a new life in America.