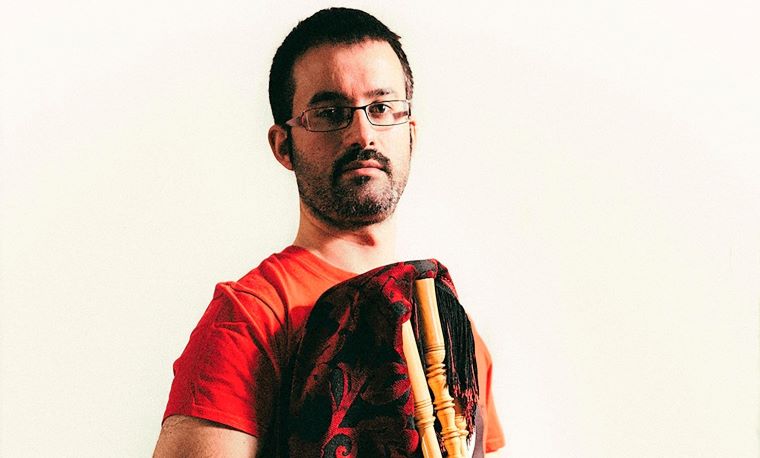 Pablo M. Díaz García, known professionally as Tever, believes that Spain needs to overcome its “low cultural self-esteem.” Residing in the northwest region of the country, García taps into his ancestral culture by playing the Asturian bagpipes.

“Spain has 50 different provinces and in each of there have unique culture, music and language,” says García, who lives in Oviedo, the capital of the Principality of Asturias. “Outside of Spain, people think that our country is only about bullfights, flamenco, and paella, but that is a misperception. While the south of Spain enjoys Mediterranean culture, northern Spain showcases our Celtic heritage. On my first trip to Bretagne in France, I really felt at home, as it was so similar to Asturias.”

García took up the pipes (or, in Spanish, “gaita”) in 1998, during what he calls the “bagpipe boom.” This boom was thanks in part to Hevia (José Ángel Hevia Velasco), an Asturian bagpiper who released his popular tune Busindre Reel that year.

“During this time, many young people in Asturias started to play the bagpipe,” explains García.

Eventually, his hobby became his profession. In 2007, he began playing with the Pipe band Camín de Fierro – a group founded by the councils of Proaza, Santo Adriano and Teberga. “We have released two CDs, one of them this year – they are a mix of rock and traditional Asturian music. We have played a number of large festivals, including Guingamp, Confolens, and the Festival Interceltique de Lorient.”

García has a solo career as well.

“I am a versatile piper. I am a traditional piper when playing in customary settings, but I love exploring different musical styles.” 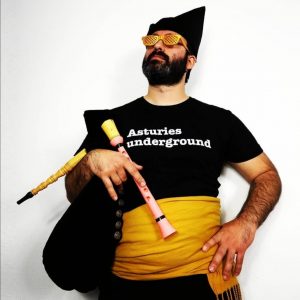 His recent solo project, Fechu’n PLA, is an EP that is being released single-by-single, with each song coming out once a month for six months.

“2020 was a very difficult year for musicians, obviously. In this new world, artists must adapt to these changes by offering different ways to access content.”

Each single has a different theme and multimedia elements. Gaita Hero, for example, includes a video inspired by platformer video games. The protagonist is, appropriately, a man decked out in traditional piper attire, complete with the pipes on his shoulder. And the game’s enemy? None other than a “bug” called COVID-19. The piper crushes the bugs and advances through the levels while the music plays in the background. PC and mobile versions of the game are even available for download, so listeners can try their hand at being “gaita heroes” themselves.

“I think musicians need to master any and all available tools to create and share their own style. In my case, I am always trying to evoke emotions and reactions from my listeners. My music creates a certain ambience, and my hope is that people can simply tune-out their problems when listening.”

As if all of that weren’t enough to keep him busy, García also teaches the bagpipes, which he calls “one of the best rewards in the world.” His Asturian Gaita Online course teaches the origins of the Asturian pipes as well as the practical aspects of how to play.

“Nowadays, in Asturias, young people don’t know enough about their own customs and traditions. One of my goals is to share what I know about our cultural history with young people, in their own language. And we absolutely must pass along our Celtic culture to our children.”

Tever’s Fechu’n PLA project wrapped up this past spring, but García is still hard at work. His Pipe band, Camín de Fierro, recently released a new album called Rock and Fierro. García is also working on a book about 20th century traditional musicians on Proaza and Teverga councils, during which he hopes to collect music for a full-length album. On top of that, he is also picking up the uilleann pipes – the Irish version of the bagpipes.

“The bagpipe is an ancient musical instrument, but we should be building new ways to explore its possibilities. I believe that Asturian bagpipes will provide us with all sorts of rewarding opportunities in the future.”