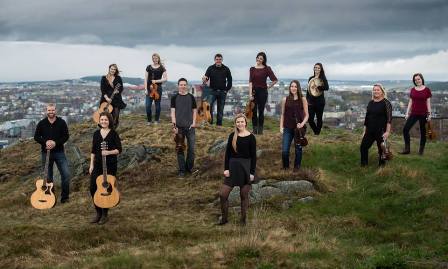 Ask Korona Brophy about her most memorable moment with the Celtic Fiddlers and she takes you back to a show in 2008 on the Isle of Man. The venue was jam-packed, the fiddler recalls, and the group played for 45 minutes. “All at once everyone got up and danced their own style of traditional dancing to our tune. It was a sight to behold for sure!” Brophy says.

Since then, the group has set plenty more people dancing. Brophy, 59, leads the Celtic Fiddlers, a group of 13 musicians based in St. John’s, Newfoundland. Between them, they play a diverse range of instruments, including piano, mandolin, mandola, tin whistle, bodhran, accordion, banjo, bass, guitar and more.

Each member of the group plays at least two instruments, although band member Anthony Chase plays 15. Brophy says he joined at the group at age 12 and is now 18. Last year the band – which has ranged in age from six to 26 years old – had its 20th anniversary. Sixty members attended the reunion, which coincided with the group’s fifth CD release.

Brophy is a classically trained musician who originally studied cello. Following St. Patrick’s Day concerts at schools where she taught, she formed the Celtic Fiddlers. In 1993, the 17 members who made up the group consisted of most of the school orchestra. Brophy describes herself as a traditional Celtic fiddler. “I play mostly tunes that are relevant to Newfoundland and Ireland,” she says.

Brophy is of Irish stock, her parents’ ancestors having come from Waterford and Cork. She describes both families as musical, eager to entertain others whether at a kitchen party, wedding, folk festival or family get-together. In terms of influences, she cites Kelly Russell, a Newfoundland fiddler, as well as Natalie MacMaster. “Also in Newfoundland, The Wonderful Grand Band of the 1970s was a great group of musicians, along with Figgy Duff and The Sons of Erin. These all influenced many musicians to perform this great genre of music in our province.”

As her own personal accomplishment, Brophy cites the fact that she plays by ear and arranges the harmonies for the group, particularly for the waltzes and ballads. She points out she’s arranged a number of the pieces for the band’s five CDs since 1999. “My technique has improved greatly by watching other fiddlers and listening and learning challenging music from the great fiddlers,” she says.

The biggest challenge Brophy faces is finding music that the group as a whole likes and agrees on. She notes that months can pass while they search out new tunes, but then suddenly they’ll have five or six that the band likes. “I think that it’s important to like the repertoire you are playing as it can affect your enthusiasm on stage and the audiences’ engagement.”

Still, the latter doesn’t appear to be a problem they’ve faced. On a recent trip to New York Brophy said the Celtic Fiddlers amazed audiences not only with their talent, but the depth of knowledge they had of the Irish repertoire. A New York pub owner told them, “I have never seen the likes of the talent – brilliant!”

Every second year the group travels outside the province so in 2015, the Celtic Fiddlers will remain in Newfoundland since they have just completed a New York tour. In New York, the ensemble played at the Canadian Consulate, the Canadian Association of New York, the Irish Christian Brothers and a few pubs and sessions. “It was a fabulous experience for all of us, as we were ambassadors for our province and our country,” Brophy says.