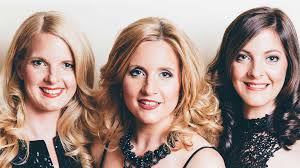 The Ennis Sisters – Teresa, Karen and Maureen – were born into a “musical family” in Newfoundland and Labrador.

“Dad was an excellent button accordion player, which is a traditional Newfoundland instrument, and mom played piano and guitar,” shares Teresa, the youngest of the siblings. “They passed their love of music on to each of us.”

She adds that the family’s penchant for melody is likely rooted in their Irish heritage. “We traced our Irish roots back to 1796, when the first Ennis landed on the shores of Newfoundland.”

It was eldest sister Maureen who was the first of the trio to be bitten by the music bug.

“She began taking piano, violin, guitar and voice lessons,” says Teresa. “Karen and I eventually joined her in voice lessons and we learned how to harmonize. As pre-teens and early teenagers, our voice teacher entered us into a family music category at The Kiwanis Music Festival, where someone in the audience heard us and asked us to perform at a local fundraiser. From there, we were invited to perform at folk festivals around our home province.” 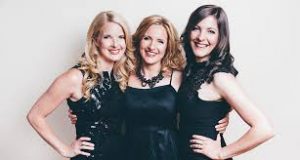 All three sisters currently reside in the province’s capital city of St. John’s. Being in Newfoundland adds a few challenges to their musical career.

“Living on an island in the middle of the North Atlantic puts us at an immediate disadvantage,” admits Karen. “Travelling on and off Newfoundland is not only expensive but adds a half day to most travel days.”

She wouldn’t change it for the world, however.

“Newfoundland is our home and we couldn’t imagine living anywhere else.”

“Not only are our roots firmly planted here, but we don’t have to look too far for find inspiration for our music and stories. It is what makes us unique in the world.”

The Ennis Sisters’ first recording, Red is the Rose, was released in June of 1997. They have since released nine additional albums, including two Christmas-themed albums, a self-titled record, and their latest effort Keeping Time.

“When we first started playing together, we performed mostly traditional Newfoundland and Irish music,” explains Karen. “We had a very raw talent and organic sound. Since then we have explored many different musical paths, and Maureen has evolved into a talented and successful songwriter. We were signed to Warner Music in the early 2000s, and recorded more of a pop-country style. By 2008, we found our way back to our roots.”

As their confidence in performing grew, the group’s stage presence evolved over time as well.

“Now, we incorporate stories, recitations, Irish dancing, comedy, as well as some very moving moments,” shares Karen. “Our audiences often find themselves laughing one minute and crying the next. Our harmonies have gotten much tighter with the more complicated parts. We always try to push out of our comfort zone on each project.”

Keeping Time gave the girls the opportunity to work with former Great Big Sea frontman Alan Doyle, who produced the album. It was both an exciting and emotional journey. 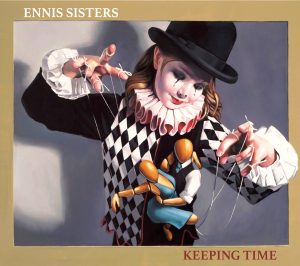 “We began writing this CD around the time of Karen’s wedding,” recalls Maureen. “The title track – Keeping Time – inspired the concept for the project. During this period, we watched our father lose his battle with lewy body dementia and it definitely affected the tone of the album. We became very aware of how precious and fleeting time really is.”

Working with Doyle meant “a lot of homework” for the siblings, but it paid off, allowing them to enter the studio fully prepared. As a result, they recorded the project in just three days.

“Alan helped us get the best out of every song,” notes Maureen. “It was the first time we recorded our voices at the same time. In order to pull this off successfully, we had to know our parts inside and out.”

The response to the album has been extremely positive, and the Ennis Sisters have already had the chance to showcase the new material both at home on “The Rock” and at festivals in Nova Scotia, Prince Edward Island and Ontario. Currently, they are preparing for five weeks of Christmas concerts leading up to the holidays.

“It is amazing to look back over the past 20-plus years of our musical journey and realize how far we’ve come personally and professionally and exciting to think about what’s yet to come,” says Teresa. “I guess we have our parents to thank for all this.”