Singer, writer, actor, teacher…Gillebrìde MacMillan is at the forefront of the Gaelic Renaissance.

Tell us about your heritage.
I am from South Uist in the Outer Hebrides of Scotland. Gaelic is my first, native language and I learned English in school. Gaelic was very much the language of the community and the family and I learned the Gaelic traditions and customs growing up in such a rich cultural and linguistic environment.

Where do you currently reside, and how old are you now?
I am now 40 years old and I live in Glasgow. Although I go back to Uist a lot, I am working as a lecturer at The University of Glasgow where I teach Gaelic language, literature and song. I have, however, lived in various places that have influenced me, including Galway, Ireland, for 4 months while learning Irish, and Galicia, Spain, for 7 years. My wife is from Galicia. 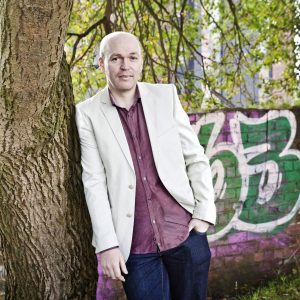 When and why did you start playing music?
Song was a huge part of growing up in Uist. I was influenced by some of my singing teachers, such as the tradition-bearers Catriona Garbutt and Iseabail T. MacDonald. I used to compete at Gaelic singing competitions, and I won all the main prizes as a child. However, I did not really enjoy singing in front of an audience in my teenage years – I am quite shy – so i didn’t sing again in public until I was 22. Then I sang in the adult competitions at the the National Mod and won, and I have just carried on singing from there. It wasn’t really planned, but people kept asking me to sing and it has snowballed from there. I started writing songs about 10 years ago. At first I just kept them to myself. I went to the Isle of Canna for a week and came back with 7 songs – an inspired week -and I thought that it would be good to share them. And so here I am now with an album of new Gaelic songs.

Are the reasons you first got into music the same reasons you remain involved?
Today, I really enjoy singing, and over the last number of years I have been very fortunate to have performed often in North America. My role as Gwyllyn the bard in Outlander has taken me to Fergus, Ontario, New York, and New Jersey amongst other places. I have also developed strong links with An Comunn Gàidhealach Aimeireaga (ACGA) – a group that teaches and promotes Gaelic language and culture in North America – and that has afforded me the opportunity to perform with them in Ohio, Pennsylvania, and North Carolina. I have seen first hand the interest that people all over the world have in Gaelic culture, and it really is a wonderful thing for me to sing, create and teach songs to those who love the music. I have also performed at Pipes of Christmas in New York and New Jersey, and the Clan Currie has been very supportive of my artistic practice. In fact, a song on the new album is dedicated to that ancient bardic family.

How have you evolved as an artist over time?
I have always sung traditional Gaelic songs – some as old as 500 years – and I love these songs. However, it is important that Gaelic be seen as a language that is alive and vibrant, and one that deals wth contemprary issues. As such, my new recording focuses on some of the social, political and cultural issues of our time.

What are the challenges involved with the vocation?
I have been a lot busier in terms of my singing over the last 4 years – mainly as a result of Outlander – so the main challenge hass been balancing that with a young family, and other work committments.

What are the rewards?
I have been so lucky to meet so many wonderful people from all over the world who are interested in Scottish culture and language. I have also been fortunate to work with some of the best musicians in the world, including Mhairi Hall, Rosa Cedron, Julie Fowlis, and Natalie Haas. I also performed this year with the BBC Scottish Symphony Orchestra.

How would you describe your sound today?
It is a contemporary sound, though firmly rooted in traditional Gaelic and Celtic music. It is important for me to have a modern sound, but it is also impossible not to be inspired by the wonderful songs, bards and instrumentation that came before.

What have been some career highlights?
Certainly singing in Outlander has been the greatest thing to happen in my career. As a result, I have gained much more exposure to the wider world than I might have otherwise. It is not that I have changed my style of music as such, only that more people are now aware of it. It was also a wonderful production to work on, and I have met so many people as a direct result. Diana Gabaldon has also been incredibly supportive of my music – she has even written a foreword for my new album.

Is your creative process more ‘inspirational’ or ‘perspirational’?
My own songs are “inspirational.” I won’t write anything for a long period, but when I have time and stillness to think I might create a song in an hour or so. For me, there is no point in trying to compose a song if you are not in the write frame of mind to do it. So I need to take more time out to compose songs!

What makes a good song?
The words and the songs come at the same time for me. A line of a song comes with a melody line and then I just add line after line with the melody. A good song in my opinion needs a strong melody, good lyric,s and a great arrangement. Easy as that! But, in all seriousness, each of those three things are often difficult to do individually. I am delighted with all the arrangements on the new album. In fact, I am thrilled with the melodies and the lyrics too. Everything just seemed to align perfectly in terms of the sound and music.

Do you have a favourite track on Freumhan Falaichte?
It’s funny – my favourite track changes every time I listen to the album. I love hearing from people about their favourite tracks. Some of the faster songs, such as Baile nam bàrd and Duan an Fhògarraich or Santiago, are great for tapping and dancing along to. Some are more contemplative. A couple – Am bàl and Tha mi sgìth – were composed for my parents. So my favourite changes all the time! 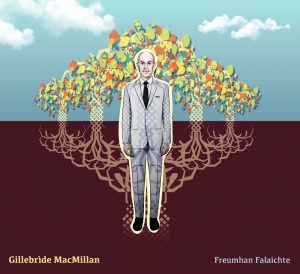 What has the response been like so far from those that have heard it?
Absoluetly fantastic. I have had some wonderful feedback on social media and on radio. People have been writing to me from Australia, the U.S.A., Canada, England, Scotland – all with beautiful messages about how they have enjoyed the music and the lyrics. Rona MacDonald, a bilingual poet from Uist, created English poems from the Gaelic originals so that people reading the lyrics in translation can better understand and appreciate how poetic Gaelic is.

What are your thoughts on the current state of the Celtic/Gaelic music scene?
It is all very positive at the moment. Julie Fowlis has a huge following all over the world and there are many other great singers and bands as well, icluding Dàimh, which tours a lot in North America. Other great Gaelic songwriters include Whyte, Mary Ann Kennedy and Eilidh MacKenzie. I have been very lucky to sing Gaelic song to thousands of people and it always amazes me just how passionate people are about Gaelic music.

Is enough being done to preserve and promote the Celtic/Gaelic culture generally?
Yes – some wonderful things are being done to promote and preserve Gaelic culture. We have thousands of pupils in Gaelic schools throughout Scotland, and there are a number of excellent archive projects here, including Tobar an Dualchais and DASG. All these help to preserve and promote the culture. It is so important that we inform future generations and help them to develop a greater appreciation of Gaelic.

How can this be improved?
I think normalization of the language is key. As people in the not-too-distant past were punished and beaten for speaking the lanuguge, there can be a reluctance to speak it in some situations. By making it a language of normal communication, we can change that mentality. Incorporating the language into modern music, or on TV shows like Outlander, proves that there is a value in the language. Speaking it needs to become a badge of pride.