The Glory of GlenAllachie

Like many an Anorach – an extreme sub-species of whisky nerd – I was gutted when I heard the news that Billy Walker and his team had sold the BenRiach Distillery Co. to Brown Forman two years ago. For the previous 12 years, BenRiach, and its sister distillery Glendronach, were two of the most dynamic and innovative of Scotland’s distilleries.

They catered their brands not just to the general public but also to whisky aficionados and collectors, with interesting limited releases and lots of single casks. What I didn’t know at the time was that Walker didn’t want to sell. His partners, however, wanted out, and the Brown Forman offer was just too good to turn down.

I recently bumped into Walker during my first ever visit to the GlenAllachie Distillery. In the 12 years that I had worked closely with his other brands, our paths had come close to crossing, but we had never actually met. Walker and a new consortium were still digesting their purchase of the GlenAllachie Distillery in late 2017. After selling The BenRiach Distillery Co. the year prior, Walker told me that he was eager to find a new project. He approached Pernod Ricard, from who he had bought BenRiach (2004) and Glendronach (2008), with a proposition to help them bring their Scapa single malt from the Orkneys more to the fore. The offer was politely rebuffed, but they came up with a tantalizing counter; would he be interested in buying GlenAllachie Distillery? The answer to that question should now be self-evident. 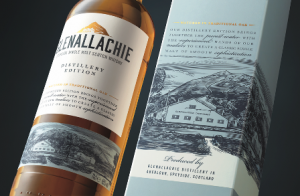 Glenallachie Distillery was built in 1967 at the height of a major whisky boom, opening a year later just outside the Speyside village of Aberlour. The distillery was commissioned by Mackinlay McPherson, the company which had provisioned Sir Ernest Shackleton’s expedition with whisky in 1907. Blended scotch whisky skyrocketed in demand through the 1960s and early 1970s, prompting producers to increase capacity and lay down ever increasing stocks of malt whisky. The industry, however, way over-shot the mark.

Distilleries that had either just gone through major upgrades, or which – like GlenAllachie – had only opened a couple of decades earlier, were permanently closed, mothballed or sold. GlenAllachie shut its doors in 1985 but would reopen just 4 years later under new ownership. The distillery was relatively new and modern by Scottish standards, and an attractive acquisition for a company looking for a workhorse to serve their blends.

Under the ownership of Pernod Ricard, the whisky became an important component of the Chivas Regal blends. Only a handful of official single malt bottlings were ever released, primarily under the Chivas Cask Strength label. These whiskies were not readily available, however, and independent bottlings have been surprisingly rare.

As part of the acquisition, GlenAllachie’s new owners assumed nearly 50,000 casks of maturing spirit. True to fashion, Walker was quick to sort out which casks were maturing nicely, and which needed to be re-racked into better quality wood. As with Glendronach and BenRiach, different cask types were acquired for finishing and maturation. He has also tinkered with Glenallachie’s new make spirit, telling me “the spirit is good, but I can make it even better!” Glenallachie has always been known as a big, though soft and fruity malt. Under the new stewardship, GlenAllachie has slowed its fermentation and distillation to encourage an even fruitier, though more muscular spirit. The facility is also now laying down casks of peated spirit – about 20 per cent of total current production.

The distillery is not yet set up to receive visitors, though they have made some exceptions for friends in the trade. A visitor center is planned, but its construction is still some time off as well. Consumers won’t need to wait too long to start seeing expressions of the whisky however; a core range of 10, 12, 18 and 25-year-old whiskies is being rolled out in Canada this fall. I had a chance to sample both the 12 and 25-year-olds with Walker at the distillery, and they did not disappoint! ~ Andrew Ferguson