The Heart of the Celtic Arts 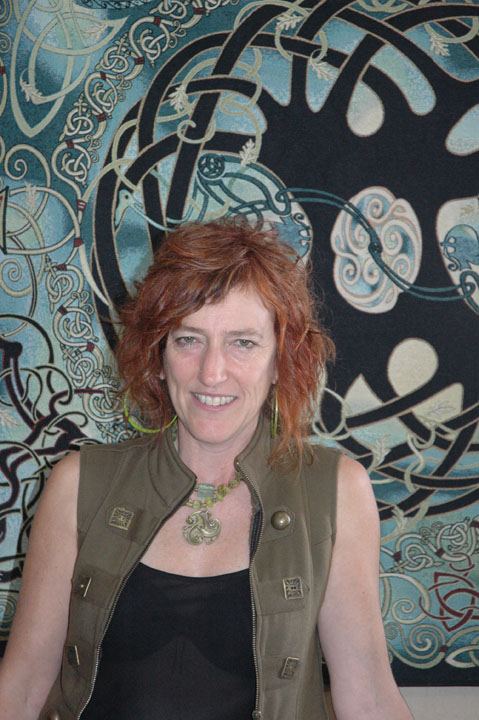 “We Are Everywhere” shouts the slogan on the Celtic knot tee-shirt. The colourful chemise hangs inside a vendor’s tent at the Antigonish Highland Games in Nova Scotia, alongside a kaleidoscope of Celtic-themed clothing, accessories, jewelry, instruments, glassware, ceramics, paintings, photographs, books, magazines, CDs, movies and miscellaneous trinkets.

Dozens of curious customers mull about the display, many wearing family tartans, crests and kilts, looking to take a piece of their past home with them. The selection is endless, and the sentiment is clear; Celtic culture is alive and well here, and everywhere.

As evidenced at Highland Games, Celtic Festivals, retail outlets and online stores, the Celtic arts are flourishing. And while some creative types contend that they remain marginalized economically, the numbers tell an encouraging story; since 1990, the niche-market sector has grown into a world-wide $100 million per-year industry.

There is both rhyme and reason for that evolution; the Celtic brand has gone global, materials and resources are easier for artists to obtain, websites and social media networks have increased artist visibility exponentially, and the rise in numbers of both baby-boomers and the “Creative Class” means that more disposable time, income and attention is available for the arts.

Perhaps, however, it is something more primal – more familiar – that keeps us going back to that vendor’s tent at the Games, that retail outlet or that online store.

Like the tributaries of a river that trickle out to the sea, the veins of Celtic art flow to and from our collective heart, beating with a rich and rhythmic cultural identity. It is here – in this heart-space of belonging – where classic and contemporary art and archetypes converge, reaching deep to reflection, reminding us of who we are and of where we come from.

Visual artist Jen Delyth grew up in South Wales, near Swansea, Port Talbot, and the beautiful Gower Peninsula. Her heritage is a mix of Welsh and Cornish.

“My great-grandfather – I remember him as a very old man, sitting in his armchair by the fire with his cloth cap and pipe. He came to work in the steel works of Port Talbot, when the tin ran out in Cornwall, at the turn of the century.”

A self-taught visual artist, Delyth followed her heart to California when she was 25, settling into the San Francisco Bay area.

“I was quite homesick at first – we call it Hiraeth in Welsh – longing for the homeland – and my love and respect for the rich culture of my home country grew stronger as I realized what I had left behind, or perhaps what I had brought with me.”

She has been fascinated by folk tales and mythology since she her childhood.

“My mother shared her love of Welsh culture with me. When I came to California in 1985, I was captivated by mythologist Joseph Campbell’s wonderful lectures with Bill Moyer. He talked about the wisdom traditions at the heart of folk cultures around the world – but did not seem to focus much on the Celtic – which lies at the roots of our own western tradition. That inspired me to use the ancient visual language to start “dialoguing” about the mythic symbols and figures of my own culture, and to shine a light on the power and spirit within our natural world.”

To her surprise, her initial works were well received.

“I quickly realized that there is a strong connection here for many people whose ancestors made the journey to the new world.”

Following the “modern primitive” tribal arts movement of the 1980s – especially the strong interest in Celtic spirituality from Christian and pagan communities, ecologists, healers and nature lovers – Delyth launched her art and textile business, connecting with publishers, setting up a studio, and traveling to Celtic events and celebrations across North America.

“Making a career with Celtic Artwork has been possible for me because of the interest here, in a way it may never have blossomed back home, where we often take it somewhat for granted.”

She is encouraged by the revitalization of Celtic culture in Wales.

“I love going home and seeing the news, soap operas and great programming all in Welsh on the television. Today the Welsh language is more widely spoken and encouraged, and not repressed as it was in my grandmother’s time. We are a modern Celtic nation, forwards looking, and proud of our cultural heritage. In the “immigrant” countries of USA, Canada, Australia and elsewhere, I meet many folks at shows who appreciate their Celtic heritage.

“Celtic culture is a living tradition – recalling the past as it reinvents itself.”

Montreal storyteller Mike Burns is well aware of his roots.

“I was born and bred in Cahirciveen, Co. Kerry, Ireland in 1953. I am the eldest of five children. My family has been in Iveragh for generations – the Burns are from Sneem. My great-great grandfather, Cornelius Burns, moved to Cahirciveen in 1867 after the Fenian Rising. He was a cart-wright. The O’Connells – my mother’s people – were fishermen from Beginis, a small island beside Valentia. My grandfather, Mortimer, was one of the 1500 people who went out in Easter 1916. He was interned in Frongoch. He escaped later and went on his keeping in Kerry and West Cork during the War of Independence. Then we have O’Sheas and Keatings in the family too – all South Kerry to the bone.”

The shanachie’s gift of the gab came naturally as a youngster.

“We had no television until I was 14 – nobody did. And no phone. There was the radio, or the one film a week at Ma Breen’s cinema, and that cost a tanner – not a thing that was always in plentiful supply.

“So around the turf fire was the place to be when the nights were lengthening. And our door was always open. You never knew who would arrive and pull up a butter-box or a stool. People in Ireland had great respect for a good singer or a good teller – they still do. So I grew up with that reverence and appreciation. I still have it.”

Burns’ passion for a well-timed turn of phrase, or the naming of places, was passed down to him from his father.

“There was great meaning in the old Gaelic names. An example – 5 or 6 miles from the house I was born in, there is a pass in the mountains called “Bealach Oisin.” Well, that would bring you the story of Oisin on his journey back from Tir na n’Og on Niamh Cian Oir’s horse, 2000 years ago.”

“We are hard-wired to look for pattern, for meaning, for narrative. We have been doing this for tens of thousands of years, ever since the advent of fire and language.”

“I know a quare few stories, and I love to introduce people to our culture, our old ways.

They say at home that the only way to keep a story is to give it away. There’s great pleasure in a good night of storytelling – both for the teller and for the listeners. As I mature, and now with grown-up children of my own, the stories speak to me in new ways, and it is fascinating to find new insight in these tales that I have known for nigh on 60 years.”

Born and bred on the beautiful Isle of Man, singer-songwriter Ruth Keggin is a product of her environment.

“My Dad’s family has lived here for hundreds of years. My Mum is half-Manx, going back many generations, and half-Scottish.”

Like Delyth and Burns, Keggin was exposed to Celtic culture from a young age.

“My Mum sang to me all the time, and my Dad played a lot of folk and traditional music records in the house and on our family trips up to the Hebridean Islands and around Ireland. I started learning music formally when I was about ten – I begged my parents to let me have flute lessons at school. I spent many happy years in orchestras, bands, choirs and playing Manx traditional music before going away to study music at University.”

The rewards of pursuing her passion have been immeasurable. “I feel privileged to be able to spread awareness about our music, language and culture.”

“For example, I was touring in Norway recently and people were really intrigued about the Isle of Man and very excited to hear that it has the oldest continually running parliament in the world – established by Vikings!

“Learning songs in other languages has been really exciting for me also – I sing in a group called the Norwegian-Manx Collaboration, and I also have been singing in Irish and Scottish Gàidhlig, alongside Manx, in a new Inter-Gaelic vocal trio called Aon Teanga. Irish and Gàidhlig are very similar to Manx Gaelic, but still different enough to give your brain a workout.”

Keggin is impressed with efforts to keep Celtic culture alive.

“Speaking from first-hand experience in Europe, and my perception of what is going on in North America, it seems that those people who are already working to preserve and promote Celtic culture are doing a fantastic job. As a Celtic traditional musician, of course I would love for more people to discover the richness of Celtic culture and heritage.”

At just 22 years of age, Dundee, Scotland-born piper Craig Weir has already been playing for 13 years.

“My Great Uncle Jack plays the bagpipes and offered to teach me the instrument. I never had an interest in music at all until that point, but my family suggested that I give the pipes a try. After him, I moved on to other tutors, including Ryan Kennedy, Morag McKenzie and Harry Ellis.

“I never ever thought I would enjoy playing as much as I do now. Music is such a massive part of my life.”

Weir says that he continues to play, not only for himself, but also to bring greater attention to Scotland’s national instrument.

“Playing for the Dalai Lama in 2012 was a massive honour, and a day I will never forget. This past January I performed on stage with Queen and Adam Lambert on the Glasgow date of their world tour. Then, in July this year, I performed on stage with my favourite band, The Libertines, as they headlined Scotland’s biggest music festival in front of 80,000 people. I have been very lucky to see many parts of the world through my concerts, including the U.K., Ireland, Switzerland, China, Belgium, Faroe Islands, Germany, USA, France and Italy.”

He prides himself on being able to perform both classic and contemporary styles.

“It is important to play traditional marches, strathspeys and reels because these are the traditional sounds that people associate with the bagpipes. However, music is always evolving and the pipes should not be left behind in that. This was one of the main reasons that I formed my new band Gleadhraich – we fuse bagpipes with rock, pop, ska, and all sorts of genres and styles. I hope that in doing so that people of all ages will be more encouraged to pick up the instrument.”