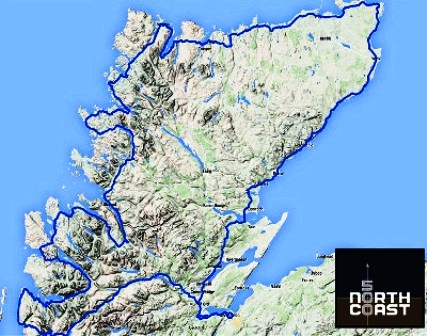 There’s nothing quite like the freedom of the long open road; never-ending back roads, wide meandering paths, and hidden trails through coastal scenery are just a few things you can expect on Scotland’s best touring route, the North Coast 500.

What is it?
Scotland’s answer to Route 66, this 500 mile coastal route spans the north coast of the Highlands taking in the best bits of this glorious region.

Where does it start?
The route starts in the northern city of Inverness, then weaves along the west coast to Applecross and then northwards towards the bustling towns of Torridon and Ullapool. From there, you’ll venture to some of the most northerly coastal points in Scotland, passing by Caithness and John o’ Groats before heading south again  through Dingwall and finally back to Inverness.

What is there to see?
From a tiny castle to several towering Munros and even an ancient sea stack, a vast array of enticing places await visitors along the way, so cameras at the ready!

Castles
Explore the crumbling ruins of Ardvreck Castle on the edge of Loch Assynt, just north of Inchnadamph. Just south of Brora, you’ll come across Dunrobin Castle, a French-style chateau. Inhabited since the 1300’s, the castle was a war hospital during the First World War.

Mountains
If you fantasize about finally bagging a Munro or fancy roaming the varied terrains of the rugged mountain ranges, the tall and shrouded peaks of Ben Hope, An Teallach or Suilven are calling you. These northern climbs are remote, challenging and beautiful, offering unparalleled views of the dreamy Highlands.

Beaches
Whether you’re looking for secluded sands, epic surf or pure natural beauty, the beaches of the northern Highlands have it all. You’ll find a few unexpected discoveries too. At Achmelvich Bay, explore one of the tiniest castles in Europe, known as Hermit’s Castle, or witness all sorts of marine life at Gairloch Beach. Swap the road with a deserted beach for the night, and wake up to the sound of crashing waves.

Natural wonders
Your journey will take you through landscapes framed by ancient geology. At the northern tip of Scotland, Smoo Cave is a beguiling and mystical limestone sea cave, home to one of the largest entrances to any sea cave in Britain with height of 50 ft, not to mention a spectacular cascading waterfall in wet weather. Marvel at the Old Man of Storr, a 60 m high sea stack sculpted from Torridonian sandstone which towers between the north-west Highlands and the Hebridean isles of Lewis and Harris.

For foodies
It’s not just your motor that needs refueling. This corner of Scotland has plenty of mouth-watering food and drink to delight your taste buds. Try the fresh seafood at the Kishorn Seafood Bar in Wester Ross or stop off at the Lochinver Larder for what have been deemed the ‘best pies in the Highlands’. Find yourself in need of a little sugar kick? We recommend an indulgent hot chocolate at Cocoa Mountain or a wee home baked treat at the Whaligoe Steps, a hidden café just off the A9. Or, you could always stop for a Scottish picnic in the great outdoors and enjoy the scenery at the same time as sampling the region’s scrumptious specialties. Travelling can be thirsty work. Stop for a dram with some dancing and traditional music thrown in for good measure at the Ceilidh Place in Ullapool and spend a night in the cozy inn. Or, try a tipple at one of the famous distilleries at Old Pulteney or Glenmorangie.

What’s the best way to travel?
Whether you’re cruising in a vintage campervan, a motorbike or just taking a section on foot, there are many ways to take in the views along the North Coast 500. Choose a section, or do the whole route – it’s up to you!